India displace New Zealand to become No.1 Test side in the world

India displace New Zealand to become No.1 Test side in the world

India won the fourth and final Test against England on the third day itself to seal the series by 3-1 thereby qualifying for the final of the World Test Championship as well. India and New Zealand will face-off in the final now to be crowned as the winners of the inaugural edition of WTC in June. India’s unbeaten streak at home in Tests as this turned out to be their 13th consecutive series win.

England, on the other hand, will be ruing the fact they missed a chance to beat India at home after winning the first Test. With this series win, the Virat Kohli-led side has also made it to the top of the pile in terms of the ICC Test rankings displacing New Zealand. The Kiwis had 118 points after their terrific home season and India now have 122 points to their name after a brilliant series win.

The four-match Test series wasn’t a straight-forward one for India as they lost the first Test in Chennai thanks to a stunning double-century from England skipper Joe Root. However, like they have been for some time now, team India bounced back brilliantly winning the second Test, and then it was all one-way traffic. England batsmen weren’t able to cope up with the spin bowling and crumbled almost every time they batted after the opening Test.

England and Australia at number 3 and 4 in Test Rankings

Meanwhile, England have slipped to the fourth position after losing three consecutive Test matches in the series. They now have 105 points while their arch-rivals Australia are at third place with 113 points. There is a big gap between the top four and bottom six in terms of points. Pakistan (90), South Africa (89), Sri Lanka (83), and West Indies (80) are next in the rankings.

As far as India and England are concerned, the two teams will next face-off in the five-match T20I series starting from March 12 with all games set to be played in Ahmedabad itself. England’s tour will conclude with three One-Day Internationals after which the 14th edition of the Indian Premier League (IPL) will be played. 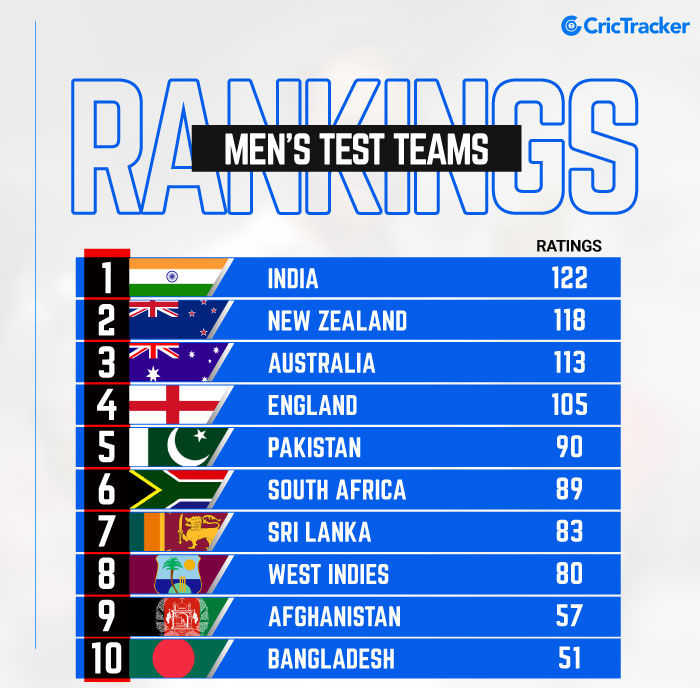