Rohit Sharma copped a blow on the thumb during a practise session after which physio Nitin Patel treated him.

Ever since their World Cup semi-final against England, Australia are yet to play an ODI. After six months, Aaron Finch and Co are now set to resume 50-overs cricket on their tour of India. The opening match is scheduled to be played on Tuesday, January 14 at the Wankhede Stadium in Mumbai. The Aussies are coming off a strong home season and hence, would be in good stead.

Moreover, the fact that last year they defeated India 3-2 after being 0-2 down would give them confidence. On the other hand, the Men in Blue, started 2020 with a resounding 2-0 win in the T20I series against Sri Lanka. Virat Kohli’s men also beat the West Indies in a couple of ODI series’ after the World Cup. But Australia won’t be easy proposition for them by any stretch of the imagination.

Out of 21 ODIs at the Wankhede Stadium, 11 have been won by the team batting first. But since dew is likely to settle in, batting second seems to be the wisest decision as of now. It’s generally a high-scoring venue and fireworks can be expected. The temperature will be around 27 degrees Celsius under the natural light and will come down to 24 degrees. The humidity will mostly be in the 50s.

Rohit Sharma copped a blow on the thumb during a practise session after which physio Nitin Patel treated him. But since there’s no official confirmation, hence, it’s most likely that he will play. Shikhar Dhawan hasn’t had much of a hit in the ODI format ever since his injury in the World Cup.

Kohli remains to be a fulcrum of their setup. Shreyas Iyer would wish to carry on with the rhythm he has been in. It’s also a chance for Pant to show consistency. Jasprit Bumrah hasn’t played ODIs after the World Cup and he will be in for a stern challenge, bowling to the power-packed Aussie batting.

It won’t be a surprise of Marnus Labuschagne gets his maiden ODI cap. David Warner and Aaron Finch flourished together in the World Cup and carried their form over in the T20I format as well. Steve Smith has exceptional numbers in India and his role will be crucial in challenging conditions.

Peter Handscomb got a century the last time the Aussies played ODIs in India. Alex Carey and Ashton Agar add depth to their batting. Starc, Hazlewood and Cummins will be shouldering the pace department. Zampa did well in India last time around, and he will be looking for something similar. 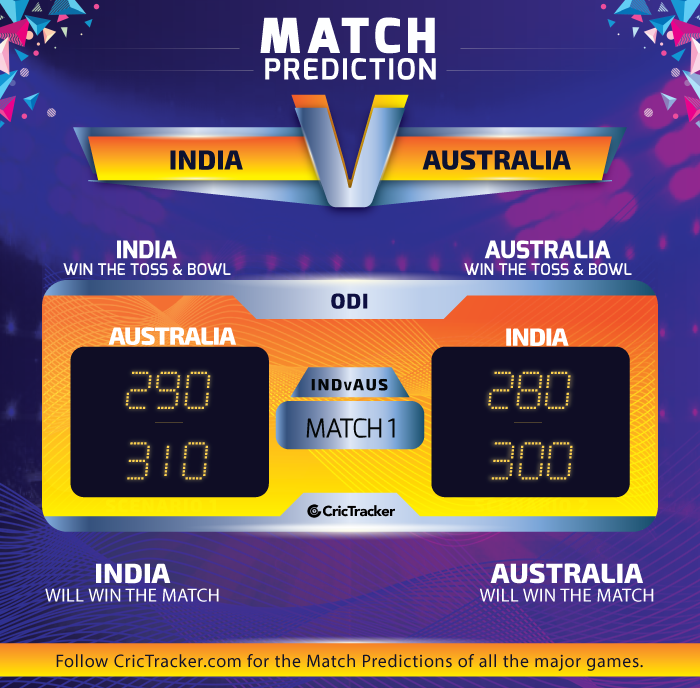