India vs Windies, 4th ODI, Match Prediction: Who will win the Match?

India vs Windies, 4th ODI, Match Prediction: Who will win the Match?

The venue is set to host its first international match ever since the Test match against Sri Lanka in 2009.

After three riveting matches between India and Jason Holder’s Windies, the five-match ODI series is currently locked at 1-1 with two encounters still to take place in the next four days. The next contest is scheduled to take place tomorrow at Brabourne Stadium in Mumbai and both teams have all to play for. The winner of the match will take an unassailable lead in the series.

The Windies would be brimming with confidence for the reason that they denied the home team victories in the last couple of matches in Vizag and Pune. The Men in Blue, on the contrary, have to put on their thinking caps and get back to winnings ways. Meanwhile, the venue is set to host its first international match ever since the Test match against Sri Lanka in 2009.

The pitch is expected to be good for batting and it won’t be surprising if the bowlers would again have to work out of their skins. After how the Caribbean team bowled last night, they would be more confident while defending a target bearing in mind India’s vulnerable middle order. India also may want to put runs on the board and then exert pressure on the Windies.

India are likely to bring in Kedar Jadhav in place of Yuzvendra Chahal, who has been a tad below par in recent times. The hosts are likely to go with their three seamers- Khaleel, Bumrah, and Bhuvneshwar. Kuldeep Yadav is the specialist spinner. The batting lineup won’t be tinkered with but needs to lend appropriate support to Virat Kohli, their skipper.

The Windies will remain unchanged. Powell and Hemraj are the openers with the two in-form batsmen- Hetmyer and Hope to follow. The onus will also be on the experienced head of Samuels. Rovman Powell and skipper Holder are also required to step up. All-rounder Fabian Allen will be persisted with. McCoy and Roach are the seamers along with Holder. Nurse is the spinner.

The prediction is for the Windies to win the match and take the lead. 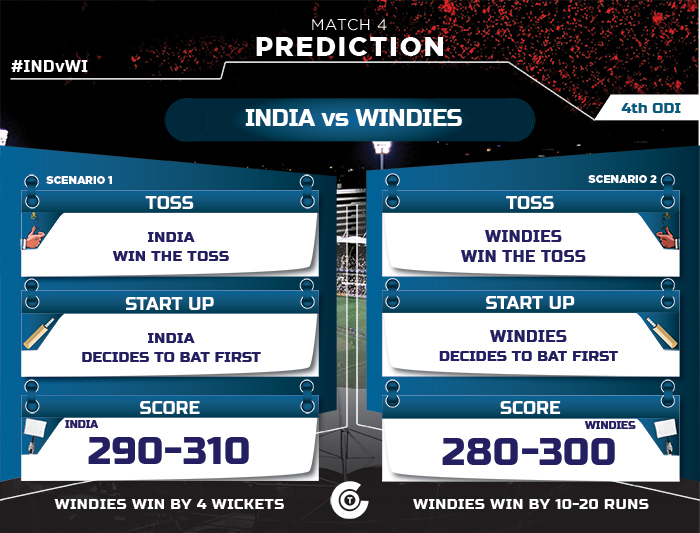