Sophie Ecclestone has been replaced by Alex Hartley in the T20I squad.

After a comfortable ODI series win against England Women, the India Women will gear up for the 3-match T20I series in Guwahati. Injury to Harmanpreet Kaur gives an opportunity to Smriti Mandhana to lead the Indian team for the first time. The T20I series won’t be easy for the Indians given their recent struggles in this format especially in the absence of Harmanpreet.

This series will also give Mithali Raj a chance to bat up the order to fulfil the experience in the fragile batting after Mandhana and Jemimah Rodrigues. The recent middle-order debacles helped Veda Krishnamurthy to make a comeback to Indian limited-overs set up. Some poor performances in ODIs and T20Is since the Triangular series at home cost her place in the squad after the Women’s World T20.

The first game of the 3-match T20I series between India Women and England Women will be hosted by the Barsapara Cricket Stadium in Guwahati.

The Barsapara Stadium in Guwahati could witness a bit of help for the pacers like during the ODI series. The game will be played in the morning and the teams batting find it difficult due to the conditions. The venue witnessed below 100 totals during the U23 Women’s T20 games in 2017/18 season.

Amy Jones turned out to be the highest run-getter for England during the Women’s WT20 on the pitches that were on the slower side. She scored 107 runs across five innings including an unbeaten 53 against India. She scored those runs at a good SR of 113.82. Amy will be hoping for some crucial knocks with the bat after aggregating only 17 runs in the ODI series.

Sophie Ecclestone has been replaced by Alex Hartley in the T20I squad.

(Toss Update) Amy Jones misses out due to illness.

Smriti Mandhana is necessary as captain or vice-captain especially when she plays England or in fact any non-Asian team. She has to be the captain if England bat first as Mandhana scored a fifty in all the five innings while chasing in 2019. Natalie Sciver and Deepti Sharma will be crucial given their all-round skills.

Jemimah Rodrigues can be picked as captain or vice-captain in case India is batting first. Depending on the pitch, the likes of Heather Knight, Poonam Yadav, Danielle Wyatt and other pacers from either side can be considered for multiplier options. 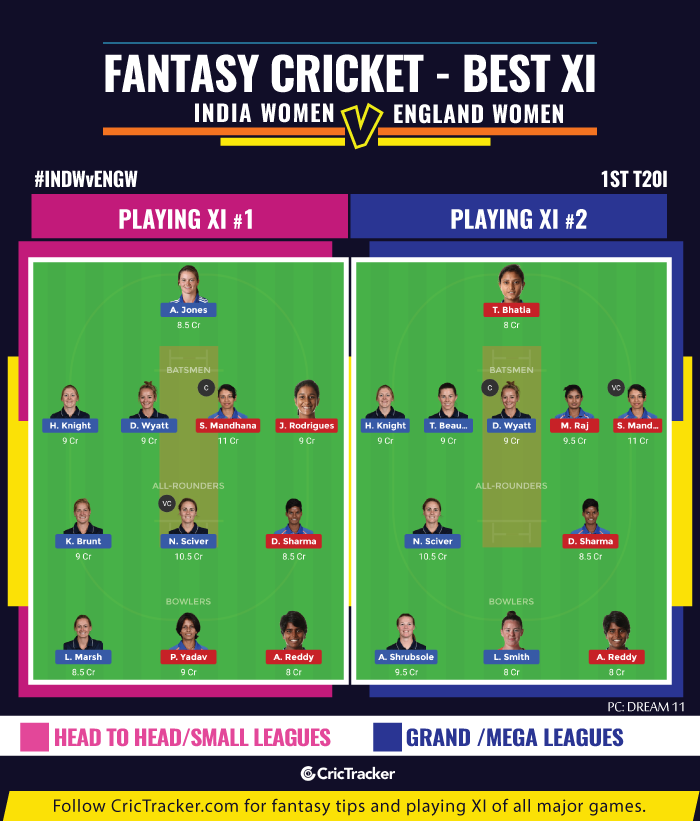 Mithali Raj could find a role in the current line-up in the absence of Harmanpreet Kaur’s experience. She could be seen batting in top four unlike in the final T20I during the New Zealand tour.

England Women are expected to register their first win against India Women on this tour.