Rajiv Gandhi International Cricket Stadium in Hyderabad will host the finale on Sunday 7:30 PM IST May 12.

We are finally at the stage in the Indian T20 League 2019 which we all were waiting. The Indian T20 League 2019 final is here, and the top 2 teams from the league stages will be competing for the biggest T20 prize in world cricket. Mumbai took the direct route of getting to the finals by winning a thriller against the Chennai in the first qualifier. That result meant that the Chennai had to beat a spirited young Delhi team yesterday at the second qualifier.

Both Chennai and Mumbai are set to lock horns and take hold of the trophy for the 4th time. The defending champions, Chennai, will win a second time in a row if they win this season. Rajiv Gandhi International Cricket Stadium in Hyderabad will host the finale on Sunday 7:30 PM IST May 12. Look on at the statistics which can help you to pick your 11wickets Fantasy Cricket XI.

At the Rajiv Gandhi International Cricket Stadium wicket is considered as a flat track. It tends to slow down as any match progresses. The pitch has been famous for being batsman-friendly and high scoring. Also, the spinners will enjoy bowling here more than the Pacers.

Strangely, Mumbai didn’t have a slow start this year. They were always within the top four teams of the tournament and continued their consistency throughout the season. The team has won 10 matches out of the 15 played, and their appearance in the finale against Chennai will be the 16th match for them this season.

The primary reason for such performances has been the two men of their batting line-up. The first one is Quinton de Kock who has smashed numerous fifties in the league matches to the playoffs, and the other one is arguably the best young talent Hardik Pandya. Pandya has been brilliant this year in both the departments of the game. Apart from these two, however, their batting has lacked stability with their middle-order being chopped and changed often during the season.

Mumbai have already beaten Chennai at the first qualifier. Hence, they will draw confidence from the kind of performance they produced with Chennai.

Chennai has won 9 matches out of the 15 played. Chennai suffered a significant blow in the last round-robin fixture where Kedar Jadhav sustained a shoulder injury has to be ruled out for the remainder of the tournament. Which means, Chennai will play tomorrow again without Jadhav in the squad. Deepak Chahar, Harbhajan Singh and Imran Tahir have all been in terrific form with the ball. Also, Ravindra Jadeja and Dwayne Bravo have played their part with justice and with the balance and experience CSK have.

Both the teams have played 27 matches together in the earlier matches, out of which Mumbai succeeded in winning 16 games while Chennai has won 11. Tomorrow is the fourth encounter between the two during this season. During the three earlier meetings this season, Mumbai has succeeded in beating Chennai. 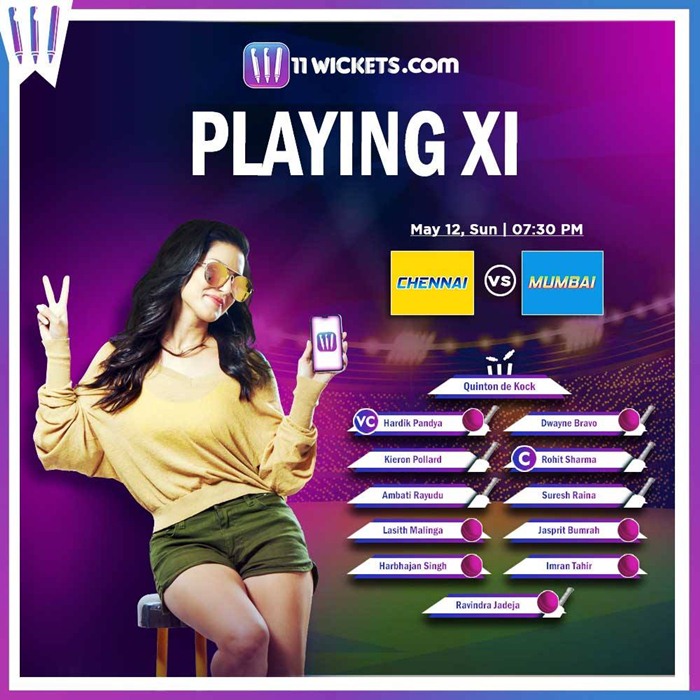 An unsettled middle-order might be a cause of concern for Mumbai in case things do not start well for them with the bat.

Chennai has lost its last three matches it has played against Mumbai, an alarming record for the team.