Must-win for SRH while RCB can only spoil their party.

It has been a season to forget for Bangalore as they became the first team to crash out of the reckoning from the Play-Offs. They will be playing their final game of the season in front of their home crowd at the M.Chinnaswamy Stadium against Hyderabad on Saturday. Hyderabad are one of the four teams fighting for that vacant fourth spot in the qualifiers and need to win this game to have an upper hand in the race for supremacy. Bangalore’s season might be over but they will be the party-poopers as they would want to bow out of the tournament on a strong note.

Fantasy team lovers will look forward to this game. Kohli and de Villiers will be the most sought out players but users have a strict budget to work on. Manish Pandey’s blazing form has carried Hyderabad this far and makes him a smart pick. Saha can strike the meaty blows and can edge out Parthiv depending on the composition of your team.

Chinnaswamy has seen tall scores this year and this game won’t be any different. Despite the runs, Chahal relishes bowling at this ground and should be picked by users due to his ongoing form. Overall, Hyderabad have a slight advantage over Bangalore but that can be nullified in a matter of a few good overs.

Captain: Since de Villiers doesn’t play cricket all year long, he will be keen to finish the season off on a high. With 449 runs at 49, he is in reasonable touch as well. With the ground on the shorter side, de Villiers is always a must pick in Bangalore because it is a risk always worth taking.

Vice-Captain: If there is anyone who can topple de Viliers then it is Rashid Khan. He will look to bowl as many googlies at the former South African captain and hope to sneak past his defences. His returns might be middling this year but an economy rate of 6.11 is stuff champions are made of.

Navdeep Saini’s raw pace has proven to be effective at a placid Chinnaswamy surface in the past. If he can get his lengths right, Saini is more than capable of humbling an inexperienced batting line-up of Hyderabad. 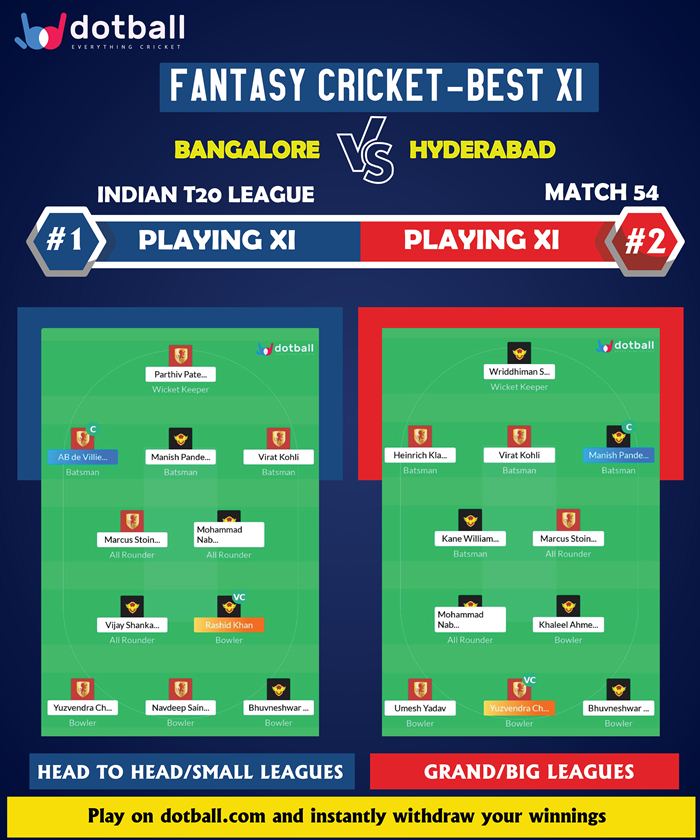 Captain: Manish Pandey’s consistency after regaining his position in the side has been unparalleled. He has struck the ball cleanly and has rotated the strike in the middle overs to keep the scoreboard ticking. Despite his slow start, his season average has rocketed past the 50 mark with a handy strike rate of almost 142.

Vice-Captain: The leg spin of Chahal has fetched him 17 sticks from 13 games at a decent economy rate of 7.98. Chahal has been slick in operation during the middle stages of the game and has encouraged the batsmen to go after him. He is expected to play a pivotal role for the hosts yet again at a ground he loves playing in.

Bhuvi looked off coloured in the initial stages of the tournament but has gotten into his groove of late which has helped him contain runs at the death. He will come hard at the batsmen with the new ball in hand.

Dotball is where you can use your cricketing knowledge to win real cash!

Guptill didn’t get going in his first game but will have to step up in the absence of senior pros Warner and Bairstow. He has enough ability to get his side off to a flying start and get a big one. 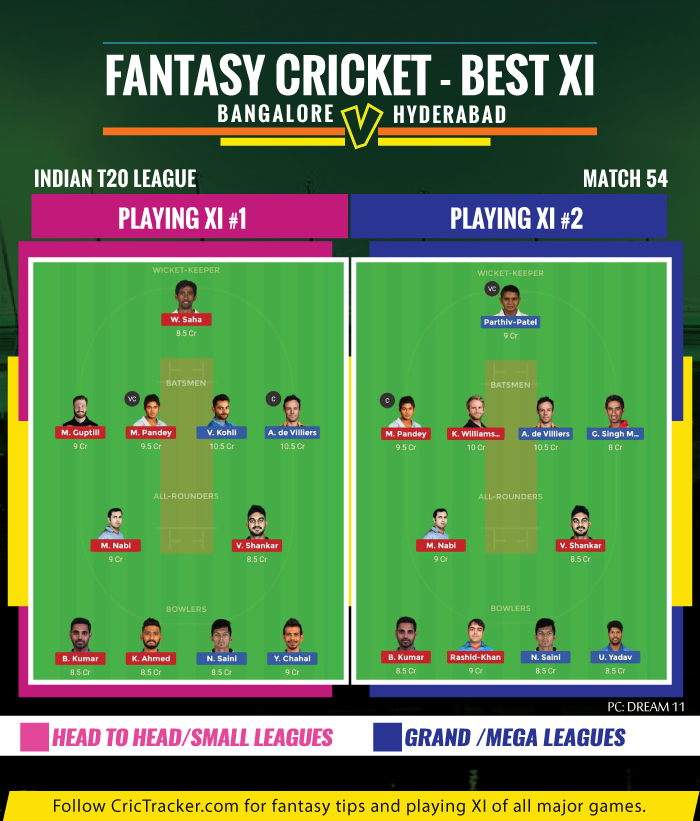 This might be Williamson’s final chance to shrug off his loss of form before he heads off for the World Cup. The Kiwi skipper hasn’t looked assured and has faltered against spin more often than not. He must open the innings as that will give him the best chance to get the best out of himself as a batsman.