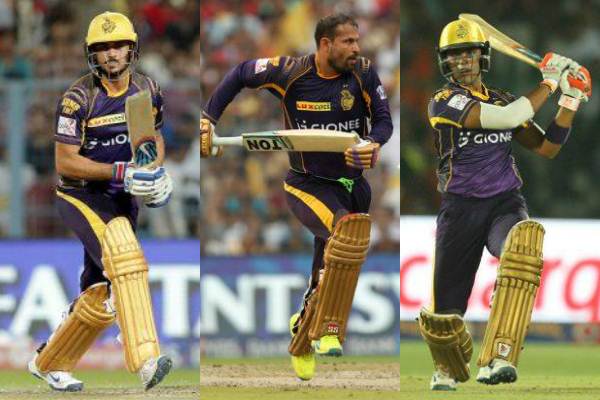 Manish Pandey, Yusuf Pathan, Suryakumar Yadav. (Photo Source: BCCI)Two-time champions KKR did not have the best of times in the previous edition of IPL. But that hasn’t taken away their reputation as one of the most consistent sides in the IPL. They have repeatedly made it into the play-offs since 2012 and 2014. They made it to the playoffs again last year, but lost in the Eliminator to Sunrisers Hyderabad and finished fourth in the table.

This year they may appear a tad bit less threatening due to Andre Russell’s absence at the moment.  And they kept that in mind when they entered the auction as they made the smartest and most precise choice when bidding. It is very difficult for any player to fit into the role that Russell had for KKR, but they have bought players that will hope to make a similar impact.

After releasing several bowling options, it was expected that they would go after bowlers more than batsmen. They went on to acquire several seamers like Chris Woakes, Trent Boult, Nathan Coulter-Nile, Rishi Dhawan, and Sayan Ghosh and seam-bowling all-rounder Rovman Powell. Darren Bravo remained their only big name among batsmen.

Here we analyse their best possible XI for IPL 10:

The Knight Riders batting line-up had been their strength throughout the previous edition. And more often than not, the opening pair of Gambhir and Uthappa had successfully laid down the foundation for their Team and given them a headstart. KKR did not invest in batsmen in the auction because they already possess a star-studded batting line-up, their openers being their most solid foundation.

Skipper Gautam Gambhir had been their leading run-scorer in the previous edition and overall stood 5th among all highest run scorers with 501 runs at an average of 38.50 including 5 half-centuries at a strike rate of 121. Robin Uthappa had also been at his top with 394 runs at an average of 26.26 with 3 half centuries and it is only fitting to let them continue their role as openers. Any change in the current pairing will disrupt the rapport the two share. There is no point in considering any changes in the already established opening slot because these two players have been playing their role responsibly.