Both these sides, despite not being perfect units, have managed to overhaul their weaknesses and found a way to win.

Two teams who looked slightly fragile according to various experts – Sunrisers Hyderabad and Kolkata Knight Riders, made it to the playoffs and fought it out hard against each other in the second Qualifier at the Eden Gardens. Eventually, it was the table-toppers Sunrisers who walked away with the game, literally from the jaws of defeat.

By doing so, they set up a marquee finale against one of the greatest T20 units of all time, the Chennai Super Kings. Both these sides, despite not being perfect units, managed to overhaul their little weaknesses and always found a way to win the game. A lot of credit goes to both captains, Kane Williamson and MS Dhoni.

Whilst we always expect something like that from MSD, Williamson’s purple patch has been such a blessing for Sunrisers. Players like Rashid Khan and Siddarth Kaul did their bit as well, but the way this high-flying Kiwi has led the Sunrisers has been outstanding. Here’s the predicted XI of the Sunrisers for the finale.

Wriddhiman Saha was roped into the XI ahead of his Bengal teammate Sreevats Goswami in the previous encounter, a move which didn’t work badly. He dropped Andre Russell once on the field, but Rashid Khan compensated for his mistake almost immediately. He runs at the top as well, which should boost his confidence.

Shikhar Dhawan became the 8th player in IPL history to go past 4,000 runs and bottled a brilliant start against KKR. It’s now or never for him and considering the side is a little too dependent on him and Williamson for the runs, there’s added pressure on the senior player to perform well.

What a mind-boggling season this has been for Kane Williamson, which escalated his status as a T20 batsman. Talk about leading from the front and the Kiwi has done exactly that. Yusuf Pathan is due a big knock and given SRH wins this game, he’ll become the second player after Rohit Sharma to be a part of 4 IPL winning sides.

There were many debates over Manish Pandey’s poor run and adding fuel to this ignition, he was dropped for their most important game against KKR. But he might as well get back into the side replacing Deepak Hooda considering he’s done well in big games earlier and Hooda didn’t make a lot of difference either.

The Sunrisers have found a new all-rounder after that game against KKR. Rashid Khan has always been a brilliant batsman but the SRH under-used him as a batsman. Nevertheless, he’s one of those cricketers who’ll do the job no matter what he’s asked for by the skipper.

Carlos Brathwaite bowled a horrendous 18th over which cost the Sunrisers the first Qualifier but compensated for it with a brilliant final over against KKR. Shakib took a priceless wicket of Dinesh Karthik, just the way he’s been nonchalantly helping SRH win some close games.

Khaleel Ahmed had a poor outing with the ball, but the speeds he registered was outstanding. Consistently hitting the 140 kph mark, Ahmed on occasions did beat the batters by pace. Bhuvneshwar Kumar has not been at his best this season, but 4 good overs from him can do the job for SRH and ensure they win the title.

Arguably the best speedster for SRH this season, Siddarth Kaul ensured Bhuvneshwar’s poor run didn’t affect their form. He’s thus far picked up 21 wickets and is also eyeing the purple cap. Three more wickets and he will win not just the game, but also become the first uncapped Indian player to win the purple cap.

Here’s SRH Predicted XI for the final game against CSK 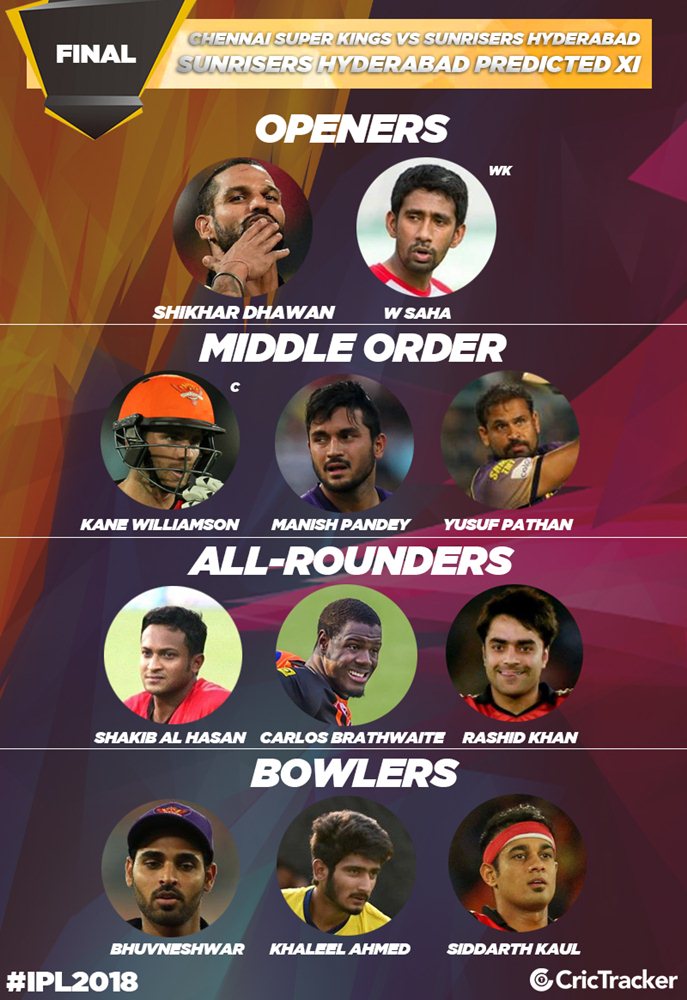