Who will qualify for the qualifier 2?

After securing their playoff spot in the final moments of the group round, the Rajasthan Royals are now set to pursue their campaign in IPL 11 against the Kolkata Knight Riders in the Eliminator at the Eden Gardens. Rajasthan had a pretty ordinary first half of the IPL and they were standing on the verge of elimination at one stage with just 6 points in 9 games.

But they gained momentum at the right time and won 4 out of their last 5 games to stretch their points’ tally to 14. While the qualification to the playoffs was still not confirmed, they eventually landed in top 4 with some of the other results going their way. KKR, like Rajasthan, are also coming into the playoffs with some positive momentum having won 3 games on the bounce and the fact that they are playing on their home turf as well will be an added advantage.

The new Eden Gardens pitch doesn’t offer that much of grip. It’s a true surface with good pace and carry. Also because the ground is not massive, a lot of balls fly over the ropes at this venue. But it’s still can’t be called a batting paradise. From bowlers’ point of view, there will be something to work with if they find the correct lengths and hit the surface hard. The batters who are not efficient at horizontal bat shots can be hurried with speed here.

KKR played Piyush Chawla for Shivam Mavi in Hyderabad as the pitch there was slightly abrasive and on the slower side, but it’s not the case at Eden where the pitch, if anything, will provide a little bit of assistance to the fast bowlers rather than spinners.

And KKR already has a couple of specialist spinners in their ranks in the form of Kuldeep Yadav and Sunil Narine. So they most likely will go back to Mavi and Chawla will have to warm the bench.

Rajasthan made the aggressive move of going with an extra bowler against RCB and it turned out to be a masterstroke as the strengthened bowling unit did the job for them with precision and successfully defended a 164-run total. They will probably stick with the same combination and will prefer Ben Laughlin over D’Arcy Short as the 4th overseas player.

However, it will be interesting to see if they use Jofra Archer at the top of the order as a pinch hitter. They did so the other day to add a bit of depth to their batting line-up and while it didn’t work, Jofra definitely is no mug with the bat and is capable of swinging the willow. So they might just go for it again.

Rajasthan are certainly a little weaker with the bat in the absence of Jos Buttler and Ben Stokes, but Heinrich Klaasen’s composure in the RCB game was a real positive for them. The South African’s crucial cameo of 32 in the death made a key difference and helped Rajasthan reach the par score. The onus will be on his shoulders again along with Krishnappa Gowtham to provide the visitors the power finish towards the end, while the likes of Ajinkya Rahane and Sanju Samson will have to set the base.

KKR’s batting possesses much more quality, but Rajasthan has good enough bowlers to nullify it. While Jofra Archer is effective both with the new nut and the old ball, they also have two classical leggies as the wicket-taking options in the middle overs. And to add to it, there are variations of Ben Laughlin and Jaydev Unadkat which make it a multi-dimensional attack.

The prediction is for the Rajasthan Royals to beat the Kolkata Knight Riders in this match. 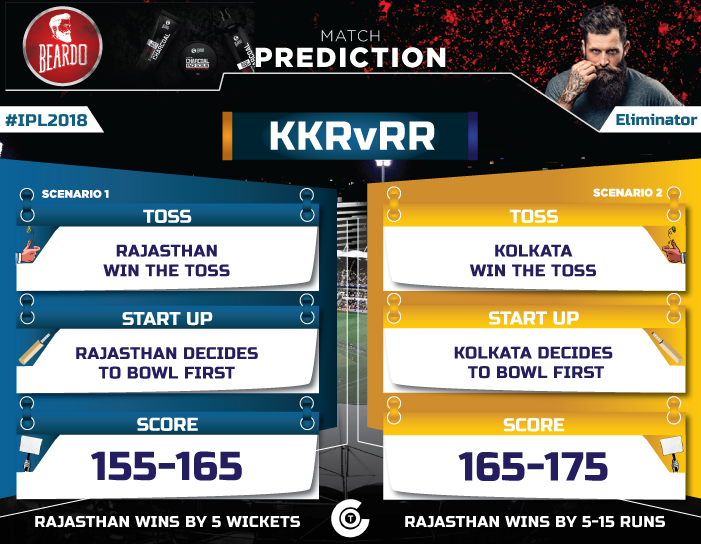