IPL 2018: Eliminator, KKR vs RR – Most Valuable and Liable Player of the game

IPL 2018: Eliminator, KKR vs RR – Most Valuable and Liable Player of the game

Rajasthan Royals went down against the Kolkata Knight Riders in the Eliminator by a 25-run margin at the Eden Gardens after being favourites at the halfway mark in the chase. The Royals sent back KKR’s top four for just 51 runs after electing to bowl first. However, Dinesh Karthik and Andre Russell helped the home team come back and post a stiff total of 169/7. An easy win was written on the cards for the Royals who needed only 83 runs in the last 10 overs with nine wickets in hand before they bottled their chances.

Russell was the game changer for the Kolkata Knight Riders scoring a crucial 25-ball 49 with three fours and five sixes. His innings was vital in helping his side finish with a total big enough to defend after the recovery. The West Indian was the Most Valuable Player of the match as per the CricTracker’s Player Value Algorithm as his blitz was valued at 57.5 lakhs. Stuart Binny was the Liable Player of the game failing to make any contributions to the scorecard and bagged a 3-ball duck at a crucial stage. 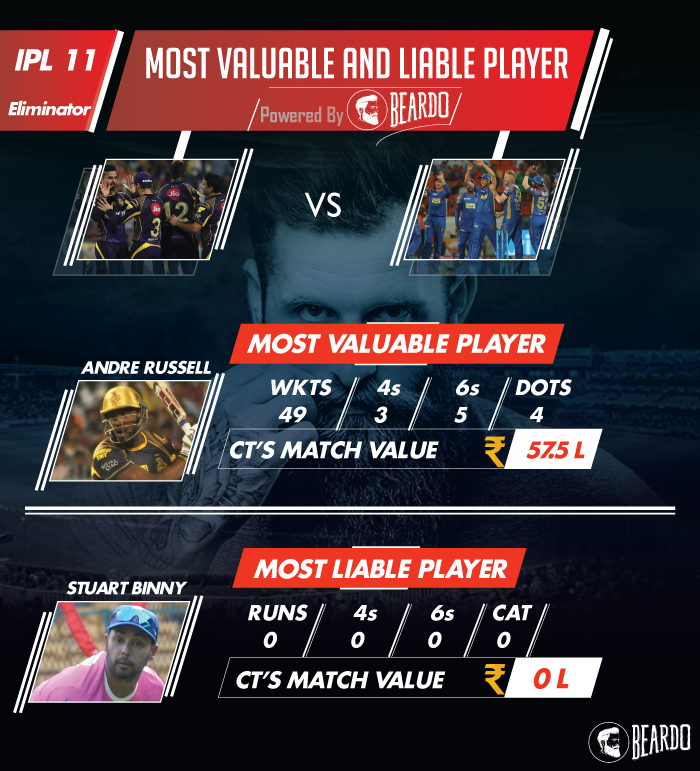 Dinesh Karthik‘s knock was in no way lesser to Russell’s inning as the KKR skipper’s contribution was extremely important in rescuing them after they lost three wickets for just 24 runs. Karthik scored 52 off 38 balls sharing a 55-run stand for the 5th wicket with Shubman Gill in just 6.2 overs. His performances in this game were valued at 56 lakhs as per the CT’s algorithm. Robin Uthappa and Nitish Rana turned out to be disappointments for the home side scoring just three runs. 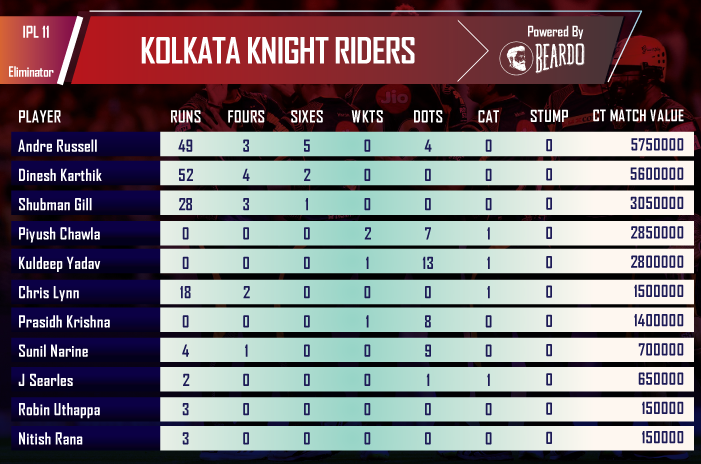 Sanju Samson and Ajinkya Rahane were the players with the highest value from this game. Samson scored 50 off 38 balls with four fours and two sixes before falling in the 17th over and so their chances in the game. Rahane scored a 41-ball 46 which infact killed the momentum of the chase which was supposed to be a cake-walk for the Royals at the half-way stage. Prasidh Krishna was impressive once again at the death overs conceding only 28 runs in his four overs which earned him a match value of 14 lakhs. 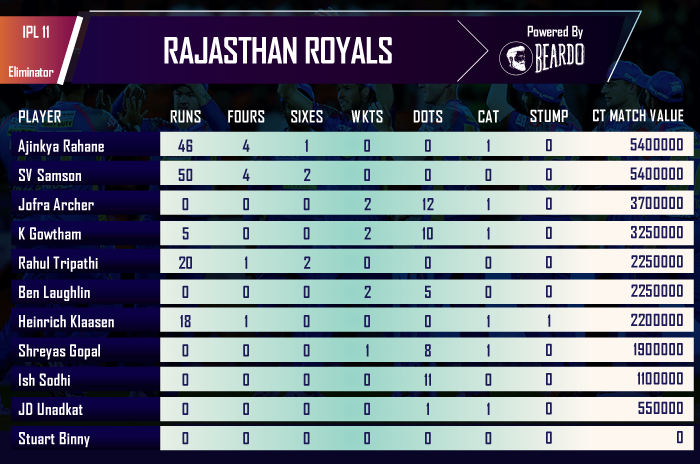