Will MS Dhoni make any changes to the winning combination in the mega-finale?

The final showdown is here. The eleventh edition will see the Chennai Super Kings (CSK) and the Sunrisers Hyderabad (CSK) clash for one last time for the ultimate glory. It will be worthy of a contest given that both the teams were at the top of the points table and have been consistent throughout the season. The Men in Yellow have made a dream come back to the fray of the Indian Premier League (IPL) and will play in their seventh final. However, they will also be confident of trumping the SRH for the fourth time this year.

All the three matches between these two sides have been keenly contested this season and CSK have managed to come out on top every time. But it is the game when everything will be at stake and by no means, they would like to take the Orange Army lightly. The way they fought back in the game against the KKR was absolutely and have the momentum on their side as well.

Here we bring you the predicted XI of CSK for the title clash:

Shane Watson bagged a five-ball duck in the first qualifier and was constantly troubled by Bhuvneshwar Kumar with the new ball. He will have to find an alternative to face the moving ball somehow before thinking of playing his shots in the powerplay. He has made a huge impact at the top of the order this season for CSK and his contribution will be needed for them to get going. Watson has so far amassed 438 runs in 14 outings at a strike-rate of 145.03 but his form has faded away in the last few matches.

Faf du Plessis is a champion cricketer. He had played only four matches until the first qualifier and looked completely out of sorts. He was also criticised for occupying Rayudu’s place at the top of the order. But the South African skipper proved his worth when the chips were completely down. He held the fort in the nervy chase for CSK and went on to play a heroic knock of 67 runs and fittingly hit the winning six as well. He is expected to do the same again and give a decent start to his team.

Suresh Raina has been the part of the Yellow brigade ever since its inception and has played in all the finals. No wonder he is used to such high-pressure games. But he will have to come out all guns blazing this time around after looking a touch uncomfortable in all the matches he has batted. He started well by hitting a few boundaries in the last encounter but was castled down the leg-side in the anticipation of the short ball. Raina needs to put the fear of the bouncers aside and play an aggressive brand of cricket in the most important game of the tournament.

Ambati Rayudu has raked in a lot of runs this season and is riding high on confidence. His first-ball duck in the last game was only a blip and will be itching to hit the straps. He has adapted to the different match situations perfectly after being shuffled in the batting order so often. Rayudu has complained much and has put his hand up everytime for CSK and will be a key player at number 4 for them.

MS Dhoni has had a few quiet games with the bat coming into the final. He will have to figure out on how to play the wily Rashid Khan who has set the stage on fire. The skipper was completely bamboozled by the googly in the previous encounter. He is the veteran though and is the master in coming out on top in the finals. His captaincy has always come to the fore in these situations and it will be once again tested on Sunday in front of a jam-packed crowd.

Dwayne Bravo was at his best in the first qualifier and got the wickets of Yusuf Pathan and Shakib Al Hasan at a crucial stage. He conceded only 25 runs in his four-over spell and shrugged off all the doubts about his diminishing abilities to bowl at the death. The champion will be once again tipped to do the job and might be required to hit some important runs while batting down the order as well.

Ravindra Jadeja has only improved with his left-arm spin as the season has progressed. He has been in the zone in the last few games and it seems that the wily spinner has found his line and length. Jaddu was very difficult to get away at the Wankhede against the same side and will have a more important role in the title clash. His batting has gone downhill though and has only managed to muster 89 runs in 10 innings this season. The team management will be hoping that he will not be required with the bat in this crunch game.

Deepak Chahar is one of the biggest positives for the Men in Yellow. Dhoni has loved to use all his four overs with the new ball and has more often than not provided an early breakthrough. He was injured midway through the season and missed a few games. But then came back strongly and bowled even better than he was doing earlier. Pressure will be on him while playing in his first final of the IPL and a lot is expected of him after bagging 10 wickets in 11 matches so far. He has surprised everyone with his batting as well and can tonk the ball a fair way if required.

Harbhajan Singh was strangely never introduced into the attack in the first qualifier at the same venue and his place in the side was questioned by many. He is an IPL veteran again and knows how to handle the pressure of the finals very well. He will definitely bowl in this match and play a key role for CSK. Shardul Thakur failed to land his yorkers in the last game and Carlos Brathwaite pounced on him. Dhoni would love to go back to his tactic of using his four overs before the death overs.

Lungi Ngidi has been a revelation. He burst into the international arena against India in the Test series and impressed everyone. He was snapped up by CSK in the auction for his base price of Rs 50 Lakhs and the decision has worked wonders for them. The fast bowler has been running in and bowling at a sheer pace to hurry the batsman and his role in the final will be immensely crucial.

Here’s the predicted XI of CSK against SRH: 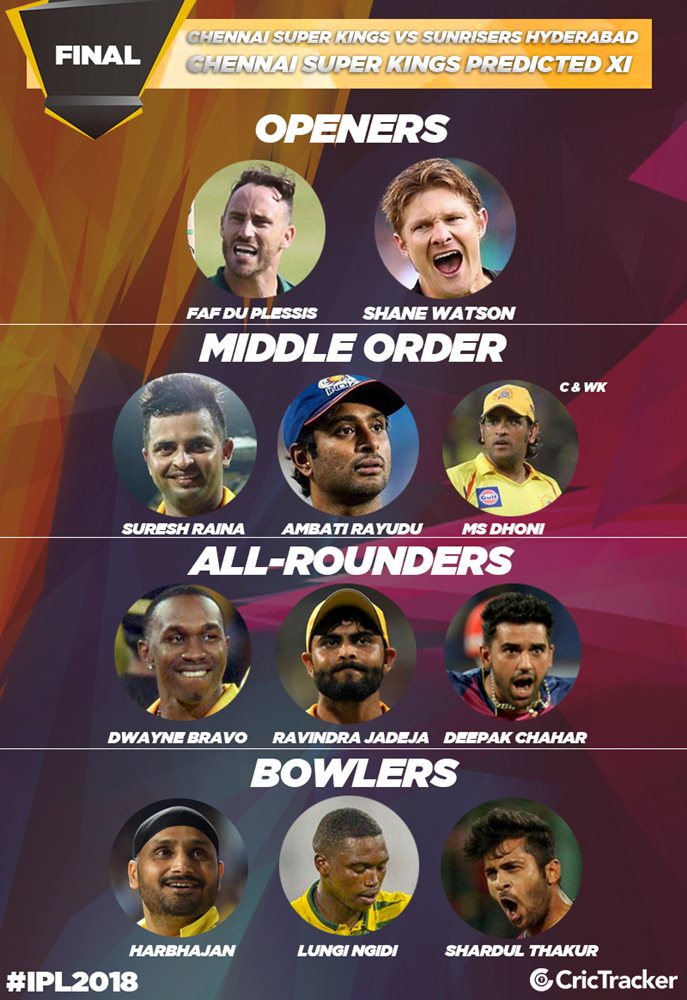