Every strategy implemented by the Sunrisers flopped as CSK turned out to be unstoppable on the day.

The Sunrisers Hyderabad (SRH) came into the Grand Finale at the Wankhede Stadium in Mumbai on the back of three consecutive defeats versus the Chennai Super Kings (CSK). Moreover, it was the same venue where they had served the Qualifier 1 on a platter to the same opposition. Kane Williamson made as many as three changes in their lineup the last time and they didn’t flounder.

This time around, they went and made a couple of changes to bring back Shreevats Goswami and Sandeep Sharma at the expense of Wriddhiman Saha and Khaleel Ahmed. The odds were well and truly stacked against the Sunrisers, but they had momentum in their favour. However, CSK didn’t have that privilege as they took the field after a gap of five long days.

The SRH skipper perished cheaply in the last match versus the Kolkata Knight Riders (KKR), which was also one of his rarest of rare failures. The Orange Army had to admit that barring Rashid Khan’s blitz, in the end, the Sunrisers wouldn’t have been able to pull off the heist. However, the team was aware of its dependence on the Kiwi cricketer.

Goswami was dismissed in the seventh over and the onus was on Williamson to guide the team. He played out a maiden from Lungi Ngidi, but the quite over was hardly going to affect the cool-headed customer. He opened his account with a streaky six over long leg. Nonetheless, it kick-started his innings and ever since, he strolled along.

In the eleventh over, he creamed Dwayne Bravo for three risk-free boundaries. SRH looked settled to rack up a massive score. But against the run of play, Karn Sharma, who replaced Harbhajan Singh enticed him into playing an ‘uncharacteristic’ rash stroke. The Black Cap stomped down the wicket but was beaten by the run and MS Dhoni took the bails off in a flash.

Shane Watson’s knock started in a similar way as that of Williamson as he played a maiden from Bhuvneshwar Kumar who hit immaculate channels in his opening over of CSK’s run-chase. He went on to play four more dot deliveries and was yet to open his account after 10 balls. In the next 23 balls, he notched 51 runs and made up for the slow start. He didn’t let the pressure unnerve him that paid dividends.

Watson’s scoring rate accelerated at an alarming rate as the Queenslander haemorrhaged 52 runs from the subsequent 18 balls, which took the sting out of Sunrisers’ bowling. Even Rashid Khan couldn’t cease the leakage of runs. The required rate was 10 with 12 overs remaining and after 30 balls, it was down to less than seven courtesy of the onslaught by Watto.

His run-churning spree was also helped by the fact that Rashid Khan’s venom was smothered. The Afghanistan tweaker bowled a maiden and nine dot balls, but couldn’t eke out a wicket. Bhuvi lent him support with 16 dot deliveries and a spell of 4-1-17-0. Meanwhile, there wasn’t any semblance of assistance for the duo from the other end as Watson and Co. kept piling on the agony and stormed to their third title. 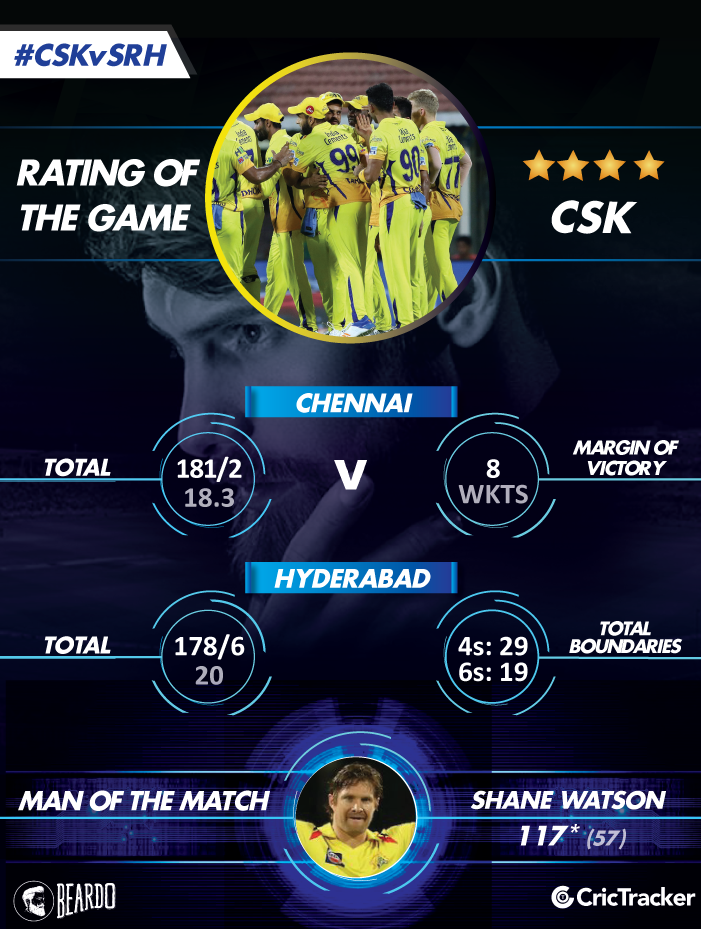