Dwayne Bravo’s exploits helped CSK to pull off an unimaginable win in the opening game of the edition.

One couldn’t expect a better start to the 11th edition of the IPL as Chennai Super Kings thumped Mumbai Indians in the opening game by 1-wicket. Dwayne Bravo’s exploits helped CSK to pull off an unimaginable win as they were needing 47 runs in the last three overs with two wickets in hand. Bravo scored 20 runs apiece in consecutive overs bowled by Mitchell McClenaghan and Jasprit Bumrah before getting out. Kedar Jadhav, who was retired hurt, returned to crease to finish off the game for CSK.

It was a no-brainer that Bravo was the most valuable player in the game and to add to his 30-ball 68, the Windies all-rounder gave away only 25 runs in his four overs earlier in Mumbai Indians’ innings. According to CricTracker’s player value algorithm, Bravo gains a whopping Rs. 81 lakhs for his performances from this game. Considering 14 games per season, Bravo earns 45.7 lakhs per every game. The 34-year-old valued 1.77 times his match salary. The Mumbai Indians’ all-rounder Kieron Pollard couldn’t make any contribution to the game as he was valued at Rs. 0. 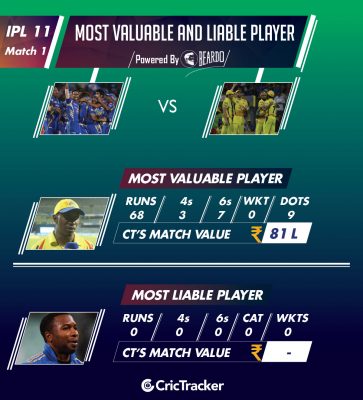 Four of the top five valued players in this game are from Mumbai Indians who earn over 40 lakhs as per CT’s algorithm. Hardik Pandya’s three wickets and 22 runs in the game were valued at 59 lakhs. His elder brother Krunal Pandya and the local lad Surya Kumar Yadav were valued at 46.5 lakhs and 48 lakhs respectively. The young wicketkeeper Ishan Kishan levelled his match salary as he was bought for a huge price of 6.2 crores.

Mayank Markande returned with the figures of 3/25 in his four overs that included the wickets of Ambati Rayudu, MS Dhoni and Deepak Chahar. He was bought for just 20 lakhs but his performances in the first game itself were valued at 35.5 lakhs. His match value as per CT’s algorithm multiplies his average match salary by 24 times. Deepak Chahar was valued 2.8 times his average match salary as he conceded 14 runs in three overs he bowled and bagged the wicket of Evin Lewis. 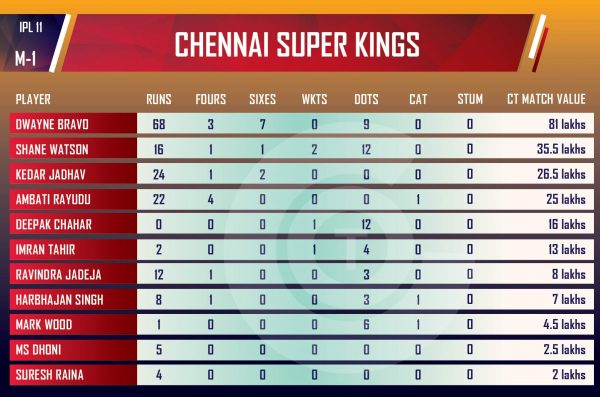 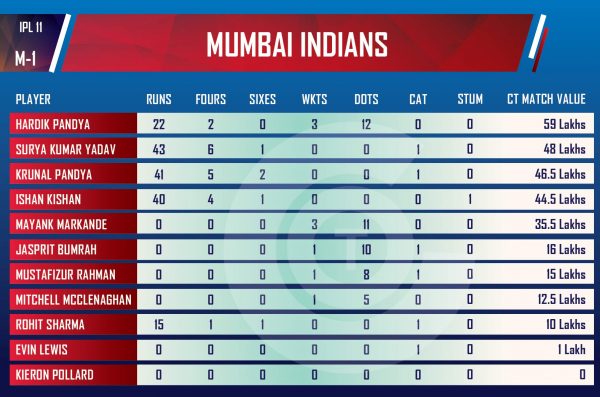