Sanju Samson blasted the Challengers at the M.Chinnaswamy Stadium.

At the half-way mark, Royal Challengers Bangalore needed to pull off the highest successful run chase of the season to win this game. The USP of the lineup can be segregated into two halves- the top four (de Kock, McCullum, Kohli and de Villiers) and the rest. Surprisingly, when the fourth wicket of AB de Villiers fell, RCB were ahead of the Royals at that stage of the game, but the scalp eventually brought the curtains down on the game.

Rajasthan Royals would be satisfied or rather be relieved to start with for the fact that D’Arcy Short couldn’t accomplish the dubious distinction of accomplishing a hat-trick of run-outs after the ones in the couple of games against the Sunrisers Hyderabad and the Delhi Daredevils. However, that was the solitary moment of joy for the Aussie as he strained for 17 balls at a strike-rate of 64.70.

Apart from the struggle, Rajasthan looked comprehensive as they scored 206 runs off 103 balls at a staggering strike-rate of 200 and resultantly, the Challengers went ‘red’ in their Go ‘Green’-initiated contest, which takes place every year at the M.Chinnaswamy Stadium in Bangalore. However, there was one man who stood out amidst the carnage- Sanju Samson.

Sanju Samson can’t be classified among the intimidating figures of Andre Russell, Chris Gayle or an AB de Villiers. But the numbers are all that matters in the game of cricket, not the intimidation, and Samson was a glaring example of the same. Does he possess the ferocity of a batsman who can muscle 10 sixes in an innings of 45 balls? No, he doesn’t, but he achieved the same.

The hallmark of a quality batsman can be seen from the way he/she constructs a knock. Samson nailed the same and hardly looked flustered. The Royals plundered 88 runs in the last 5 overs, out of which the wicket-keeper batsman scored 58 off 17 balls. Meanwhile, he cleared the ropes without dropping a sweat. His first 37 balls fetched 53 runs and the last 8 balls leaked 39 runs.

Cricket has always been more about ‘performance on the field’ rather than names, the squad of the Rajasthan Royals is the prime example. During RCBs run chase, the Royals had the audacity to open the bowling with Krishnappa Gowtham, an unknown figure even in India’s domestic circuit. Brendon McCullum smacked him over the covers to start proceedings.

In the fourth ball, the ‘unknown’ man drew first blood as Baz was sent packing courtesy of a well-judged catch by Ben Stokes. The second ball of the eleventh over and the third ball of the thirteenth over sealed the fate of the game. In a space of 13 balls, RCB slumped from a position of strength to a state of hopelessness.

Shreyas Gopal, another ‘lesser-known’ cricketer, pinned the colossus figures of Virat Kohli and AB de Villiers, which killed the game then and there. Washington Sundar and Mandeep Singh strained every muscle, entertained the crowd, but the required rate kept mounting at the rate of knots, which gradually went out of the radar of the Challengers. 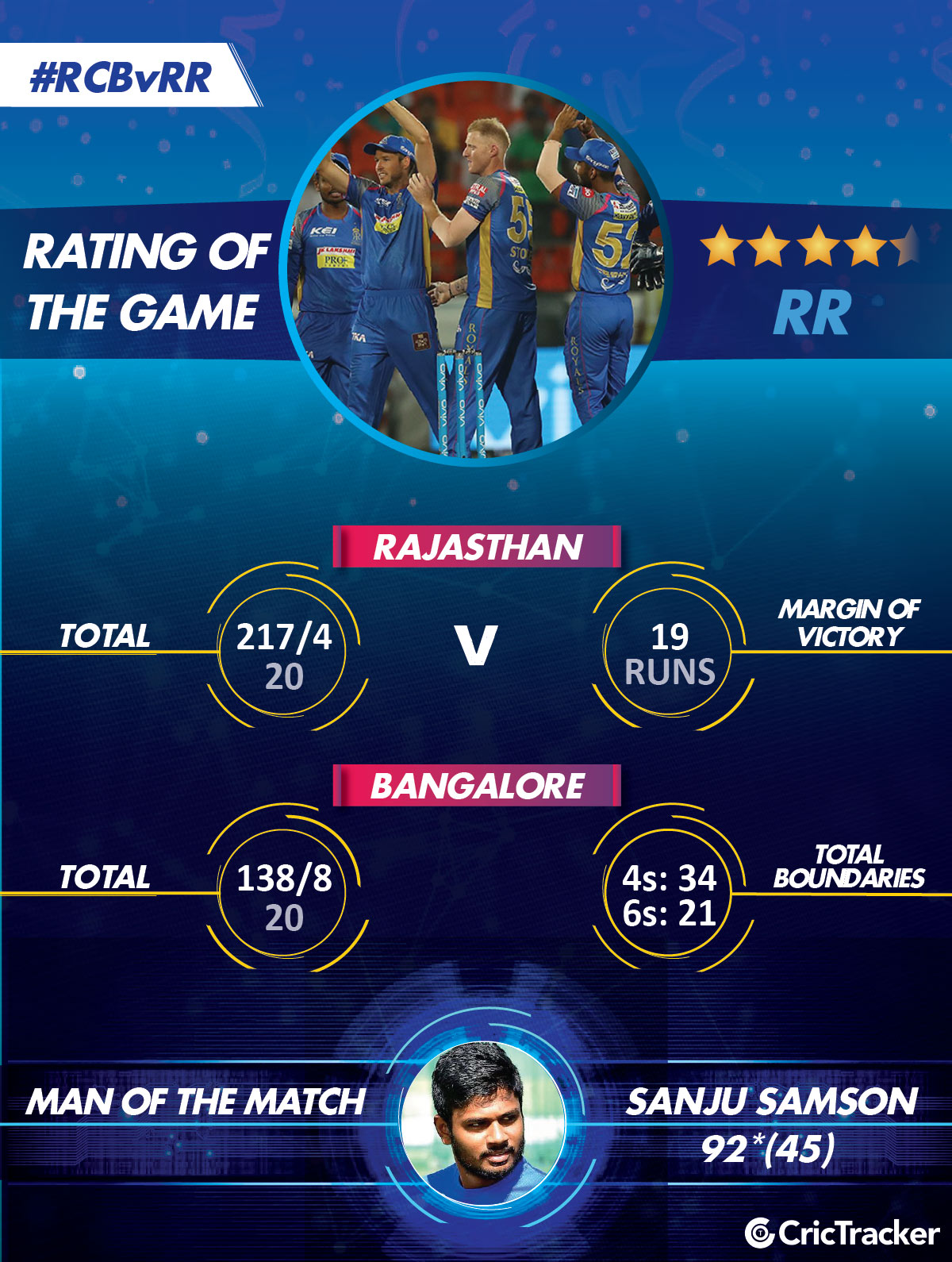