CSK will be playing without Raina for the first time in the history of IPL.

Chennai Super Kings (CSK) will face the challenge from Kings XI Punjab (KXIP) in the 12th match of the Indian Premier League (IPL) on Sunday. The Men in Yellow have been all sorts of problems ever since they have marked their comeback in the tournament. While hamstring tear to Kedar Jadhav in the opening game was not enough, Suresh Raina sustained calf injury in the very next match. Moreover, their home matches were shifted out of Chennai due to Cauvery Row in the State.

The squad is now also without Lungi Ngidi now as he had to leave them with immediate effect following the demise of his father back home. Though the team has managed to overcome all the difficulties and will look to continue their winning run against KXIP in their own den. It won’t be easy for them as the home side is coming off a defeat at the hands of Royal Challengers Bangalore (RCB) and even they will be itching to win this encounter.

Here we bring you the predicted XI of CSK for the game:

Murali Vijay will have to open once he comes in the playing XI and he will play in place of Suresh Raina who has been ruled out of the team for next two games. It is important for Vijay to play well straight away as the team lacks their key player in the line-up. He has been there before and has played some of the memorable innings for the team in his previous stints with the franchise. Something similar is expected of Vijay in this game.

Shane Watson has been in great form as he set the platform with a blazing knock in the tall chase of 204 runs in the last game. He is also contributing with the ball which has helped the cause of CSK in the early stages of the tournament. Watson’s all-round form would be huge for the Men in Yellow and even he would’ve realised the fact by now. The Australian will be itching to play a big knock for his team in the upcoming game.

Unfortunately, the circumstances have led for Ambati Rayudu to come down the order and take Raina’s place at number 3. Though he won’t mind this as originally he has been playing in the middle order for his old franchise and has a lot of experience. Even he has shown his prowess at the top of the order so far and would love to continue in the same vein.

MS Dhoni has gradually come up the order in this batting line-up and has occupied the most important position. He gets time to manoeuvre the ball and get his eye in and then smash the bowlers all around the park in the death overs. The time has come now to lead from the front with the bat as well in the absence of Raina and the cool man rarely disappoints.

Sam Billings is perfect for the team at 5 after his match-winning knock in their last game and he would love to play the same role throughout the season. The England cricketer is an excellent player of spin bowling which should bode well going forward in this tournament. For now, he will be looking at as a finisher and the Billings shouldn’t mind this tag as long as it is working.

Dwayne Bravo once again scored an all-important six in the last game once again to cap off his heroics against Mumbai Indians (MI). His bowling was pummeled by Andre Russell though but the team management wouldn’t be worried much by it as he is a champion bowler. Bravo has been coming down at 7 to bat but if he gets more deliveries he could be dangerous which he has proved already.

Ravindra Jadeja has played a brief role so far with both bat and ball for CSK and he will have to raise his game as an all-rounder soon. Slowly, he is regaining his mojo and more responsibility should bring the best out of the talented cricketer. He finished the last game from a delicate position and would be thinking of doing the same this time around.

Deepak Chahar is being looked at as only a new-ball bowler as Dhoni has a lot of bowling options up his sleeves. However, he could be used in the middle-overs as well and the youngster also needs to be kept in the game. Harbhajan Singh is a veteran and his off-spinners kept the batsmen quiet in the last game. Moreover, he is a genuine wicket-taker and it’s important that he takes the lead in this department and bowls well.

Imran Tahir too has fared decently so far but has to be consistent and tighter in his line and lengths to keep the batsmen at bay. Shardul Thakur played his first game against KKR and was a little bit expensive as he faced the hat of Russell. But he is a far better bowler and should play in this game as well. Thakur would love to pitch his knuckle balls and off-cutters properly on the day.

Here’s the CSK Predicted XI for the game against KXIP 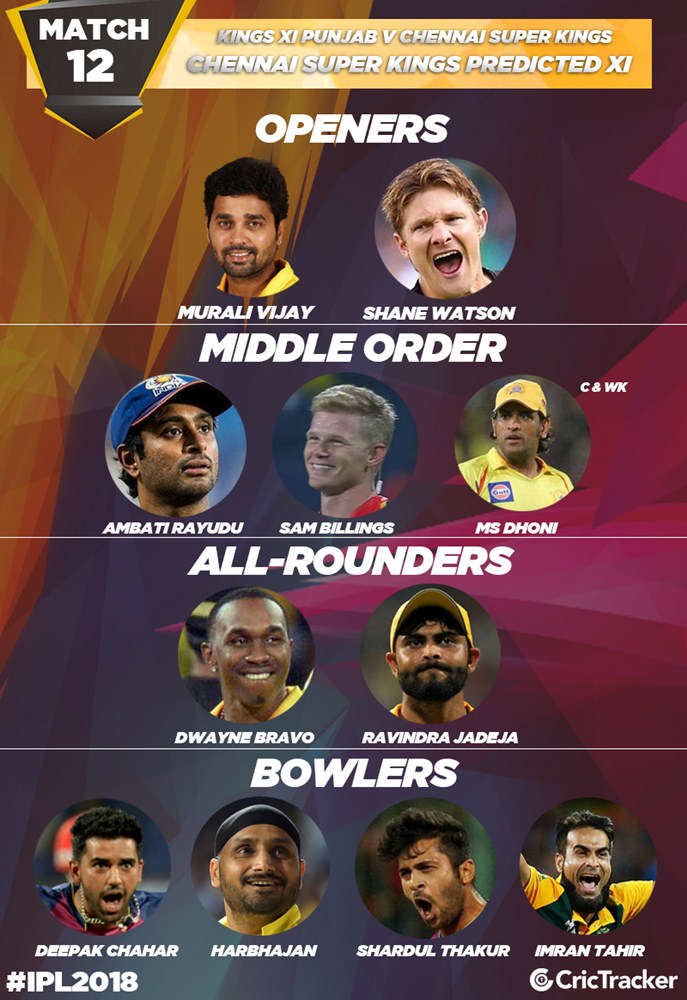