The Royals have won their last two matches this season.

The Rajasthan Royals have really managed to pull things back quickly this season. After a heavy defeat against the Sunrisers Hyderabad in their season opener, many wondered that they have got their permutations horribly wrong in the tournament. But the Ajinkya Rahane-led side has been formidable since then. They beat the Delhi Daredevils in their first home game and then crushed the Royal Challengers Bangalore in the away fixture.

However, they had lost two games that they played prior to the game against the Daredevils. The visiting side would be jittery and hence, the Rajasthan Royals should back themselves to overhaul them at home. And to do so, they will need to put their best combinations forward in the game.

The Rajasthan Royals are very much likely to tinker their opening combination. Rahul Tripathi has a very fair chance of opening the innings again. Tripathi opened with Ajinkya Rahane for the Rising Pune Supergiant last year and was very successful.

Also, three failures from D Arcy Short could mean his exit from the playing eleven. Short largely struggled against the spin bowlers in the previous game. Hence, Tripathi can make the cut ahead of him. Along with Tripathi, skipper Ajinkya Rahane looks like a set proposition in the top order. Rahane has been in a decent form in the tournament thus far.

The Royals middle order is in safe hands for sure. Sanju Samson looks to be in the form of his life. His unbeaten knock in the previous game had fetched him the Player of the Match in Bengaluru. The ease with which Samson is clearing the ropes is a big bonus for the Royals.

He will be accompanied by Jos Buttler in the department. Buttler has played a couple of handy cameos in the tournament already. But the Englishman is yet to come up with a big score this season. Also, he needs to keep his work with the gloves clean, after a horror show in Bengaluru.

With Rahul Tripathi moving in the top order, the RR camp will feel the need to accommodate someone in the middle order. And in all likelihood, South African cricketer Heinrich Klaasen could make his IPL debut. Klaasen can also take the wicketkeeping gloves if need be.

The all-rounders department has got a big bonus in the Rajasthan Royals camp. Windies all-rounder Jofra Archer has arrived and is in frame to make his IPL debut. Archer has had a very successful stint for the Hobart Hurricanes in the BBL this season.

Along with Archer, the big name of the Royals setup – Ben Stokes – is set to continue in his role in the middle order. Stokes could also be promoted in the batting order. With the ball, Stokes has failed to make an impact. He will be expected to come good for his team soon.

The spinners have come good for the Royals in the season. The Karnataka duo of K Gowtham and Shreyas Gopal have been very successful. Gowtham has the skills to bowl well in the powerplays too. Last game, he had bagged the big fish Brendon McCullum in the powerplay.

On the other hand, Gopal can trouble the batsmen with his variations and spin. Furthermore, both Gopal and Gowtham are more than just handy with the bat. They can use the long handle if and when needed and hence, are value additions to the team.

The pace bowling department will have the Indian experienced duo of Dhawal Kulkarni and Jaydev Unadkat. Both bowlers have had a decent season thus far. However, a breakthrough performance is what has eluded them this season.

They will be hoping to come good for their side in the matches to follow. Both these bowlers will have assistance from the likes of Stokes and Archer in the pace bowling department. The roles of the new ball bowlers will be a key factor in the game against the Knight Riders, considering the fact that they have an explosive top order.

Here’s RR Predicted XI for the game against KKR 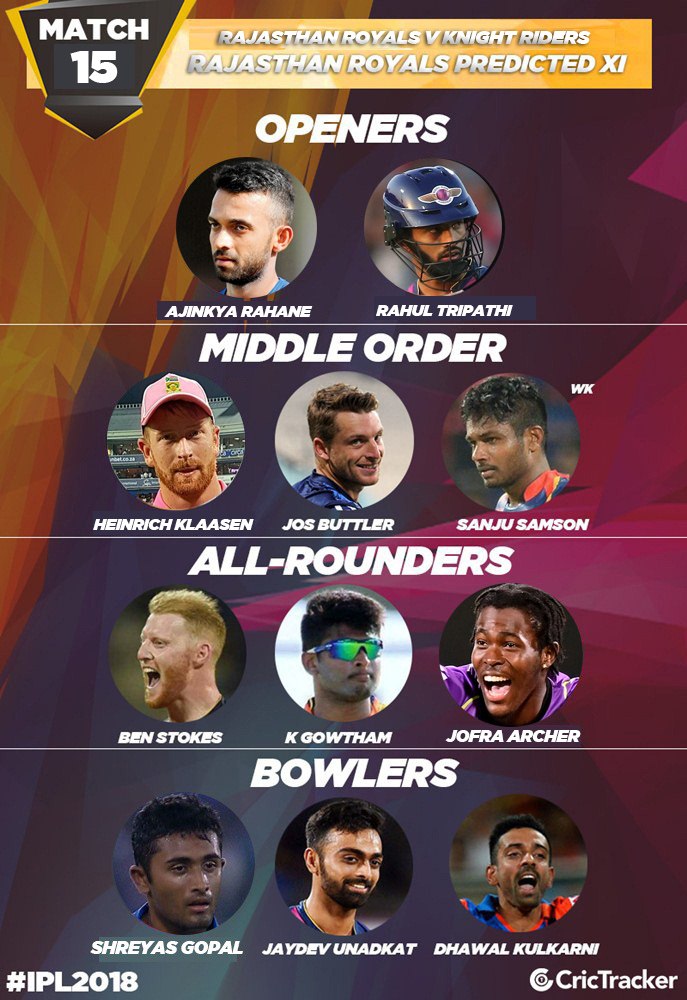