No player scored more runs against Bhuvneshwar Kumar in the IPL than Chris Gayle.

Ravichandran Ashwin proved himself unpredictable like his talks before the season by bringing Chris Gayle into the playing XI in the last game against CSK. While everyone expected Gayle to be picked in the game against RCB in Bangalore, Kings XI Punjab went against it and brought him in the next game. The move paid out for the KXIP as the legendary batsman scored a match-winning 33-ball 63 and provided a quick start to his team. The decision could also be in the view of Chennai Super Kings’ weak bowling attack.

KXIP will now face Sunrisers Hyderabad, who have got the best bowling attack and yet to concede a total of 150 in this tournament. Punjab might leave out Gayle given his struggles against quality bowling attacks. However, it won’t be an easy decision for the team management to drop a guy like Gayle after a sensational knock on team debut. Punjab have also struggled to score after their top order batsmen departed. The home team will hope their openers to have a longer stay at the crease with an inconsistent middle order following them. 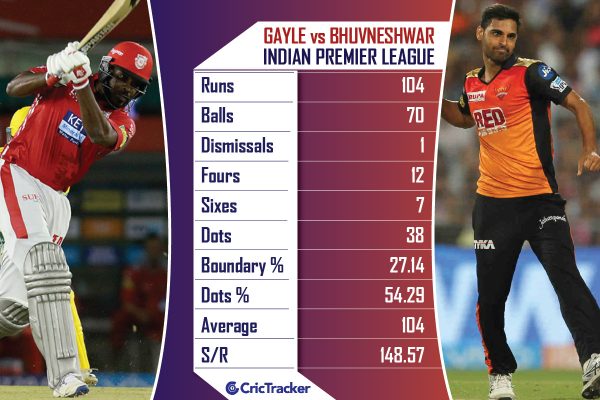 Despite a reputation of struggling against a moving ball and quality bowlers, Chris Gayle had a great record against Bhuvneshwar Kumar in the IPL so far. He got out to Bhuvneshwar only once in the IPL scoring 104 runs in 70 balls. Gayle managed to play out the threat of Bhuvneshwar on most occasions as he has a dot balls % of 54.29 against the SRH’s vice-captain. The battle between the two T20 stalwarts could end up deciding the result of the game.

Most runs by a batsman against Bhuvneshwar Kumar: 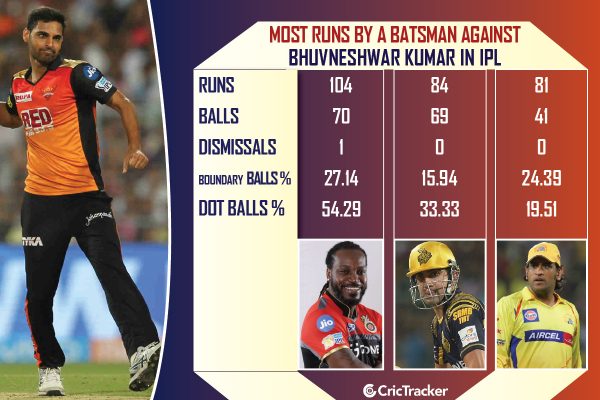 Chris Gayle is the only batsman to hit as many as 100 runs in the IPL against Bhuvneshwar Kumar. Gautam Gambhir and MS Dhoni scored 84 and 81 runs respectively against Bhuvi in the IPL without getting dismissed. The seven sixes Gayle hit against the SRH’s spearhead are also the most for any batsman in the IPL. Dhoni hit five off Bhuvneshwar in the league where no other player hit more than three sixes.