With the victory Chennai leapfrogged to the top of the ladder.

Not everyone gets a second chance in life. Some lucky people do, but the third chance never comes and that’s when there’s regret and dejection surrounding not pouncing on the first couple of opportunities engulfs a person.

The comparison of the game between the Chennai Super Kings (CSK) and the Rajasthan Royals (RR) was pretty similar to yesterday’s contest between the Kings XI Punjab (KXIP) and the Sunrisers Hyderabad (SRH). Both games had fate etched to it.

Both incidents panned out in the first innings of the game. And on both occasions, the teams of the cricketers, who were favoured by luck, ran away with the game. Wriddhiman Saha dropped Chris Gayle and he smacked the maiden century of the eleventh season of the Indian Premier League (IPL).

Today, Rahul Tripathi dropped Shane Watson, not once, but twice and Watson made them pay with the second century in the tournament in as many days. It was criminal, letting go a batsman, especially on the pitch which had peanuts to offer for the bowlers.

Ahead of the tournament, Watson was not deemed to be a force, he used to be even a couple of years ago. Maybe that’s the reason why he wasn’t retained by the Royal Challengers Bangalore (RCB). It came as a blessing in disguise for the Queenslander as the burden of pressure, most importantly expectations weren’t there for him.

After the ton, he seemed tired, which is forgivable, bearing in mind the age of one of the most destructive all-rounders to have played the game. However, by then, Watto already wreaked havoc on the bowling lineup. Meanwhile, Ajinkya Rahane’s decision to chase down the target severely backfired.

Where did Shreyas Gopal come from?

A pitch with a tinge of grass signifies a batsman’s paradise and occasional help for the fast bowlers. But the wicket at the MCA Stadium wasn’t a promising one for the spinners. On such a deck, Shreyas Gopal weaved his magic amidst the belligerence of Watson & Co. Not even a single time did he look flustered by the harsh treatment, the other bowlers were served.

To the credit of the leg-spinner, he dismissed the likes of Sam Billings as well as MS Dhoni, who previously played a couple of herculean knocks for the franchise. The result- CSK never got the finishing kick. Bravo chipped in with 24 runs off 16 balls, which is a tad below par on a wicket, which aided shot making.

The game was psychologically in favour of the Super Kings following the first innings. The kind of score they managed to post. Chennai finished the formalities by bowling RR out with nine balls to spare. The cushion of the target and some edgy batting by the Royals ensured that the likes of Shardul Thakur and Deepak Chahar get back their rhythm before the business end of the T20 league. Most significantly, Chennai leapfrogged to the top of the ladder.

Rating of the Match- 3 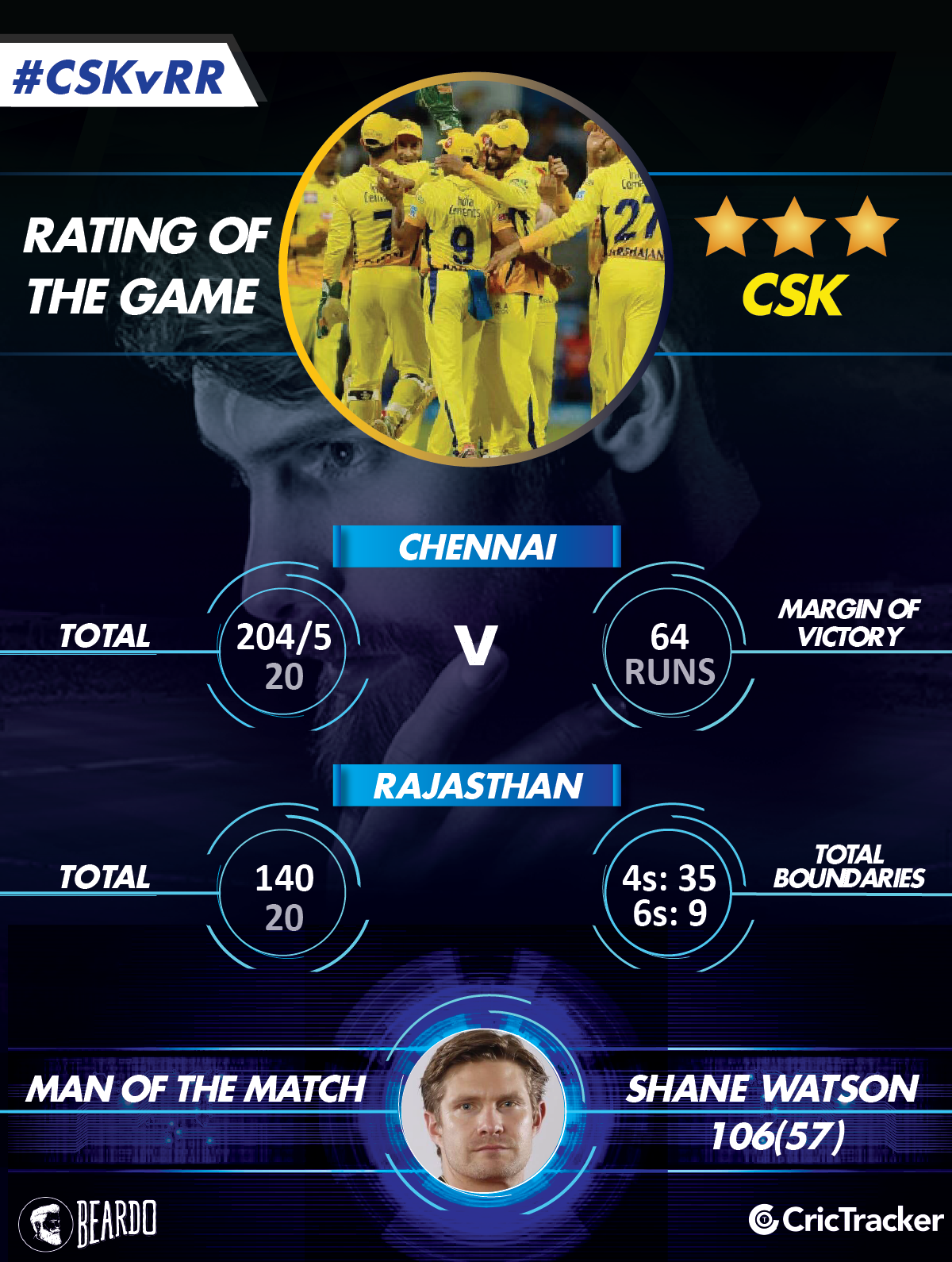