Ajinkya Rahane will be eager to change his record against Harbhajan Singh and Imran Tahir.

Ajinkya Rahane’s approach with the bat in the ongoing IPL edition has surprised everyone with some quick-fire innings in the powerplay for Rajasthan Royals. His season began with a 13-ball 13 against SRH and 40-ball 45 against DD but took over RCB and KKR spinners scoring a 20-ball 36 and a 19-ball 36 in consecutive games. Rahane is often known for anchoring the innings and even building pressure at the other end with his one-dimensional batting in the T20 format. Currently, he is striking at a rate of 141.30 in the current edition of IPL which is well ahead of his batting S/R in any previous IPL season.

The change in Rahane’s batting could well be a reflection of the struggles at the other end. His opening partner D’Arcy Short has failed to live up to the expectations and struggled against spinners. The RR skipper took the charge by dispatching the spinners over the fence. In the previous game, Rahane took on Sunil Narine by hitting the off-spinner for four consecutive boundaries in an over. Coming into the game, Narine dismissed Rahane on three occasions in the IPL and gave runs nearly at run a ball.

After two defeats and two wins, Rajasthan will now face Chennai Super Kings in Pune. The likes of Imran Tahir and Harbhajan Singh are present in the CSK’s spin attack who could make the life tough for the visiting team’s overseas players. While Short failed to get going against spinners, Ben Stokes was troubled by the wrist spinners. Jos Buttler, better in playing the spinners on ability, is yet to make a mark in the T20 format on Indian soil. 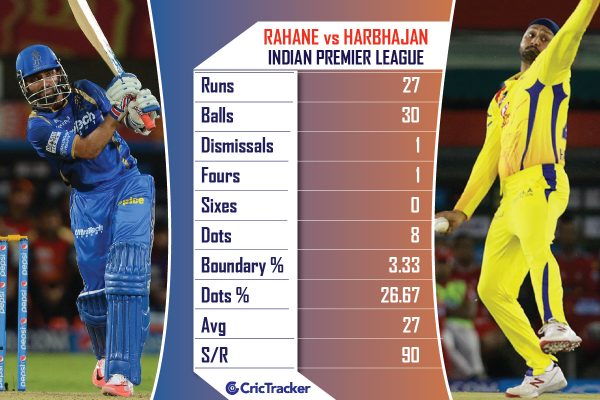 Rajasthan will expect Ajinkya Rahane to continue his new approach and last longer than 20 balls along with another key Indian Sanju Samson. The RR skipper collectively scored 42 runs against the veteran spinners and got out twice to them in 50 balls. Rahane need to turnaround his past record like in the previous match which will help his team to succeed with the bat. 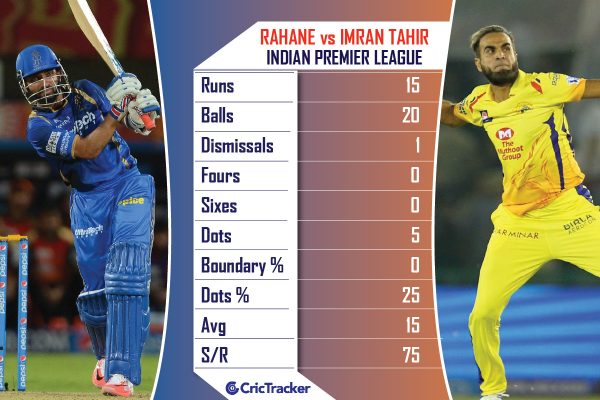