The teams would be itching to make amends after their thumping defeats in their earlier game.

Both Royal Challengers Bangalore (RCB) and the Delhi Daredevils (DD) have strained thus far in the tournament. The teams are at the bottom of the table and would be looking to resurrect their derailed campaign as the league heads into the business end. The team combination has been a major concern for the Royal Challengers with every passing game.

Though their batting has performed but the bowlers have struggled to stem the run flow, which has created additional pressure on the batsman. Going into their fourth game against Delhi, the Challengers would want to get things on track, else their journey could be in danger of going further into the slump. In our article, we take a look at their eleven that might take part at the M. Chinnaswamy Stadium in Bangalore.

Quinton de Kock has played decently in the tournament and is likely to be persisted as the opener. He gave his wicket away in the opening game but has given some brisk start to the team. In a rusty-looking batting lineup, the role of the Proteas wicketkeeper-batsman would again be vital. Meanwhile, he also needs to ensure that the cameos are converted into substantial knocks.

Parthiv might get his maiden game of the league. The cricketer has previously played for Chennai Super Kings and Mumbai Indians (MI) for the most part of his career and helped his team take advantage of the fielding restrictions. The Indo-South African pair can be a deadly combination going ahead in the tournament.

Virat Kohli might get himself demoted to the number three slot, provided Parthiv takes the field. He strained in the first two games but has come back strong with a couple of knocks of substances. Meanwhile, he would be disappointed for not being able to convert them into match-winning scores. AB de Villiers, barring the games against the Kolkata Knight Riders and the Kings XI Punjab, has struggled as well.

In the last couple of matches, the Challengers required him to deliver, but he floundered and perished cheaply. The South African batsman has to step up and get the runs flowing at the earliest in order to take the team out of the slump. Mandeep Singh has looked solid in all the games and he will need to shoulder some responsibility as well.

Corey Anderson came in for Brendon McCullum and was expected to play an important role with both bat and ball. Though he picked up a couple of wickets, he was taken for quite a few runs. To make things worse, he succumbed to Krunal Pandya’s guile for a golden duck. However, he might one more opportunity, bearing in mind the impact he can make.

Washington Sundar has shown that he can be entrusted as a genuine all-rounder with his performance against the Rajasthan Royals. Chris Woakes has been a tad out of form and RCB need the English star to churn out some significant performance. Woakes is currently regarded as one of the most efficient all-rounders doing the rounds in world cricket.

Umesh Yadav has been the standout performer for the Royal Challengers with the leather. He has picked up wickets in clumps and has been able to push the oppositions on the back-foot. RCB has managed a solitary victory and a chunk of the credit goes to Umesh for the stupendous over which saw three batsmen perish, including the likes of Yuvraj Singh and Aaron Finch.

Also against the Mumbai Indians, he churned out the early wickets of Suryakumar Yadav and Ishan Kishan. Mohammed Siraj, who came in for Kulwant Khejroliya, turned out to be their most economical bowler against Mumbai. Meanwhile, Yuzvendra Chahal needs to strike form, being a prolific performer for RCB over the years.

Here’s RCB Predicted XI for the game against DD 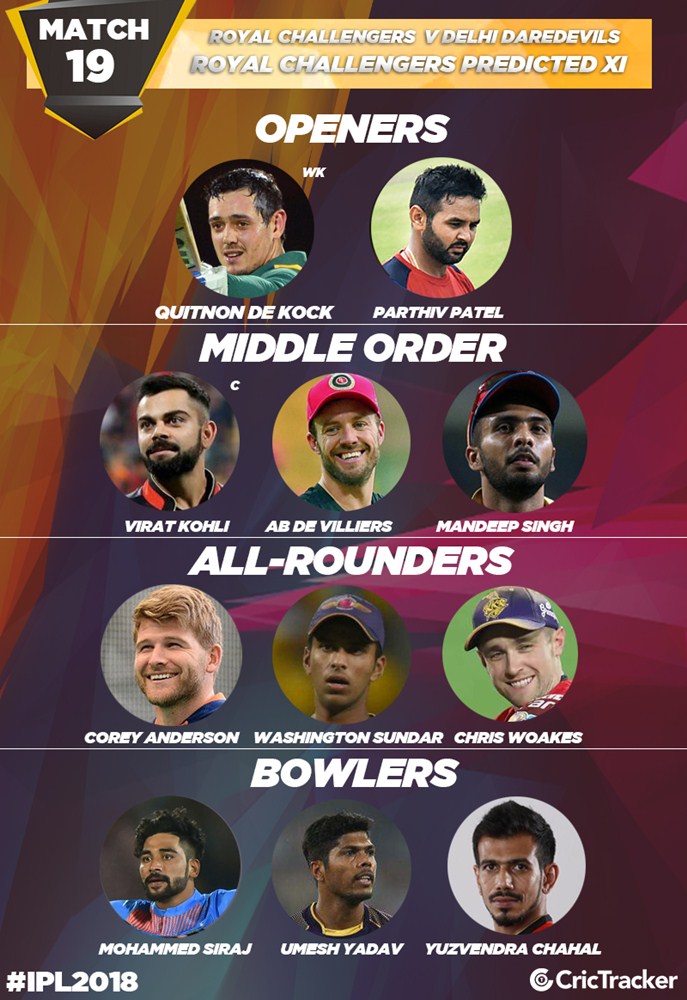