Sunrisers Hyderabad came on top in the game that was dominated by the bowlers.

The defending champions Mumbai Indians added one more defeat to their tally as they failed to chase down a mere 118-run total at the Wankhede against Sunrisers. A collective bowling effort from the home side saw them restricting SRH to just 118. However, as many as eight players getting out in the single digits saw MI getting bowled out only for 87 runs. Rashid Khan and Siddarth Kaul and didn’t let the Sunrisers Hyderabad feel the absence of their main bowlers Bhuvneshwar Kumar and Billy Stanlake by defending 118 on a sluggish track.

Siddarth Kaul took three wickets for 23 runs in his fours overs and put pressure on the home team with 13 dot balls. His match performances were valued at 74 lakhs according to the CricTracker’s player value algorithm that makes him the most valuable player of the game. The young leg-spinner Rashid Khan recorded figures of 2/11 in his four overs that included a maiden over. The man of the match earned a value of 44 lakhs from this game for his match-changing bowling performance. The Windies opener Evin Lewis turned out liable player of the game as he scored only five runs. 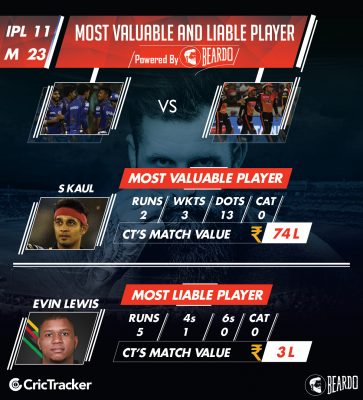 In this low scoring game, only four players managed to cross the 20-run mark. SRH skipper Kane Williamson and Yusuf Pathan top scored for their team with 29 runs apiece. They earned a value of 31.5 and 31 lakhs respectively from the game. Surya Kumar Yadav was the MVP of the game for the home team as he top scored for them with 34 runs that were valued at 43.5 lakhs. Hardik Pandya couldn’t finish the game with the bat but his bowling and fielding performances earned him a value of 34.75 lakhs. 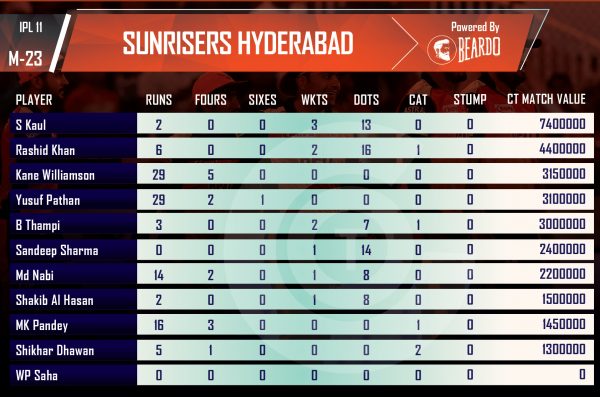 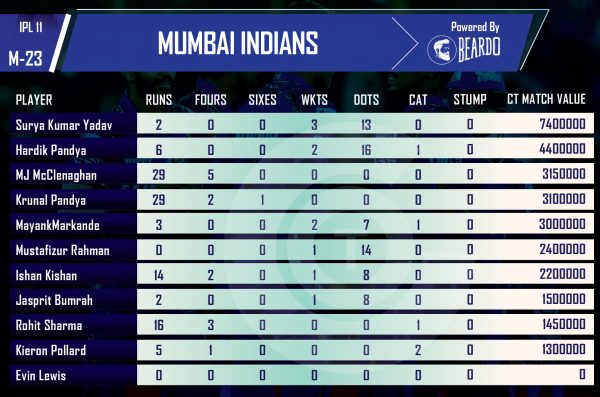