The in-form side will be targetting to upset the home crowd by trumping the star-studded RCB.

Chennai Super Kings (CSK) can do nothing wrong at the moment in the ongoing season of the Indian Premier League (IPL). It seems that their record of qualifying for playoffs every season will stay intact the way they are on a roll so far. With 4 wins after five matches, the Men in Yellow are in the top half of the points table ever since the tournament has commenced. However, they will face Royal Challengers Bangalore (RCB) at Chinnaswamy Stadium on Tuesday and have a tough task on their hands to trump the star-studded home side.

While every game is like an away game for CSK after the matches in Chennai were shifted to Pune last week, their on field performances have not dipped a bit. There have been a lot of injuries to their key players as well and there is still no clarity over Imran Tahir’s availability for the game. It is a clash of Titans in Bangalore and there is no doubt that it will be a high-scoring encounter given the superstars on show for the game.

Here we bring you the predicted XI of Chennai Super Kings against RCB:

Shane Watson will continue opening the innings for CSK following his recent heroics at the top of the order. His all-round contribution to the team has been immense so far and lends the stability to the line-up. Watto failed to cash on in the last game but his credibility is never doubted and will be key for his team against his previous franchise. With the ball too, he has fared decently and should continue to fill in a couple of overs for his skipper.

Faf du Plessis looked completely out of sorts in his first game of the season against Sunrisers. But he is too good a player to be dropped only after a solitary appearance. Also, MS Dhoni rates him very high and would want him to make an impact in the crucial game and take some pressure off his partner.

Chinna Thala of CSK Suresh Raina is back in form. He now has back to back scores of over 40 and is expected to continue playing the same way. He struggled for most parts of innings against SRH but didn’t throw his wicket away and managed to hit some lusty blows in the end. Raina’s presence in the middle means a lot to CSK and if he hits the purple patch, glory is not far away for them.

Ambati Rayudu has been the man of the crisis for this team. Dhoni showered huge praises for him after his match-winning knock. The man from Hyderabad looked in superb touch and has been in amazing form ever since the IPL has started. He has batted at every position at the top 4 and hasn’t disappointed at all. All his knocks have made a lasting impact on the results and the team will be hoping for him to continue in the same vein.

MS Dhoni dropped himself down once again to accomodate Du Plessis and most importantly looked his old self in the last match. He is regaining his old touch slowly and steadily as the skipper was able to smack the ball soon after coming to bat. Dhoni’s captaincy has been at par and nobody must be having doubts about it even in their wildest of dreams. The team is delivering for him and the man is happy leading the side with most of them ageing over 30.

Sam Billings shouldn’t be too much worried about his position for now. Though he didn’t get to bat, the England cricketer made his presence felt with his brilliant fielding at covers. He was absolutely magnificent on the field and one of those USPs for CSK who can turn the game on its head on any given day with his batting.

Dwayne Bravo was all over the park in the last match with his bowling but just about managed to win the game for his side. The brotherhood between him and Dhoni came to the fore, as the skipper was seen giving him some tips to him in the last over and eventually it worked for them. He will be given the same responsibility again and the Caribbean cricketer would be more than happy to do it.

Ravindra Jadeja finally bowled his full quota of overs and had a significant role to play in the team. He was deadly accurate as ever and conceded only 28 runs during his spell. It looks like he is coming to his best and his batting should also flourish as the tournament progresses.

Deepak Chahar was exceptional against Hyderabad and the youngster has only grown in confidence with every match. While many doubted about his ability to bowl four overs, his skipper has used him upfront with the new ball and he has delivered for him big time. He needs to bowl in the same way and now continue striking early for his team.

Karn Sharma has been decent so far in his couple of appearances in the yellow jersey. Amazingly, his acrobatics in the field when he leaped to save a certain six impressed everyone and bowled well before Kane Williamson tore him apart. It is important that he keeps his head high and be brave to toss up the ball again in order to get wickets. Shardul Thakur also won’t be dropped as Dhoni showed faith in him to come back strong. But he is blowing hot and cold too often and improvement should replicate in his performances.

Here’s CSK Predicted XI for the game against RCB 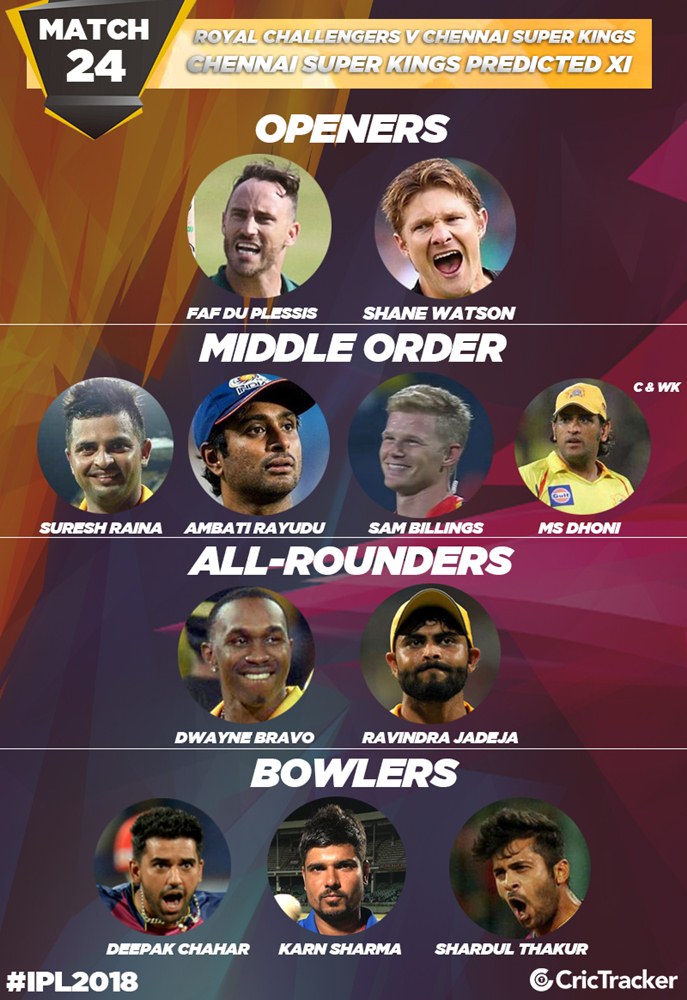