The Rajasthan Royals have been hot and cold this IPL. While they have been outstanding in a few games, the opposition has stream-rolled over them in a few others.

The Sunrisers Hyderabad are running on some positive momentum in Indian Premier League (IPL) 11 right now as they have pulled off two remarkable wins in the last two games by defending below par totals against the Mumbai Indians and the Kings XI Punjab respectively. However, ahead of their next game against the Royals tomorrow, they will be aware of the fact that they need improvements in certain facets of their game.

The Rajasthan Royals have been hot and cold this IPL. While they have been outstanding in a few games, the opposition has stream-rolled over them in a few others. With a 50% win-loss record after 6 games, they currently occupy the 5th position in the points table and are left with a fair bit of work to do with regard to securing a playoff spot.

The Sawai Mansingh stadium pitch is generally a batting deck, but posting scores in excess of 200 here is not easy because of the big dimensions of the ground. The ball at times, as it gets a little soft and old, sticks into the surface at this venue and if that is the case tomorrow, the role of the spinners will be crucial in terms of how they control the batsmen in the middle phase. The par score should be round about 170, but the possibility of the dew arriving later means the team batting first will want extra 10-15 runs in their kitty.

Jofra Archer finally made his debut for Rajasthan the other evening against Mumbai and he made a significant impact straightaway with a 3-fer. It’s not just the 3 wickets he got, but the stage he got them at was extremely vital. He put extraordinary death bowling skills on display which seemed to have been missing from Rajasthan’s arsenal before that. The fact that he can swing the willow down the order means his inclusion not only strengthens the bowling department a fair bit, but also adds to the batting depth of Rajasthan.

Hyderabad might have successfully defended two back-to-back low scores, but they must realize that it won’t happen every game, especially when the pitch is good for batting. It’s high time they picked Alex Hales who despite being a quality player has been continuously warming the bench since the beginning of the tournament. The Englishman can play the power game at the top of the order and can fill the void created by the absence of the regular skipper David Warner.

With Shikhar Dhawan also looking a little tentative in the last few games, it’s likely that Hales will get a nod tomorrow and will replace Mohammed Nabi who couldn’t do much with either bat or ball in a couple of opportunities he got.

Rajasthan is an explosive batting unit on paper, but their big names with the bat haven’t fired on a consistent basis so far, Jos Buttler in particular. The wicket-keeper batsman is one of the finest modern day finishers but is out of nick at this stage. Heinrich Klaasen as well has not felt at home on the slow Indian pitches and has registered two low scores to his name in two games. Ben Stokes and Ajinkya Rahane have looked alright form-wise, but they have thrown away their starts which is worrisome.

Talking about Hyderabad, their batting is a bit one-dimensional. They lack power and the X-factor. Apart from Yusuf Pathan, most of the players they have in the middle and the lower middle order are touch players and can’s really muscle the ball over the fence when it’s needed.

The visitors can, however, cover the shortcomings of their batting with their bowling which is incredibly strong. Their trump-card Rashid Khan has regained his touch after having a couple of bad games, while Shakib Al Hasan and Siddharth Kaul have been super consistent right through the tourney.

The prediction is for the Rajasthan Royals to beat the Sunrisers Hyderabad in this match. 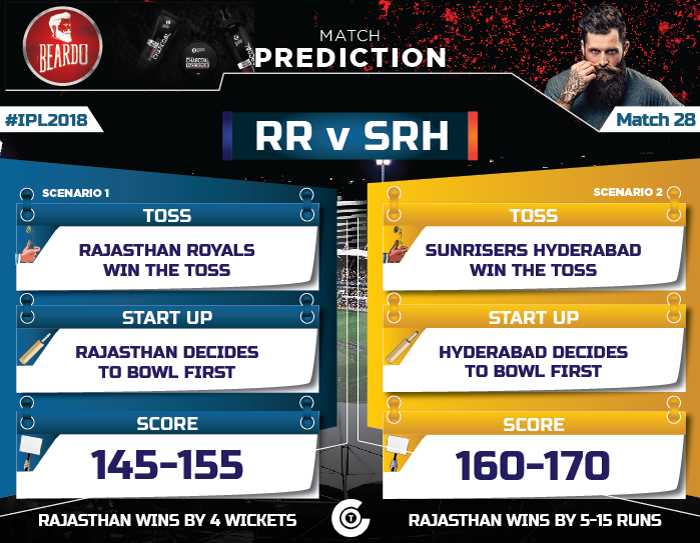