The match will be played in Jaipur.

The Rajasthan Royals had horribly lost their plot in the 2018 edition of the Indian Premier League. After a decent run in the first few games of the season, the Royals succumbed to a series of defeats. They finally got back to the winning ways with a win in their most recent encounter against the Mumbai Indians. It was a thrilling win for the Rajasthan Royals that would bolster their spirits big time.

Furthermore, the addition of players like Jofra Archer on the roster will keep their spirits high as well. The team has got a decent break after their win against the Mumbai Indians and are now ready for their next challenge in the season. The Royals will take on the Sunrisers Hyderabad in one of the matches of the double header on the coming Sunday. The match will be an important one with both sides looking in good shape ahead of the game.

The Sunrisers have won their previous two games of the season and look in supreme touch. The Royals will also take pride from their efforts in the game against the MI side. The last time these two sides met in the season, the Sunrisers had beaten Rajasthan Royals by 9 wickets. To beat SRH, the Royals will have to field their best possible eleven on the day.

The opening pair for the Rajasthan Royals has not fired in the season at all. They have tried quite a few combinations before settling down with Ajinkya Rahane and Rahul Tripathi in the top slot. Ajinkya Rahane has been in a good form and has constantly got starts this season. His intent in the powerplays has been great and that is a big positive for the Royals camp.

However, Rahane seems to have been getting no support from the other end. With Rahul Tripathi coming in the top slot yet again, the franchise would hope that Tripathi and Rahane will replicate their heroics of the Rising Pune Supergiant in the Royals’ outfit. Tripathi is a fine hitter of the cricket ball and the fans would love to see him play fearless cricket in the powerplay.

The middle-order remains a concern for the Rajasthan Royals in the season. Sanju Samson has been inconsistent in the recent fixtures. He had started off on a high this season and had also hammered a 90 odd against the Royal Challengers Bangalore. However, a couple of failures followed and that dented his confidence. He seems to have been back in form now and would hope to continue doing the good job for this side.

The English recruit, Jos Buttler, has been largely underperforming this season. Buttler has got the starts but is yet to play the big knock that the team wants from him. If he performs well in the role of the finisher, the team will look very dominating as a full competent unit.

The case of Heinrich Klaasen is pretty much similar to that of Jos Buttler. But in all likelihood, Klaasen is set to get another game in the season. He is a proven hitter of the cricket ball who is eager to leave an imprint in the IPL as well. Klaasen has failed to get going in the first two matches that he has played in the season and would be desperate to do well in the coming fixtures.

The all-rounders department seems to be the heavyweight for the team. They have Ben Stokes in their lineup. Stokes is the biggest name in the franchise and has been making a lot of buzz ever since the commencement of the season. However, Stokes has failed to live up to his name thus far. In the recent games, he has shown good signs of coming back to form with a couple of 40s to his name.

The lackluster form of Ben Stokes can be more than just compensated by the inclusion of Jofra Archer. Jofra Archer is fit and has already announced his arrival in the IPL in grand style. In the first game of the season, Archer returned with figures of 3/22 to his name and was awarded the Player of the Match award.

In addition to the overseas power houses, the team also has K Gowtham, who has turned in to an overnight star for the team. In the previous game against the Mumbai Indians, it was Gowtham’s unbeaten 33 off 11 balls that had sealed the fate of the game for his side. Also, Gowtham has been bowling very well in the powerplay.

Shreyas Gopal looks set in the spin bowling department for the Rajasthan Royals. He has been bowling decently this season and has managed to be a wicket taking option for his side. In the last couple of games, he has gone away for some runs but the management will have faith in him. He has held the role for the team in the past and has had decent success as well.

The fast bowling department has been quite erratic for the Rajasthan Royals. The Indian duo of Dhawal Kulkarni and Jaydev Unadkat look very experienced on paper but have largely failed to deliver in the season. While Dhawal has been struggling with inconsistency, Jaydev Unadkat has been all over the place.

In the recent times, though, both the veterans have managed to get back in good shape. In all likelihood, both the players are set to take the field again for the match. Both bowlers will get more support from the overseas duo of Ben Stokes and Jofra Archer in the fast bowling department.

Here’s RR Predicted XI for the game against SRH 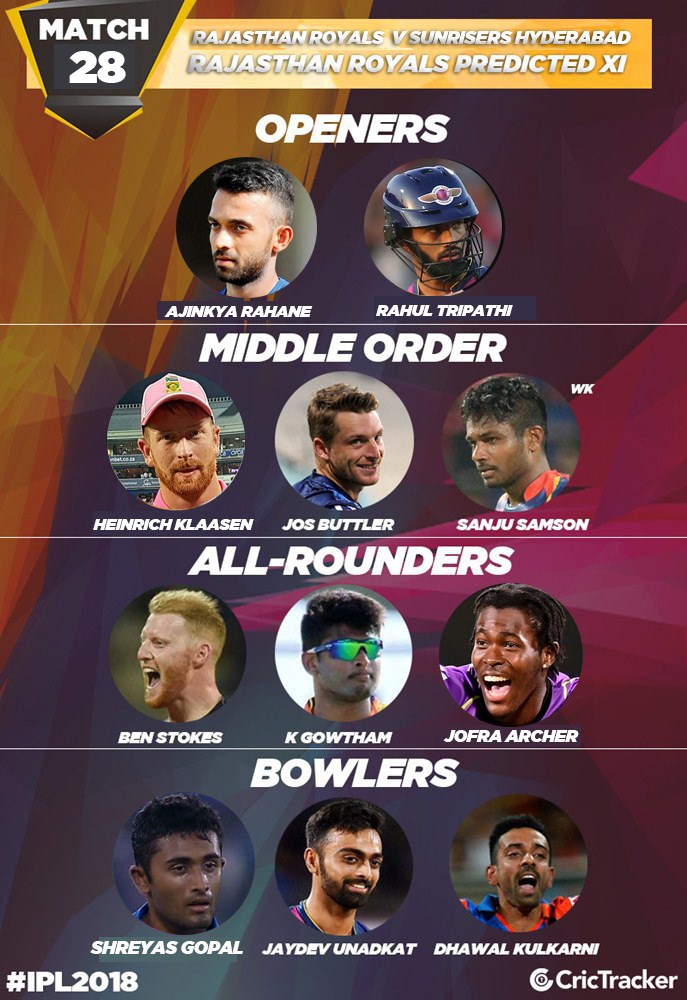