With this, SRH take the apex position in the points table and are certain to qualify for the playoffs with 6 games to play.

Rahul Tripathi learnt the hard way that catches win matches isn’t just a cliché quote. Jofra Archer started off well but Sunrisers Hyderabad (SRH) skipper Kane Williamson was put down for just 11 in his first over. Making most of the second life – he often drove the ball through covers – and it raced to the boundary, hit it over the head of that fielder – got a six, smashed the ball down the ground and hit it through the grass for boundaries and sixes almost alternatively. When the ball was on his pads he paddle scopped it beating the short fine leg fielder for another boundary. Amidst all that he also ticked the ball around on the onside for a quick couple when the fielder was well in the deep. Williamson didn’t even attempt to muscle the ball, rather stuck to his strengths and timed his shots to perfection.

He scored his 4th half century in the 2018 edition of the league and by the end of his innings completed 322 runs this season. The New Zealand skipper was eventually dismissed by compatriot Ish Sodhi who managed to get an under edge and Jos Buttler pocketed it. Alex Hales enjoyed his time in the middle as well, whenever the bowlers were too full or too short he cut, pulled and hooked it to the ropes on other occasions rotated the strike and let Williamson handle it. Archer hit another bullseye for his team with a three-wicket haul after the initial disappointment. He castled Shakib Al Hasan with a Yorker, Yusuf Pathan hit one straight to the third man fielder and Rashid Khan made an unsuccessful attempt to play a big shot and was holed in the deep. Ajinkya Rahane and Sanju Samson were the only two men who stood out for the Royals. The team had an undesirable start but they were determined to not let the fans down. It was only during their partnership that RR looked on course to chase the 152-run target that was otherwise mediocre but mountainous against Sunrisers.

Only about Rahane and Samson

Rahane played some beautiful shots, he is always a batsman easy on the eye, the opposition doesn’t really understand but he bleeds them dry. His five boundaries and a six ensured he was scoring at faster than run a ball. Samson who has been Mr Consistent for the Royals once again got a start. A 40 by his standards is just a start. He rotated the ball around, didn’t let the bowlers settle in while not taking a lot of risk. Samson wanted to stay there till the end and had he the result certainly would’ve been in favour of his team. Siddarth Kaul has been the unexpected assaulter in the team that has bigger heavyweights in the bowling attack. He forced the keeper-batsman to play a false shot and Alex Hales did the rest. Rahane didn’t find another partner after Samson’s dismissal and another crunchy performance from the SRH death bowlers ensured they had too much to get in the last over. Krishnappa Gowtham who was the star in Rajasthan’s successful chase of 168 against Mumbai couldn’t clear the field this time and gave Basil Thampi the joy of celebrating his only wicket in the match. The youngster had the luxury of 21 runs in the last over and he spent 11 less to win it for the team. With this, SRH take the apex position in the points table and are certain to qualify for the playoffs with 6 games to play. 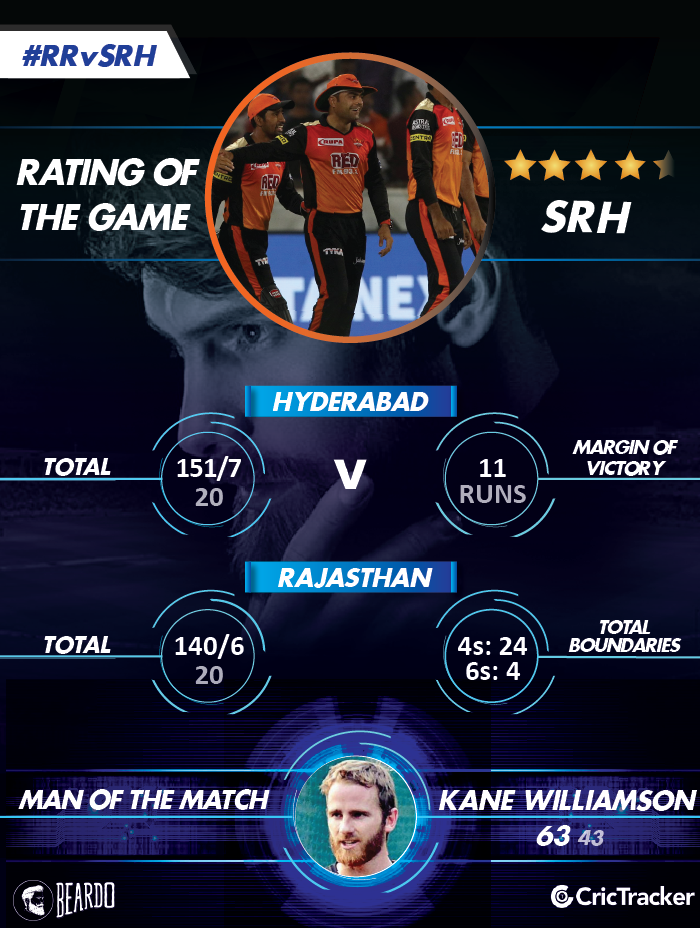