KKR bowled RCB out for 49 at the same venue last year.

Royal Challengers Bangalore (RCB) and the Kolkata Knight Riders (KKR) have had some riveting encounters over the years. Probably that’s the reason why they are neck and neck in terms of head to head. Quite expectantly, the upcoming contest at the iconic Eden Gardens in Kolkata between the rivals promises to serve exciting cricket.

The Knights have been encountered with some injury concerns. On the other hand, RCB were jolted by the injury of Nathan Courter Nile, however, they found a replacement in New Zealand all-rounder Corey Anderson. Meanwhile, going forward, we take you through the predicted eleven which might take charge for RCB in their opening game.

The left-hand and right-hand combination of Parthiv Patel and Brendon McCullum can rattle any oppositions. Both of them have previously opened in the tournament and has delivered the goods to their respective sides. Parthiv Patel is short in stature, however, the Gujarat-born cricketer packs a punch and shouldn’t be undermined by any means.

Brendon McCullum has pulverized oppositions at the top of the order with his fearless brand of cricket. Though he retired from international cricket long back, his hunger to notch runs hasn’t died down. The Challengers would be hoping for Baz to them off to a flier and clinch the ascendancy right from the outset against the Knights.

The responsibility of the middle order is most likely to be shouldered by the cricketers who were initially retained by the franchise. Virat Kohli and AB de Villiers have been fulcrums for the Challengers over the years and have been pivotal to several of their victories. Virat Kohli couldn’t perform as the skipper in RCB’s previous season and he would want to make amends.

De Villiers’ brutal ability to find the boundaries also needs to come to the fore in order for the Royal Challengers to rack challenging totals on the board. He will definitely be one of the hottest prospects in the tournament. They also have Sarfraz Khan whose retention raised many eyebrows. However, his prowess with the willow might just be the tonic RCB require propelling their score.

The franchise used the Right To Match (RTM) card on Pawan Negi and he might be drafted in being a handy lower order batsman and an efficient left-arm spinner. Provided RCB lose some wickets in quick succession, Negi have to bring forth his skills and guide his team to respectability. He was their highest wicket-taker last season and the franchise would dearly wish for him to replicate his form.

Chris Woakes made his IPL debut for the Kolkata Knight Riders and will be up against the same opposition in RCBs opening game. Coincidentally, he would be bowling for the same opposition against whom he picked three wickets to help KKR bowl them out for 49 runs. Meanwhile, RCB would be hoping for their overseas recruit to perform as per expectations.

The specialist bowling contingent will be led by the Indian bowlers in the form of Washington Sundar, Yuzvendra Chahal, and Umesh Yadav. Sundar has been exceptional for India in the shortest format of the game. Not only has he been able to stem the run-flow, but also managed to churn out wickets. Yuzvendra Chahal has been their gun bowler for the last few seasons and will be expected to perform.

Umesh Yadav has been an integral part of the Indian Test team. However, his ability to generate pace and bounce can turn out to be ominous from the oppositions’ point of view. Tim Southee has been in exceptional touch with the leather in New Zealand’s home Test series against England and he would wish to carry forward the touch for the Challengers in their first game. 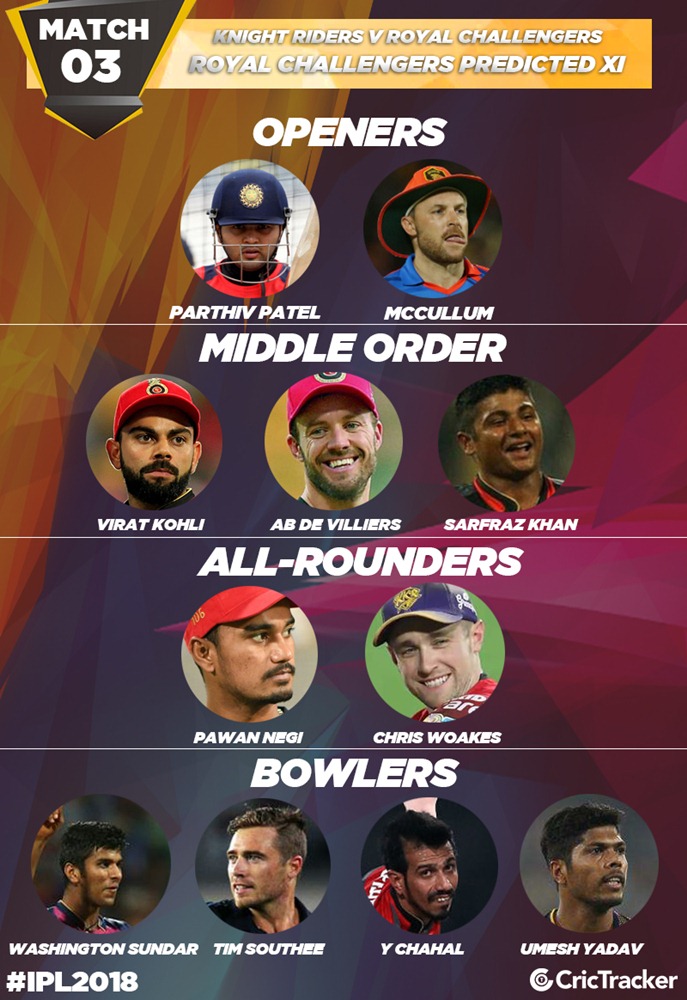 Stay updated on every ‘cricket news‘ and developments with CricTracker.com