Virat Kohli-led RCB will take on the Kolkata Knight Riders in their first game of the season.

Virat Kohli set become the only player to feature in all the IPL editions for a single team when he takes the field for Royal Challengers Bangalore on Sunday. However, he and the RCB franchise would be hoping that at least this season will be their season to put hands on the title. The RCB skipper will hold the key for his franchise as their most valuable player. He will be needed to score some big innings and make the things easy for his side.

Royal Challengers will be facing Kolkata Knight Riders in their opening game of the 11th edition at the Eden Gardens. RCB have some nightmare outings against the KKR in the IPL including the lowest total of 49 in the league came at the Eden Gardens last year. Virat Kohli will also hope to overcome his past debacles including his record against Sunil Narine. The off-spinner dismissed Kohli on three occasions in the league and scored at an S/R of 92.98. KKR will hope Narine overhauls his bowling action issues and claims the big wicket.

Virat Kohli vs Sunil Narine in the IPL: 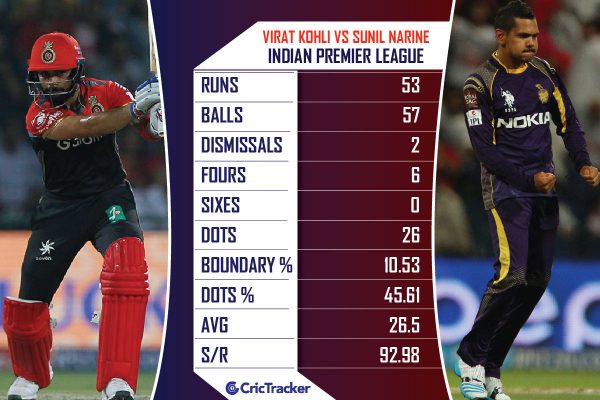 Chris Gayle is the only other player to score runs at a lower rate than Kohli against Narine in the IPL. The Windies opener turned out to be ineffective against his country made in the IPL. He scored 40 runs in 47 deliveries against Narine and got out trice. The MI skipper Rohit Sharma also managed to score at only 103.57 despite batting 84 balls. However, Rohit averages 43.5 against the KKR’s off-spinner.

Lowest S/R for any batsman against Sunil Narine in the IPL: 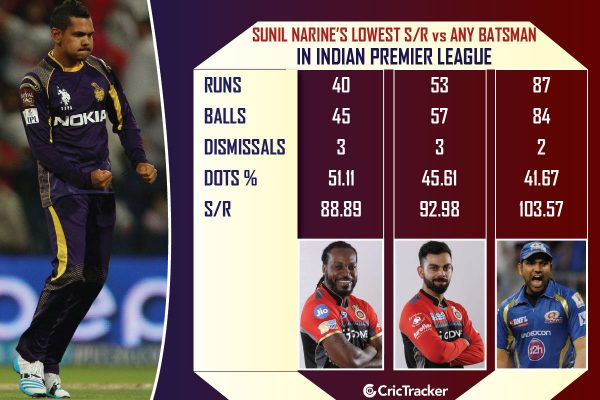 Narine is the only bowler in the IPL against whom Kohli scored over 30 runs at a strike-rate under 100. Kohli scored 31 runs in as many balls against Pragyan Ojha in the league. Kohli struggled to get going against the lanky pacer Morne Morkel as he got out three times in 62 balls to the South African. He scored only 66 runs against Morkel scoring at an S/R of 106.45.

Lowest S/R against any bowler for Virat Kohli in the IPL: 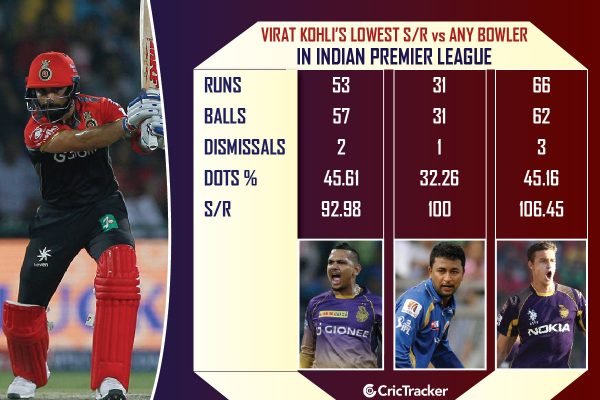