The Men in Yellow will be eager to seal their spot in the playoffs as soon as possible.

The table-toppers Chennai Super Kings (CSK) are set to clash against the Kolkata Knight Riders (KKR)  at the iconic Eden Gardens on Thursday. They have already won 6 out of 8 matches and one more victory would all but seal their place in the playoffs. On the other hand, KKR has often blown hot and cold so far with alternate wins and losses as they are seeking some consistency. The Men in Yellow had won the last over thriller by chasing down the score of 203 runs when these two teams met earlier this season.

Despite being plagued by injuries, they have managed to clinch back-to-back wins mostly through their batting line-up filled with champions. The bowling unit is still struggling and they would be wanting to address those issues in the upcoming matches. The injury to Deepak Chahar forced MS Dhoni to change the combination of the team completely and it worked wonders for the team.

Here we bring you the predicted XI of CSK for the game against KKR:

Faf du Plessis looked scratchy during his 33-run knock at the strike-rate of 100 against Delhi. But he made sure he stuck it out to play the second fiddle to his partner Shane Watson who was going bonkers on every delivery. He will continue to open in this match as well and would look to improve on his previous outing for sure. If Du Plessis at the top of the order, CSK will look a flawless side as far as their top 6 in the line-up are concerned.

The former Australian cricketer is repaying the faith shown in him by CSK during the auction. All the experience at the highest level is coming to the fore for Shane Watson. He has shrugged off the poor last season and has played some breathtaking knocks so far. He plays the pickup shots nonchalantly which are pleasing to the eyes and it seems he will continue in his purple patch for long now.

No one has any doubt about Suresh Raina‘s talent in the shortest format of the game. He endured a failure in the last match but is a gritty player and will look to make amends now. A match-winning knock is around the corner for the champion batsman as he is coming back to his best slowly but steadily. His fielding has been a top notch as usual and has saved a lot of run for CSK so far.

Ambati Rayudu has taken a liking to being a CSK player it seems. he is enjoying his role as a floater in the line-up. After batting at every position in the top 4, he looks set to continue in the middle-order if Faf du Plessis manages to nail down on the opening slot in the next few matches. Rayudu has looked sublime whenever he has batted this season and deserves the Orange Cap which he has bagged for being the highest run-getter.

MS Dhoni slammed his second fastest fifty in IPL in the game against DD. The veteran has been going through the best phase of his batsmanship in the last few years and is set to continue to bat in the same way. He instils fear in the minds of the bowler by his presence on the 22 yards and has once again owned the territory of the death overs.

Dwayne Bravo mainly needs to look after his death bowling after going for a lot of runs in the match against Delhi. Even the skipper Dhoni lost his cool at one stage on him after not bowling according to the field. CSK banks on him to come good in the death overs and the champion bowler needs to deliver every time. Even Ravindra Jadeja is being used as a bowler more according to the situation and hasn’t disappointed his captain this time. He castled Glenn Maxwell and broke the back of Daredevils’ insurmountable chase last week.

Karn Sharma wasn’t used at all to bowl while defending the huge total in Pune. There is no reason to drop whatsoever and should play this game as the lone wrist-spinner in the line-up. Harbhajan Singh hasn’t picked wickets but has contained runs to a large extent to increase the pressure from one end. Dhoni would be happy with the role he has played so far and would want him to continue doing the same.

KM Asif impressed everyone with his pace in his debut IPL game. He replaced Shardul Thakur in the team and most importantly took wickets up front. Though he needs to work on his bowling at the backend of the innings, he will only improve under the watchful eyes of Stephen Fleming. Lungi Ngidi also played his first IPL game and most probably sealed his position in the team for the remainder of the season. The pace which he offers with the ball was much-needed for CSK and Dhoni looked quite pleased with his performance.

Here’s CSK Predicted XI for the game against KKR 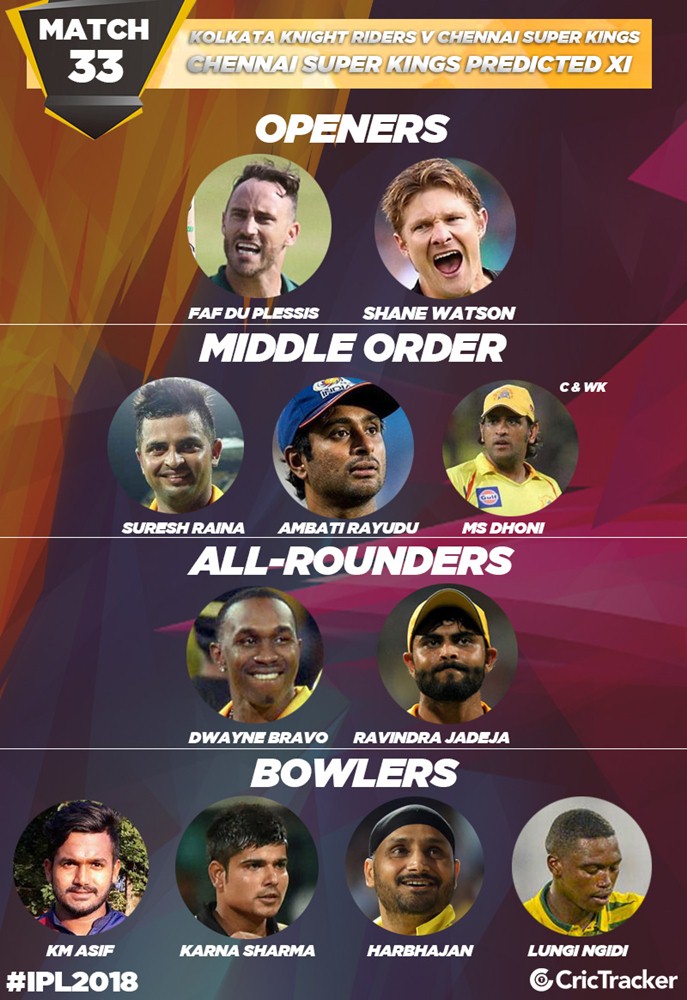