KKR beat CSK by 6 wickets in a crucial game.

Kolkata Knight Riders once again showed their strength while chasing totals at home as they registered a convincing 6-wicket win against the Chennai Super Kings. The Knight Riders’ spinners played a crucial part in restricting the visiting side to 177/5 after they were cruising at 90/1 at the halfway stage. The Under-19 star batsman Shubman Gill came to his team’s rescue after finally being promoted. He struck an unbeaten 57 batting along with his captain Dinesh Karthik as KKR chased down the target with 14 balls to spare.

Shubman Gill scored 57 off just 36 balls with seven fours and two sixes becoming the 4th youngest player to score a fifty in the IPL. He relished the opportunity while batting in the top order and shared an unbeaten 83-run stand for the 5th wicket with Karthik which took them over the line. Gill turned out to be the Most Valuable Player according to the CricTracker’s player value algorithm as his innings was valued at 62 lakhs. The youngster’s match value is equivalent to 4.82 times his average match salary as he was bought by KKR for 1.8 crores. 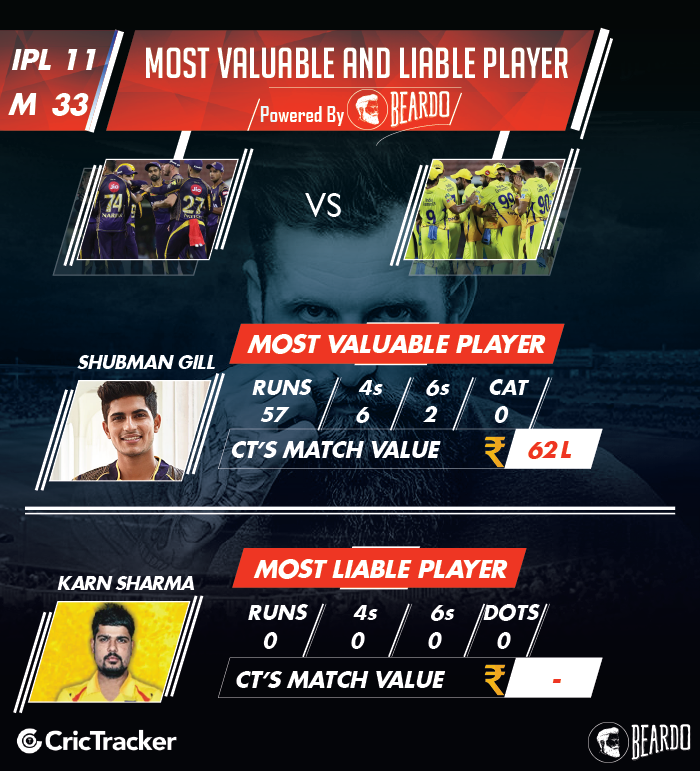 Karn Sharma turned out to be the liable player of the game as he didn’t get a chance to face a ball and ended up conceding 11 runs in the only over he bowled. All-rounder Andre Russell earned the lowest value among KKR players as his match contribution was restricted to only one over with the ball. Sunil Narine, the man of the match in this game, earned a value of 61 lakhs. The West Indian scored a quick 20-ball 32 after picking two crucial wickets for just 20 runs in his four overs. 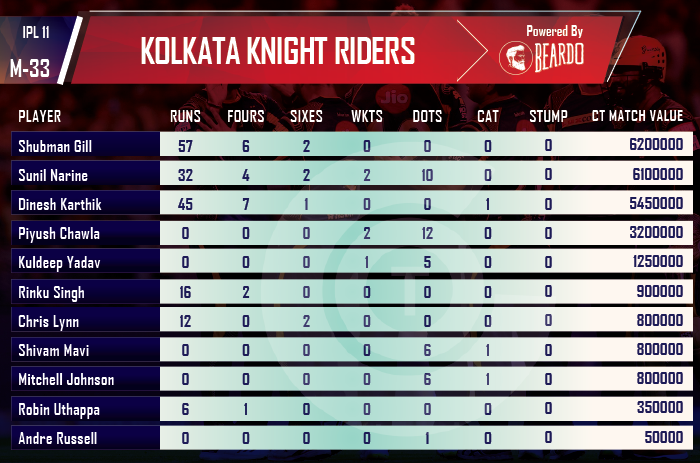 KM Asif was unlucky to finish with figures of 32/1 in the three overs he bowled. He dismissed Robin Uthappa early on but was taken for 21 runs in his 3rd over. The Kerala pacer earned a value of 21 lakhs from this match which is 7.35 times his average match salary as Super Kings bought him for only Rs 40 lakhs. Shane Watson was the Most Valuable Player for CSK having scored a 25-ball 36 at the top and decent efforts on the field later on during KKR’s innings. 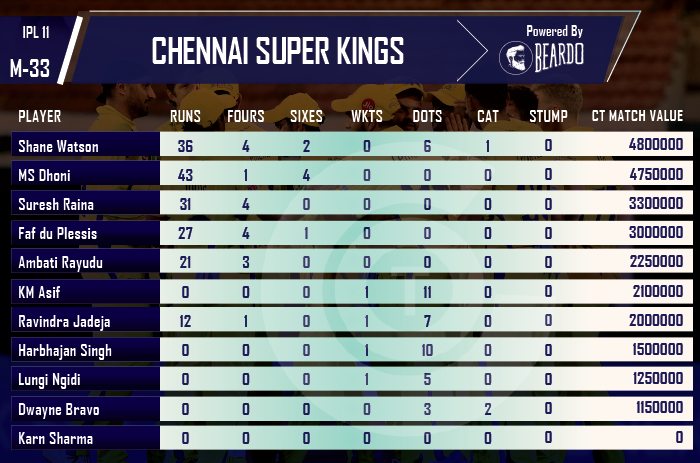