Mumbai has to win all their remaining games to stay in contention for the playoffs.

Mumbai Indians (MI) are going through tough times currently in the ongoing Indian Premier League (IPL) as they have lost 6 games already. It is imperative for them to win all their remaining matches and even a loss can shatter their hopes of defending the title. The refreshed and in-form Kings XI Punjab (KXIP) are their opponents this time who will also play their first home game in Indore. However, it is important for Rohit Sharma and his men to take one game at a time and try to make a come back.

It is all about momentum in the shortest format and a win in this game would surely put them back on the track. But for that to happen, Mumbai’s gun players have to fire. The skipper has failed to lead from the front this year even as the other retained players have also disappointed. The new recruits have also not done any justice to their potential which has affected the performance this year. Though the mood in the camp should be upbeat as they hope to turn around their season from now on.

Suryakumar Yadav is the only batsman who has been consistent this season for the Men in Blue this year. Unfortunately for him, the other players have been blowing hot and cold too often and his heroics at the top of the order are wasted most of the times. But he will have to continue playing crucial knocks by putting behind the disappointments if Mumbai has to win the upcoming matches.

Evin Lewis missed the last match due to injury but should be fit now and will replace Kieron Pollard in the team. The left-hander has not been consistent at all and needs to get going from the word go in this match. He exploits in the powerplay will help the team cover their middle overs trouble and hopefully, a refreshed Lewis comes to the fore against Punjab.

Rohit Sharma has to bat at number 3 no matter what the situation is. He has to find the form for his team to start winning. So far he has scored two half-centuries and both the times they have won the match which depicts that the line-up is dependent on him. JP Duminy played well in Bangalore and Mumbai needs a player like him in the middle order to arrest the collapse. He can cover it up later in the innings and is more dangerous at the death.

Aditya Tare might come into the XI in place of young Ishan Kishan who has struggled in the last few matches. A couple of golden ducks has not helped his cause and may need a break. Tare is fresh after not featuring this season so far and can accelerate the run-scoring at the backend of the innings. It will be a refreshing change to the line-up which can work wonders to the fortunes of the team.

Krunal Pandya will be gutted after failing to seal the game with his brother Hardik Pandya at Chinnaswamy Stadium. Both were set to launch an assault on the opposition but had no answer to some impeccable bowling from the home side. Though Hardik would be happy with his all-round performance as he took 3 wickets with the ball before scoring a valiant half-century in the chase.

Ben Cutting once again didn’t have much to do as he wasn’t used with the ball and came out to bat in the last over when the result was a foregone conclusion. Rohit needs to keep him in the mix to get the best out of the Australian and he might bowl in this game.

Mayank Markande has stood tall amidst all the losses his team has faced. The leggie has kept the batsman guessing as the teams are still struggling to pick his variations. It is important for him though to bowl in the same way and pick more wickets going forward in the tournament. Mitchell McClenaghan conceded a lot of runs in the final over in the last match which eventually proved to be game changing in the end. He needs to keep his emotions in check and deliver when it matters the most.

Jasprit Bumrah has come back in form but has been kept devoid of wickets as batsmen are concentrating on playing his spell out and attacking the other bowlers. He needs to find a way through their defences and a couple of wickets in every match from here might resurrect the season for the defending champions. 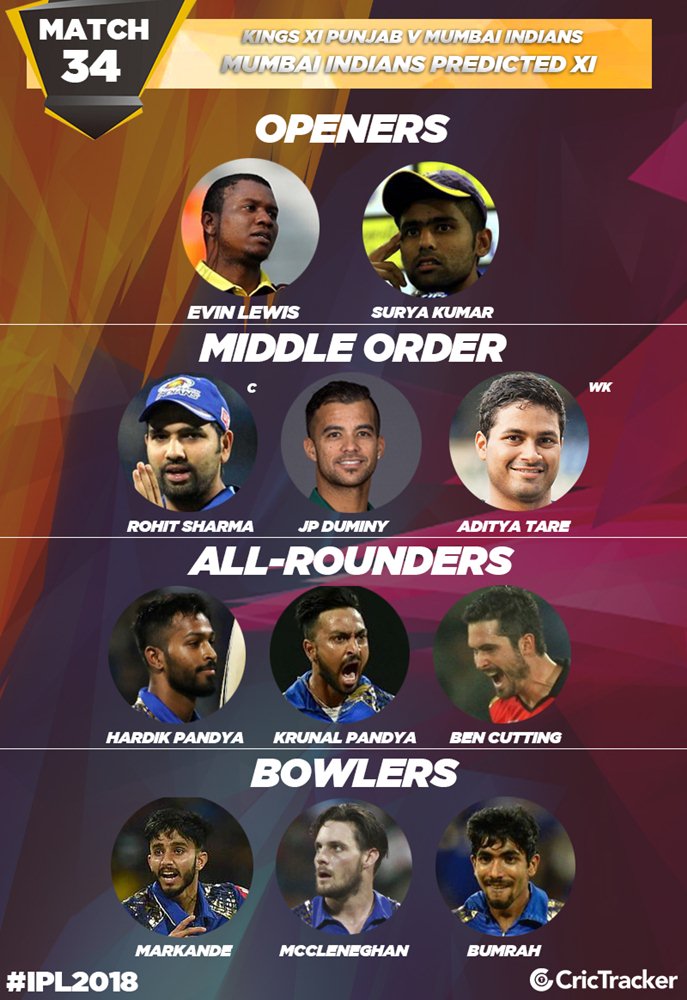