In the end, the chase was clinical for Mumbai who saved themselves from being eliminated.

Mumbai Indians (MI) found their groove in the tight chase finally as the duo of Krunal Pandya and Rohit Sharma slammed boundaries beautifully. The opener Suryakumar Yadav had set the platform earlier when it felt if they had botched the run-chase once again. But Kings XI Punjab (KXIP) were caught off guard in the end as the real assault was saved for the end. However, a special word should go for Jasprit Bumrah who bowled wonderfully well upfront and helped Mumbai in restricting their opponents.

Holkar Stadium in Indore is always a graveyard for the bowlers and the runs galore at the venue. But the way he bowled today was absolutely brilliant. There was a plan in place for Chris Gayle and KL Rahul as Mumbai opened with Mitchell McClenaghan and then the ball was handed over to Jasprit Bumrah. he was welcomed by Rahul with a six over cover as the ball sailed into the first tier. The next ball was a single which brought the Universe Boss on the strike.

All of the next four deliveries were different as the batsman couldn’t score off them. While the battle began with a yorker length delivery outside off. The next couple of balls were slower ones as Gayle failed to figure it out with the last ball finally edging only to fall short of the wicketkeeper and first slip. The over got Bumrah going as his second of the spell also went only for four runs despite bowling in the powerplay. It goes without saying that he was held behind then for the death overs.

Bumrah came back to bowl in the 17th over and unfurled all the variations from his repertoire. While the slower ones were tough to hit, he managed to hit the deck hard and then also bowled the toe-crushers to keep the batsmen guessing. In the same over, he also got the wicket of Axar Patel and went only for 3 runs out of which one was the leg byes. The penultimate over of the innings was also excellent as even Marcus Stoinis couldn’t hit him out of the park as a fine spell came to an end with the figures of 1/19 as Mumbai restricted Punjab to 174 runs.

Captain fantastic and Krunal come to the fore (56* off 21)

Rohit Sharma pushed himself down the order in the chase which baffled many as the required run-rate soared high. He came to bat with his team needing 75 runs in last 7 overs. It was looking tough as Punjab was tightening noose over them and the elimination looked all but certain. But the skipper came to the middle and suddenly things started looking easy.

First, he smashed Mujeeb Zadran for a maximum at the long on and then launched him into the stands off the last ball of the 17th over deep mid-wicket. Though Stoinis’ next over proved to be game-changing as he was taken for 20 runs and who other than Krunal Pandya came back in form big time. While Rohit smacked a boundary off the second ball, the real assault came from his partner who churned out 14 runs in 3 balls to eventually seal the game.

The last ball of the over was special as the huge blow from the left-hander went over long-on which he had hit by clearing his front leg. He turned more brutal against Andrew Tye as well by hitting him all over the park and won the game for his team by scoring the match-winning knock of 31 off 12 balls. The skipper also raised to the occasion by scoring 24 off 15 deliveries. 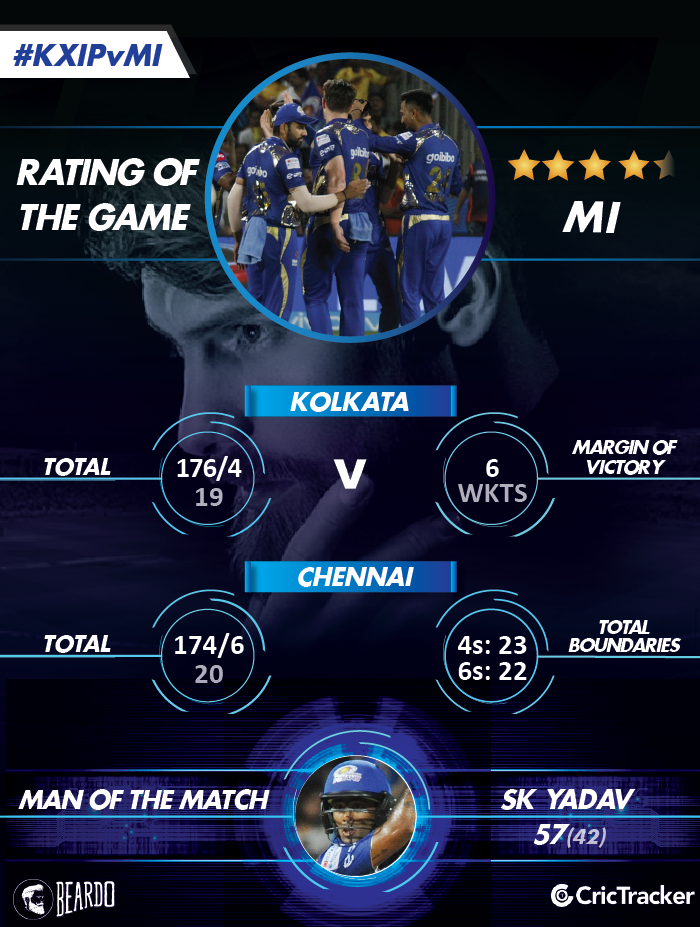