Suryakumar Yadav, Chris Gayle, Krunal Pandya quite a few players put up a commendable show in the game tonight.

Mumbai Indians (MI) put up their potential on display in the must-win stages as they thumped the Kings XI Punjab (KXIP) by six wickets in a thrilling contest hosted by Indore. The defending champions came out with their plans in order to restrict the aggressive Kings XI batting line-up to 174/6. They failed to get going in the first half of their chase despite Suryakumar Yadav’s fifty. Promotion of Hardik Pandya brought down the required rate before their skipper Rohit Sharma and Krunal Pandya finished off with an over to spare.

Yadav has been the pick of the season for Mumbai who turned up with consistent scores at top of the order. The Mumbaikar scored a 42-ball 57 with six fours and three sixes to ensure his team didn’t lose the plot in the chase. He turned out to be the Most Valuable Player of the match as he earned a value of 68 lakhs according to the CricTracker’s Player Value Algorithm. The Kings XI Punjab skipper turned out to be the Liable Player of the Match as he failed to take a wicket in his four overs. 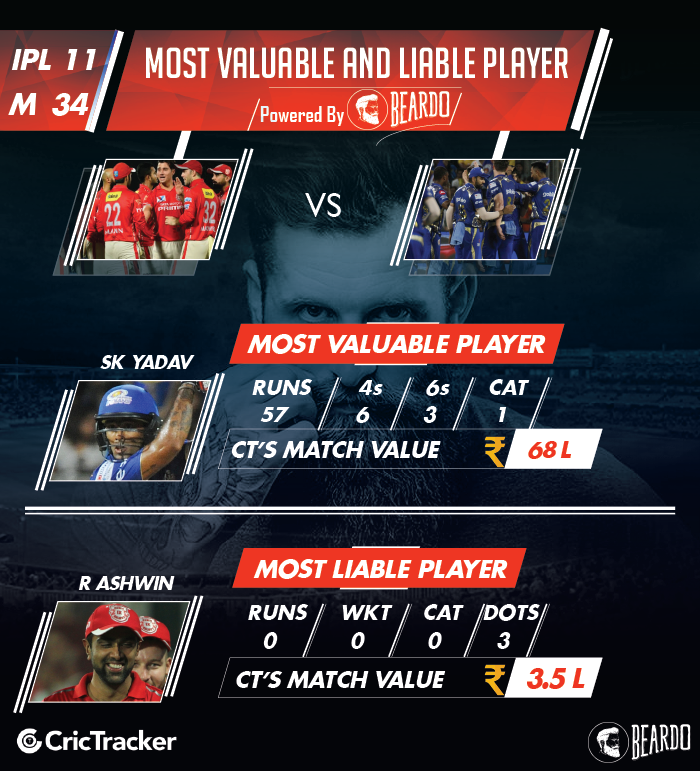 Mitchell McClenaghan ensured he didn’t repeat his mistakes from the previous match as he went for 31 runs in his four overs and bagged the crucial wicket of Karun Nair. He earned a value of 22 lakhs from this match which is three times his average match salary. Surya’s value of 68 lakhs is also nearly three times his average match salary as he was bought for 3.2 crores by Mumbai. The South African all-rounder JP Duminy didn’t have a big role to play in the match except for the over he bowled and some good work in the field. 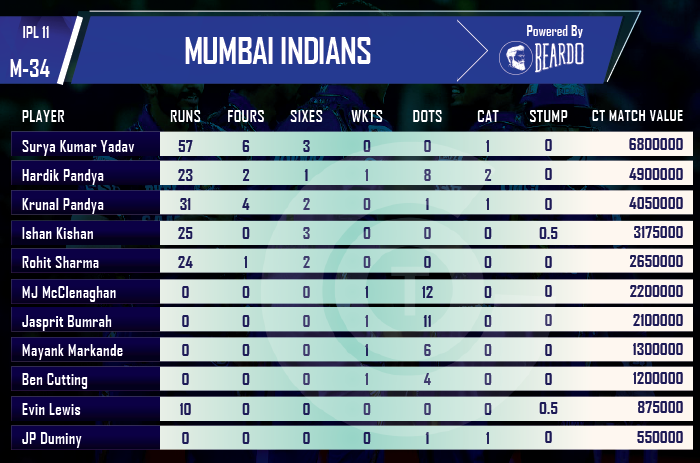 Chris Gayle turned out to be the Most Valuable Player for KXIP in the match with his 4th fifty of the season. He scored a 40-ball 50 with six fours and two sixes to earn a value of 55 lakhs. His efforts are equivalent to 3.85 times his average match salary since Punjab paid him a contract worth two crores. Hardik Pandya’s all-round efforts helped him earn a value of 49 lakhs despite his costly 22-run over to end Punjab’s innings. 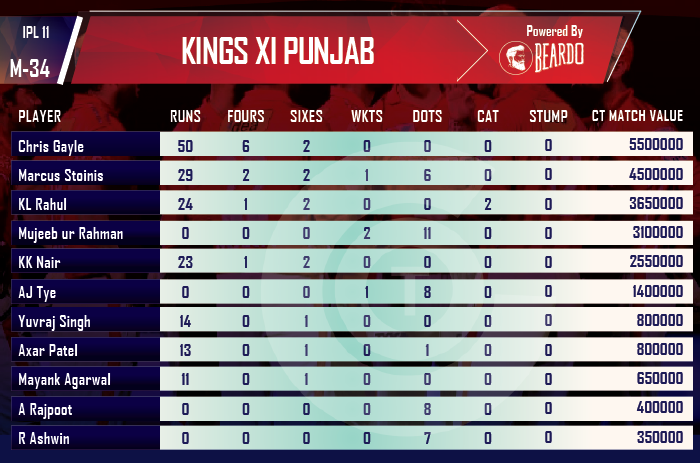