The Men in Yellow have lost two out of their last three matches.

Chennai Super Kings (CSK) suffered a crushing loss at the hands of Kolkata Knight Riders (KKR) at the Eden Gardens. It was the probably their poor performance of the season given that they dropped catches, fumbled in the field and also looked out of ideas in the death overs. The Men in Yellow also lost their top position after the defeat and slipped to the second spot in the points table. They will face the Royal Challengers Bangalore (RCB) in the clash of superstars on Saturday in Pune.

MS Dhoni was the architect of their victory when these two teams last met but RCB is coming off a confidence-boosting victory over Mumbai and will be keen to continue their winning run. CSK have been plagued with injuries as usual which have affected their bowling to a large extent and would want to beef up themselves in that department. Their batting line-up is perfect and no changes are needed in the top-order whatsoever.

Here we bring you the predicted XI of Chennai Super Kings for this game:

Faf du Plessis is making sure he is finding his form after playing few back-to-back matches. It seemed that he found his groove in the last game but was undone by a googly from Piyush Chawla. Though his 27-run knock off just 15 balls must have given the confidence to the team management. He needs to concentrate on playing a big innings now which might not be too far away.

Shane Watson would only have to concentrate on being consistent now as he is the most valuable player of the tournament so far. He was on the way to score yet another half-century before being sent back by Sunil Narine. He is consistently chipping in with a couple of overs with the ball but Dhoni would love him to take a wicket or two to bowl his full quota of overs.

Suresh Raina has played too many brief cameos this season and is not having his best time in the middle. With 236 after 8 matches at a strike-rate of 135, the left-hander needs to improve on his batting a lot going forward. He has been guilty of getting out after being settled which doesn’t work in team’s favour sometimes. Ambati Rayudu endured a rare failure in the last match and it is being said despite him scoring 21 runs because of the standards he has set this year. He should be back to scoring runs in this game and there is no worry about his form at all.

The juggernaut of MS Dhoni has continued impressively and the veteran has improved with every game. Many are experiencing the shades of old Mahi in his blistering innings so far. This could become his second coming as far as his batting is concerned. Dhruv Shorey might make his first appearance of the season in place of Ravindra Jadeja but will have to make do with his top order batting slot. He might have to adapt himself and look to finish games at this position for CSK.

Dwayne Bravo has tailed off with his death overs bowling in the last couple of matches. He was taken apart by KKR in the last game and he needs to come back into the form soon as the team is heavily dependent on his 4 overs at the backend of the innings. Though his recent bowling figures could be termed as a blip, it should not become a norm. He has not been getting batting at all and the team can experiment by promoting him up the order just to keep him ready for the crunch situations.

Harbhajan Singh has been bowling well and finally took a wicket in the previous match of Rinku Singh off a nicely flighted delivery. He has gone into a shell by concentrating only on saving the runs. But Dhoni would be wanting the most experienced bowler in the line-up to get him more wickets going deep into the tournament. Karn Sharma has surprisingly not been used much and even he would be itching to contribute to the team’s cause by bowling full quota of his overs.

Shardul Thakur should make a comeback into the side in place of KM Asif who has been going for runs in the death overs. Even Thakur was dropped for the same reason and the management is trying hard with him as the coach Stephen Fleming also termed him as ‘work in progress‘ bowler. The Mumbai youngster will have to repay the faith shown in him if given another opportunity. Lungi Ngidi’s pace has impressed Dhoni and he should continue playing more games as he will only get better from here on.

Here’s the predicted XI for CSK against RCB 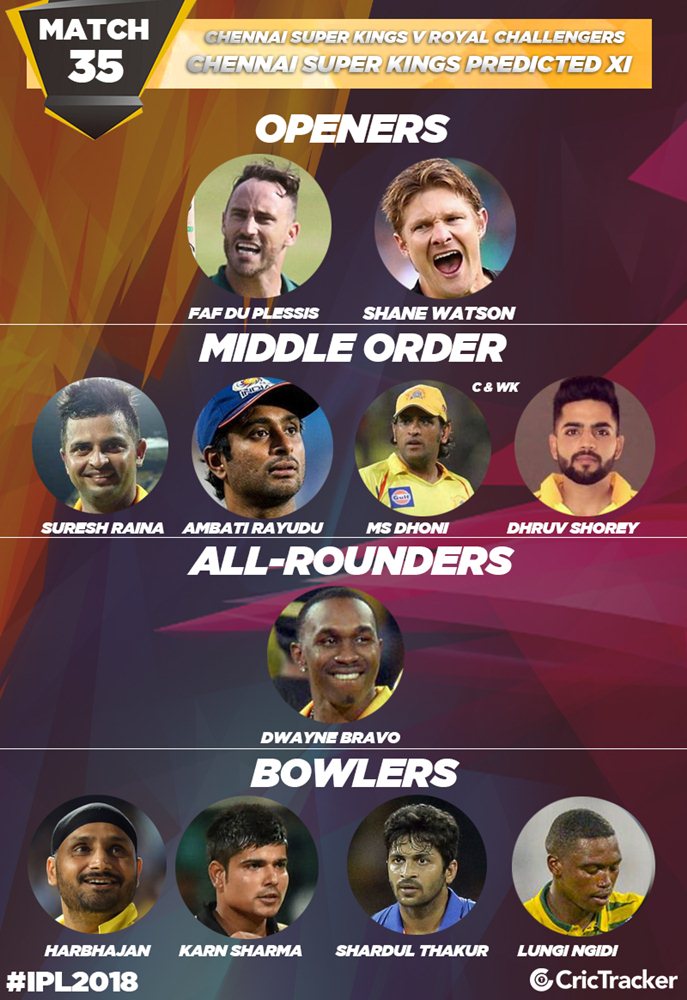