Will Mumbai be able to get past the juggernaut of KKR?

Mumbai Indians (MI) can’t afford to relax only after the win over Kings XI Punjab (KXIP) the other day and they will have to keep their heads high. A loss at any stage would lead to their elimination from the tournament. They played with decent plans in place against Punjab in Indore which worked in their favour. It is important for Rohit Sharma and his men to not drop their intensities as all the teams are looking to seal their place in the playoffs with the league reaching its business end.

The journey is not at all easy for Mumbai ahead as they face Kolkata Knight Riders (KKR) at the Wankhede Stadium in their next encounter. They are coming off an impressive and win over Chennai Super Kings (CSK) and would look to climb the ladder in the points table. The hosts have to concentrate on their game and make sure they don’t give away the home advantage. A win in this game will surely give them the momentum and the belief of qualifying for the playoffs.

Here we bring you the predicted XI of Mumbai Indians against KKR:

Evin Lewis has been out of touch in last few matches and the lack of overseas players in the line-up is hurting Mumbai. It is a known fact that he can win matches single-handedly on his day. Mujeeb Zadran got better of him in the last game which put pressure on his partner. It is crucial for Mumbai’s fortunes that he stays in the middle at least for the first 6 overs and provide his team with a good start.

Suryakumar Yadav has been the standout performer for the defending champions hands down. He is fourth in the list of highest run-getters with 340 runs at an average of over 37 and the strike-rate close to 130 which is perfect for an opener. He has managed to steady ship for worst positions and would love to finish games now by playing patiently in the middle overs.

Ishan Kishan too has gone off suddenly which is working for his team. The skipper has pushed himself down for him and the youngster has to prove his worth. Consistency is needed from him and once again threw his wicket after getting his eye in against Punjab. Rohit, on the other hand, is coming off age it seems and has looked more confident as the tournament has progressed. His batting looked sublime last night and it was his presence in the middle which worked wonders for Mumbai and eventually they were able to seal the deal.

JP Duminy in the middle order is to arrest the collapse definitely but his role comes under the scanner is the steep chase sometimes. When the required run-rate soars over 10, hard-hitting batsmen are needed and he is not that kind of a player. Nevertheless, he will continue to be in the playing XI for them and can also bowl a couple of overs whenever his captain wants him to.

Krunal Pandya has come back in from which is a huge news for the Men in Blue. The way he smashed the ball out of the park must have given a lot of confidence to the change room who can think of promoting him up the order now as well. His bowling has always been superb as his role will be crucial going ahead. Hardik Pandya too has come to the party after starting the IPL meekly which is a good sign. Interestingly, he has contributed with the ball more than his batting which has covered up a lot of workload of the other bowlers.

Ben Cutting finally looked like a part of the team in the last game. He scalped the most important wicket of Chris Gayle who was set to go bonkers after scoring a half-century. It remains to be seen if the team will make smart use of his batting in the upcoming games.

The young lad has stood up every time and has shown that he is a tough character. The wicket of KL Rahul the other day sucked all the momentum of Punjab’s innings and he has still kept himself going after the way he had started the tournament. Jasprit Bumrah is a champion bowler and he once again proved it with his fiery spell against Punjab. After bowling all his overs in difficult circumstances, he went only for 19 runs while picking up a wicket as well. His toe-crushing yorkers are also back and Mumbai is finally looking like a team to beat now.

Mitchell McClenaghan brings the much-needed energy into the team. His hit-the-deck bowling style works more often than not and the Kiwi has shown the way for Mumbai by picking wickets up front whenever needed. Each and every player has to keep playing the same way they did against Punjab and soon they will be able to turn around their fortunes.

Here’s MI Predicted XI for the game against KKR 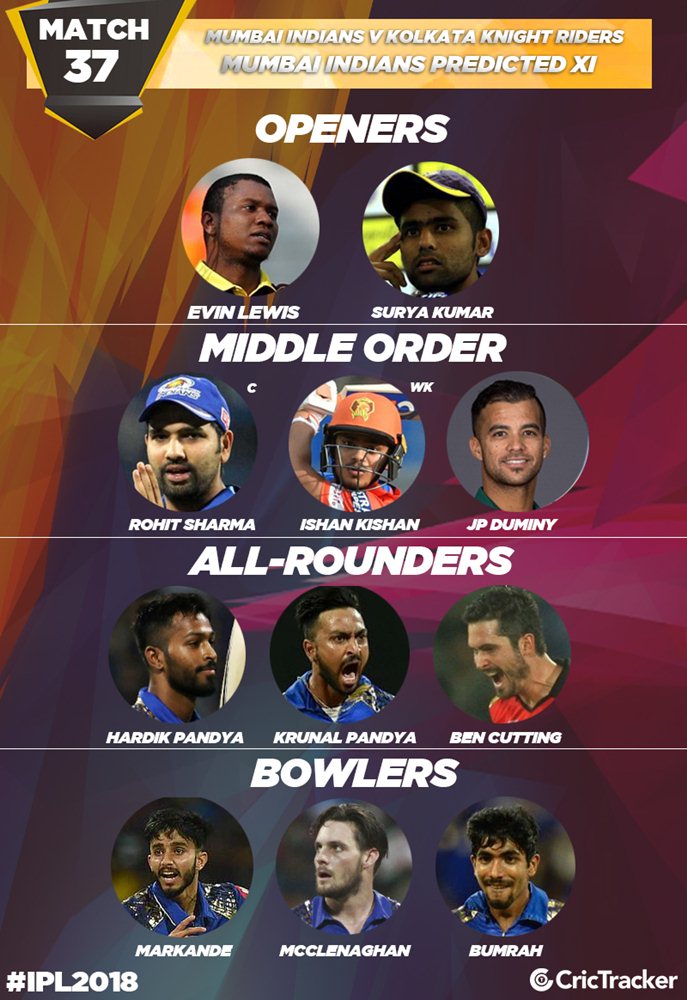