KL Rahul scored his 3rd fifty of this season to take Kings XI Punjab over the line.

Kings XI Punjab bounced back strongly after two big losses as they thumped Rajasthan Royals by six wickets at the Holkar Stadium in Indore. The visiting side started their innings a little uneven however Jos Buttler’s 2nd consecutive fifty made up for it. Some poor batting from their middle order ensured that they finished with just 152 on the board for the loss of 9 wickets. Kings XI’s chase was closer than what scoreboard suggests as they were four down for 87 in the 13th over. KL Rahul pressed on the accelerator when they needed 43 from four overs and the home crossed the line with eight balls to spare.

Rahul’s power game was once again on display as he went bonkers after bringing up his fifty off 44 balls. He scored 34 runs in the next ten balls he faced to ensure KXIP bagged two points. The keeper-batsman turned was the Most Valuable Player of match earning a value of 1.03 crores as per the CricTracker’s Player Value Algorithm. He justified his price tag to 11 crores as his match value is 1.32 times his average match salary. 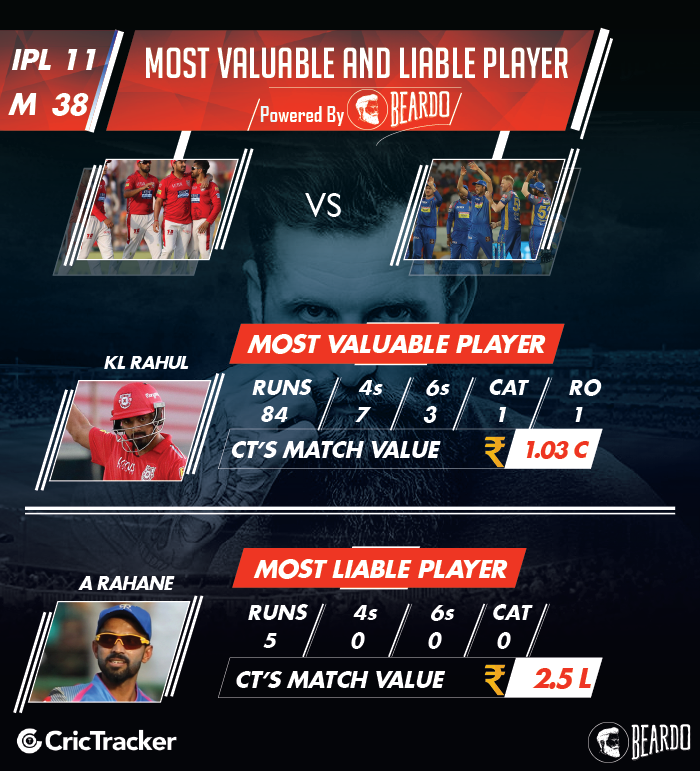 The Rajasthan Royals‘ skipper Ajinkya Rahane was the Liable Player of the match scoring only five runs. He came down at No.3 to accommodate D’Arcy Short at the top who didn’t make any difference scoring only three runs. Mujeeb Ur Rahman was named the Man of the Match for ending up with figures of 3/27 in his four overs.

He earned a value of 64 lakhs in this match which is 2nd highest behind Rahul. Mayank Agarwal returned with the lowest value among the KXIP players as he scored only one run and his efforts at the boundary to dismiss Ben Stokes, unfortunately, went into Manoj Tiwary’s account. 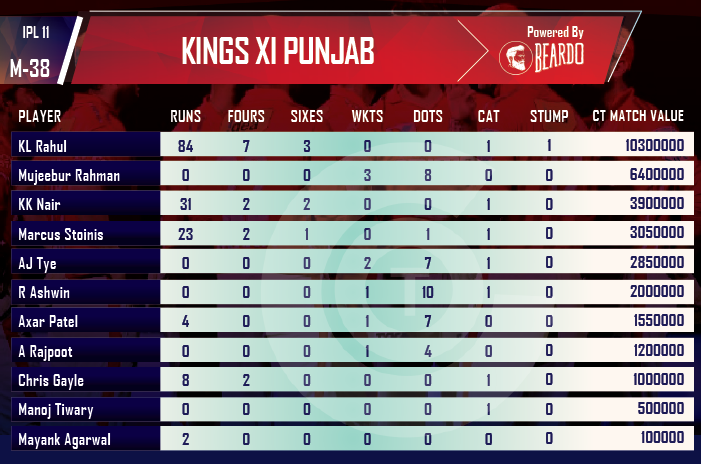 Royals bought Shreyas Gopal for the base price of 20 lakhs. He made crucial 24 runs at the end today that helped him to earn a value of 28 lakhs which is 19.6 times his average match salary. The Afghanistan spinner Mujeeb’s match value of 64 lakhs is 2.24 times his average salary per match for the season. 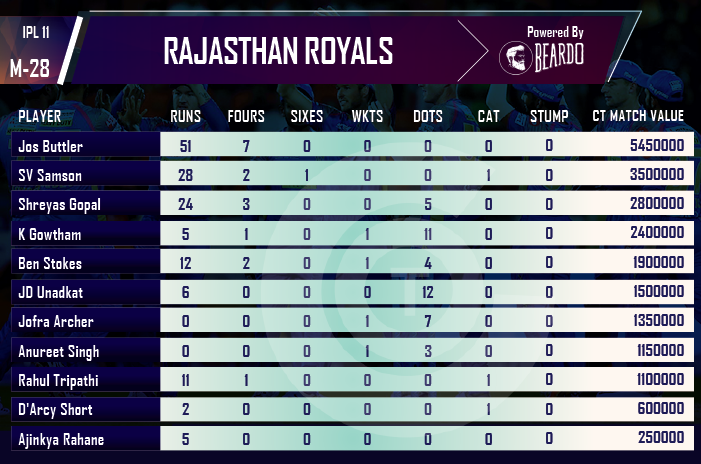