Will Kane Williamson make any changes?

The Sunrisers Hyderabad team is having a great season this year. Although they were dented by the absence of Warner before the start of the tournament, the team has made some great inroads in the tournament. The team has lost just two out of the nine games played so far. Furthermore, they sit on the top of the points table with 14 points to their name.

The Sunrisers will be playing the Royal Challengers in Hyderabad on Monday. While the result of this match will not make much of a difference to Sunrisers making it to the playoffs, it is a must win for RCB. However, RCB will have to be on the top of their game to defeat SRH. They lost the game to CSK due to a batting collapse and they will have to be extra cautious.

SRH, on the other hand, have won four out of their last four games. They will be riding high on confidence and will be looking to put a good show against RCB. Also, there is no scope of them making any changes to their XI. Here is the predicted XI for the Sunrisers:

Alex Hales has made an impact as soon as he got a chance to play for the SRH. He continued his good form into the second game proving the fact that scoring runs in his first IPL game was no fluke. 45 seems to be quite an unlucky number for Hales as he got out on the same number in both games played and he will like to cross that mark in the next one. He played a fluent inning and gave SRH the kind of start they would want in the game against DD.

Shikhar Dhawan hasn’t really been among the runs in the last few games. He isn’t timing the ball as well as he did before he was injured. However, he tried to show some intent in the last game against DD. Shikhar scored 33 off 30 and found the middle of his bat more often than not. He will want to carry this confidence into the next game and perform well for his team.

Kane Williamson has been brilliant this season. Although he is not scoring his runs at a great pace, he is holding the SRH innings together. Williamson has scored 354 runs this season at an average over 50 showing the kind of impact he has had. Yet again, he will be crucial in the match against RCB, especially against Chahal and Umesh Yadav.

Manish Pandey and Wriddhiman Saha are the other two batsmen in the middle order. Manish isn’t is great form but is managing to find a place in the side due to his expensive price tag. He is not getting his big shots right and that is increasing the pressure on him. Saha has been terrible with the bat and is in the side solely because of his keeping abilities.

Shakib’s form is patchy this season. But he is too good a player to be dropped. SRH will need one more win to make it to the playoffs and they can not afford to sideline him. Although there might be a temptation to play Carlos Brathwaite, they will only fancy trying him once they are safe in the playoff race.

Yusuf literally won the game for SRH against DD. He came in at a tough time and showed some great resilience. Yusuf is a sure shot choice to make it into the XI. He also comes in handy with the ball. Also, we might see him bat a little up the order seeing him bat in the last innings.

These four bowlers will complete the bowling lineup of SRH. Bhuvneshwar Kumar made a comeback into the XI after almost two weeks time. In his first outing after the break, Bhuvi looked a bit rusty. He conceded 17 runs in the last over before which SRH’s bowling looked top class. The bowlers came back strong after Delhi got off to a flyer. The last over could have potentially made the difference between both the sides.

However, Bhuvneshwar Kumar is a world class bowler and is expected to come back strong in the next game. Sandeep and Kaul were expensive due to the initial onslaught from Prithvi Shaw. They will want to address this issue and perform better against RCB. Rashid Khan, as usual, was phenomenal and brought SRH back into the game.

Here’s SRH Predicted XI for the game against RCB 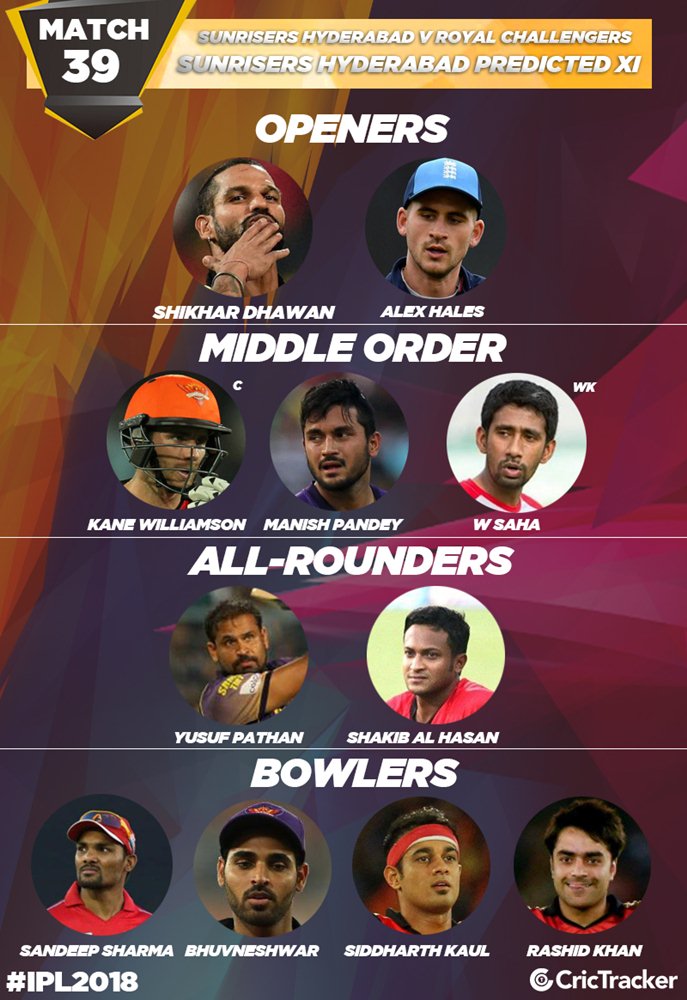