Ajinkya Rahane often struggled to get going against SRH and Bhuvneshwar Kumar.

Ajinkya Rahane will have a new role to play in the 11th edition of the IPL as he will lead Rajasthan Royals in the absence of Steven Smith. Rahane, well known for playing an anchor role at the top of the order, will have to lead from the front and play a role in team’s strategies. The Mumbaikar has a captaincy experience of only one IPL game and overall limited-overs games in his overall professional career. His journey as an IPL captain starts against Sunrisers Hyderabad.

Rahane might not be too happy to face SRH against which he averages the lowest in the Twenty20 format. The RR skipper scored 184 runs in 11 games against SRH with two fifties and three ducks. To add to his misery, Rahane averages only 14.16 at the RGIC Stadium in Hyderabad which will be hosting their opening game. His struggles against the new Hyderabad franchise are a reflection of his poor record against Bhuvneshwar Kumar. Rahane got out to SRH’s bowling weapon on six occasions in the IPL. 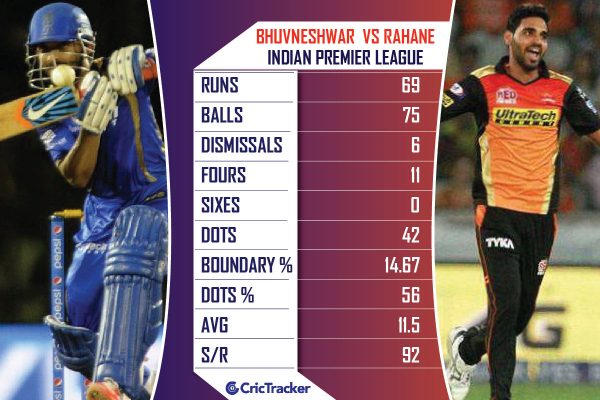 Rahane faced 75 balls against Bhuvneshwar out of which 42 were dot deliveries. He scored 69 runs against one of India’s best bowlers at the moment at an average of 11.5. No player other than Bhuvneshwar got Rahane’s wicket more than three times in this league. Rahane got out three times in IPL to Ravi Ashwin, Sunil Narine, Amit Mishra and Karn Sharma. Bhuvneshwar, in fact, dismissed Rahane on four occasions for a duck in the IPL including twice in the 2016 season.

Troublemakers to Ajinkya Rahane in the IPL: 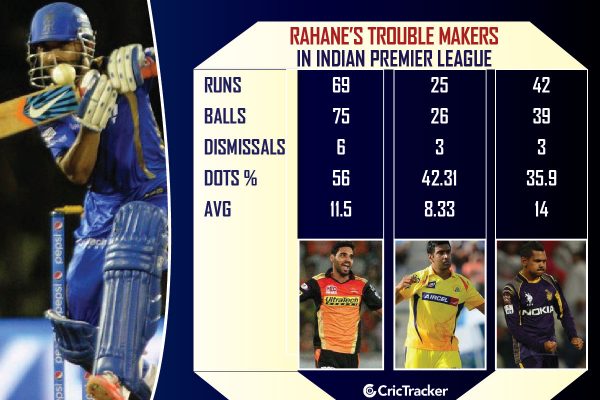 Ajinkya Rahane is among the three players who got out four and more times by Bhuvneshwar in the IPL. The Indian pacer dismissed Parthiv Patel on five occasions and Manish Pandey on four occasions. Pandey will be delighted to be joining SRH as he will now face the Bhuvneshwar only in the practice sessions.

Bhuvneshwar Kumar’s bunnies in the IPL: 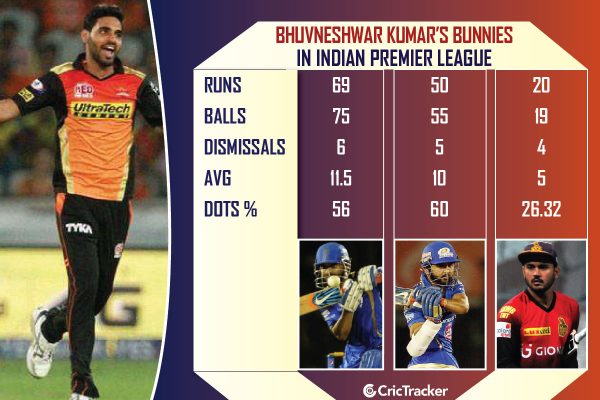