Who will clinch the victory?

The Sunrisers Hyderabad and Rajasthan Royals received major blows just ahead of IPL 11 as their captains David Warner and Steve Smith were barred from taking part in the tournament because of the suspensions imposed on them by their domestic board for ball-tampering. They have had to appoint new captains on a quick notice and it’s needless to say both these teams are a little shaken at the moment.

However the good thing about them is that they have got good depth in their squads and even in the absence of their regular skippers, there is no reason why these two teams can’t go the distance. They will be looking forward to a good beginning first of all as they lock horns with each other at the Rajiv Gandhi International Stadium, Hyderabad tomorrow.

Some of the pitches at the Rajiv Gandhi International Stadium last season were abrasive and two-paced and it proved to be hard for the batsmen to time their shots to perfection as the ball didn’t quite come off the wicket at a decent pace all the time. It was a bit up and down as well at times and that’s the reason not too many games there were high scoring ones.

If it’s a similar kind of pitch again, the scores in the range of 160-165 will be round about par. In night games with the possibility of dew around, it’s always ideal to insert the opposition and let them post a target first rather than setting a target yourself as defending the scores is much tougher than chasing them in dewy conditions.

Chasing in T20 cricket is a better option even without the dew factor as you have an idea of what tempo to go with since you already have a score in front of you. It will be really surprised if a captain wins the toss and doesn’t choose to bowl first.

Kane Williamson will open the batting with Shikhar Dhawan and Wriddhiman Saha will slot in at 3 to take advantage of the field restrictions as he is not a great death batter. Manish Pandey and Shakib Al Hasan at 4 and 5 respectively will be the two pillars in the middle order and will play steady cricket with calculative stroke-play, while Yusuf Pathan and Deepak Hooda will go big at the end.

Bhuvneshwar Kumar and Sandeep Sharma will operate with the new ball, while Billy Stanlake with his height and pace will be the X-factor as the first change bowler before the quality spin duo of Rashid Khan and Shakib take over.

The skipper Ajinkya Rahane will slot himself right at the top as that’s the position he is ideally suited to in limited-overs cricket and his opening partner in all probability will be the Aussie left-hander D’Arcy Short who had a wonderful BBL recently. Rahul Tripathi, the last year’s IPL sensation, will bat first down followed by another class player Sanju Samson at no. 4. The two English superstars Ben Stokes and Jos Buttler will be Rajasthan’s finishers, while Stuart Binny will hold the no. 7 slot.

Jofra Archer, who is featuring in the IPL for the first time, will lead the Rajasthan bowling unit, while the second specialist fast bowler in the attack will be Jaydev Unadkat. The two Karnataka youngsters Krishnappa Gowtham and Shreyas Gopal will form the spin duo and they will have to ensure they chip away with the wickets at regular intervals in the middle overs.

The Ben Stokes-Jos Buttler factor makes Rajasthan a much stronger batting unit. These two are genuine match winners with the bat and can change the course of the games from any given situation. They have got big shots against both fast bowlers and spinners and it’s very hard to contain them once they get going. And Rajasthan, along with these two, has some decent striking force up top as well in the form of D’Arcy Short who struck two T20 hundreds in BBL 7 not so long ago.

Hyderabad’s batting is not the same anymore in the absence of Warner. The left-hander used to put a lot of impetus into the innings right from the very outset and his services will undoubtedly be missed. Hyderabad doesn’t have any other power player of the same caliber as a like-for-like replacement for Warner. So there will be a change in the game plan and it’s Shikhar Dhawan who will go hard at the top now with Kane Williamson playing sedate and holding the innings together from his end. Manish Pandey and Yusuf Pathan are the experienced T20 players and they will have to step up to the plate as well.

Bowling-wise, Hyderabad possesses more quality and balance as they have their bases covered for different stages of the innings. Rajasthan’s bowling has certain weak links which can be targeted. They lack experience as well in comparison to the Hyderabad bowlers.

The prediction is for the Sunrisers Hyderabad to beat the Rajasthan Royals in this match and start the IPL 11 on a winning note. 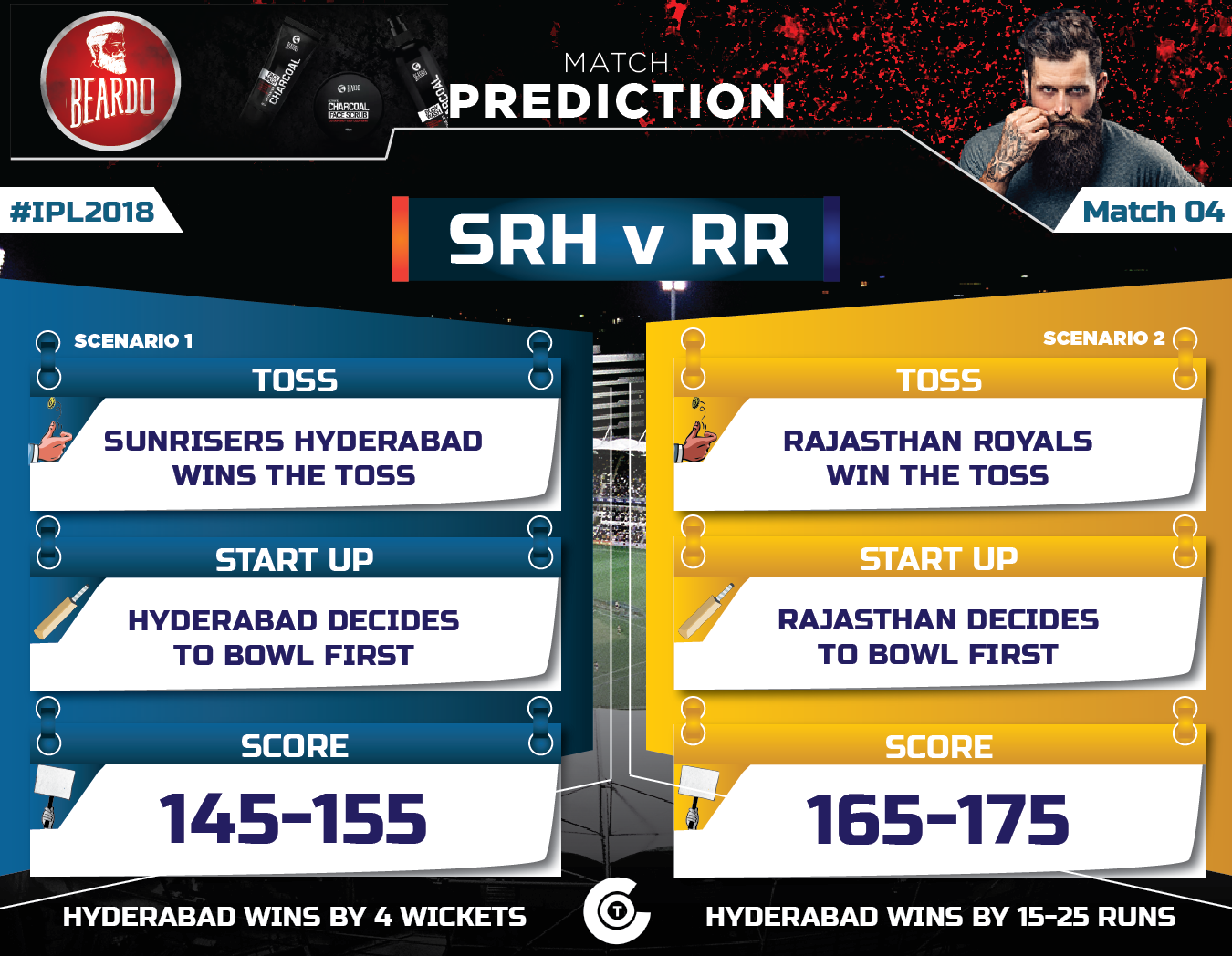