The KXIP skipper has dismissed the RR captain three times in the IPL thus far.

The Ajinkya Rahane led Rajasthan Royals have failed to produce results based on their performances and are on the verge of getting knocked out of the tournament. Royals now need some special performances in their remaining five matches having won only three of the nine matches they played so far. They were restricted by the Kings XI Punjab’s spinners on Sunday and will once again face them in the reverse fixture after a day’s gap.

Ajinkya Rahane’s batting form has been the biggest concern for Royals in the tournament. The RR skipper started with some attacking innings before a couple of low scores. His inability to accelerate was exposed as he couldn’t take his team over the line against SRH as he crawled his way to a 53-ball 65. In the last two matches, Rahane demoted himself to accommodate D’Arcy Short who opened along with Jos Buttler, a move that didn’t come off well.

Buttler has scored fifties in both the matches where he opened the innings and Royals will be tempted to continue the England player. Ajinkya Rahane has to be the other opener keeping in mind the team’s struggles against spinners and the fact that the Jaipur pitch assists the slow bowlers. As the Kings XI heavily rely on their spin trio, Royals should bring in Heinrich Klaasen who can counter the spinners in middle overs instead of D’Arcy who has repeatedly struggled. 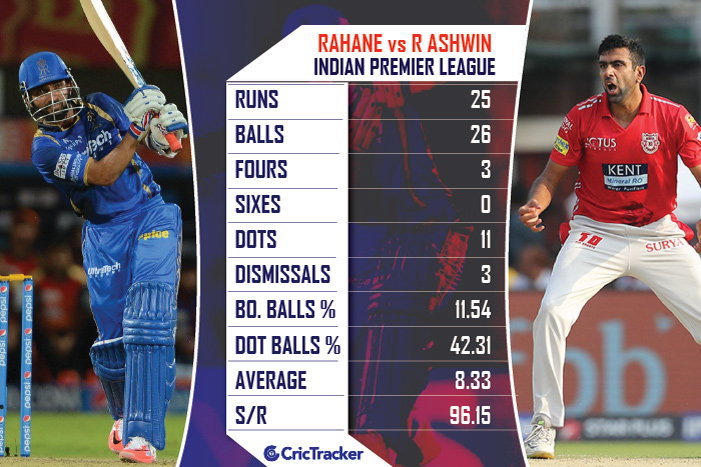 Rahane’s real battle will be against his opposite number Ravichandran Ashwin. The off-spinner has regularly bowled a couple of overs in the powerplay this season. It will be interesting to see how Rahane fares against Ashwin who has troubled him in the IPL. The RR skipper has got out thrice in the league thus far to Ashwin having faced 26 balls. Rahane managed to score only 25 runs against the KXIP skipper with three boundaries throughout his IPL career.