Though KL Rahul played a heroic knock of 95* runs, at no stage it looked like that he will win the game for his team.

Rajasthan Royals (RR) managed to stay alive in the tournament with an exceptional performance in all the departments to trump the Kings XI Punjab (KXIP). They read the pitch perfectly and then played cleverly going hard in the powerplay against the new ball. Then with the ball in hand, the captain used his bowlers cleverly and never allowed the likes of KL Rahul to get going despite him staying unbeaten until the end for his team. However, one can claim that the Royals finally played to their potential and remained alive in the IPL for now.

Jos Buttler’s season has turned around dramatically ever since it rained in Delhi. The curtailed game had set the daunting target of 151 in front of the Royals in 12 overs. The management realised they need quick runs at the top and promoted Buttler only for him to smash the 18-ball half-century. Since then he has sealed his position at the top of the order bringing laurels to his team.

It was no different today after his skipper won the toss and opted to bat first. He began his innings in style by scoring a couple of boundaries in the very first over of the match. While the first one was a poor delivery from the bowler, he walked towards the Marcus Stoinis and straight-batted the length ball down the ground. Buttler got himself going then and continued playing his strokes in the powerplay. He concentrated more on playing the grounded shots and reaped immediate rewards.

He alone smacked 7 fours and a six in the powerplay out of which the solitary maximum he hit off Axar Patel was the best. It was the second over of the innings and Axar fired in the ball wide from the batsman but the length wasn’t good. Buttler crouched low and slapped it over the covers to send it into the stands. The authoritative shot cleared that he was in the mood even as he went on to score a 27-ball fifty. The batting became increasingly difficult as the pitch got slower but he didn’t give his wicket away.

He was eventually dismissed in the 17th over but not before scoring 82 runs off just 58 balls. Interestingly,  he could hit only a couple more boundaries in the post powerplay phase which proves that he was ready to graft his innings today with his team in the must-win situation.

Krishnappa Gowtham has been the find of the season for the Royals this year. The team has played him in all the matches and he has repaid the faith. Much like every game, he was entrusted to bowl in the powerplay once again and was hit for a boundary by KL Rahul. But the youngster didn’t perturb and bowled back-to-back dot balls to only go for 4 runs. The over set the precedence for the whole innings as the visitors struggled throughout the innings.

He was given an extra over by his skipper Ajinkya Rahane and it paid off straight away. Chris Gayle charged at him as Gowtham bowled a wide delivery and stumped him cleverly. It was a huge dent in the confidence for Punjab as their best batsman was foxed by the youngster with his tactics. Everyone was caught surprised as R Ashwin promoted himself to number 3 but the move didn’t work as the magnificent Gowtham castled him in the same over.

Gowtham’s confidence was high after picking the wicket of the Universe Boss as he gave the ball ample air which turned and gripped into the surface only to go through the bat-pad gap of Ashwin. Unfortunately, he couldn’t complete his quota but made a lasting impact in the 3 overs he bowled going only for 12 runs and scalping a couple of crucial wickets. 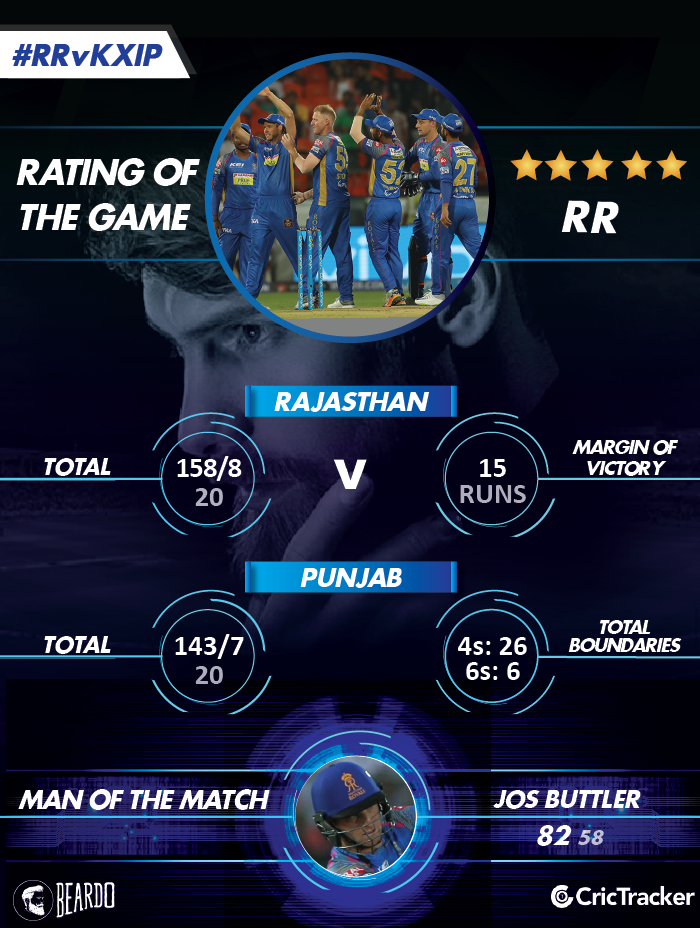