Sunrisers Hyderabad continued their winning streak to knock down the Delhi Daredevils twice in six days and qualify for the playoffs with their 9th win of the tournament. A sensational knock of 128* from Rishabh Pant carried DD’s innings on its shoulders and they posted 187/5. However, the youngster’s inning wasn’t enough to warrant two points for the home side as the bowling wasn’t just good enough on the day. Shikhar Dhawan and Kane Williamson scored unbeaten fifties to guide SRH to a comfortable 9-wicket win.

Rishabh Pant might have been ignored by the national selectors for ODI and T20I squads but he definitely was business tonight with a record inning. He survived a tough period where the ball was turning and didn’t come on to the bat easily. Pant struck seven sixes and 15 fours on his way to an unbeaten 128 off 63 balls. He took on Bhuvneshwar Kumar scoring 26 runs from the last five balls of the innings. His knock was valued at 1.425 crores as per the CricTracker’s Player Value Algorithm making him the Most Valuable Player of the match. Vijay Shankar was the unfortunate player who ended up being the Liable Player in this match. 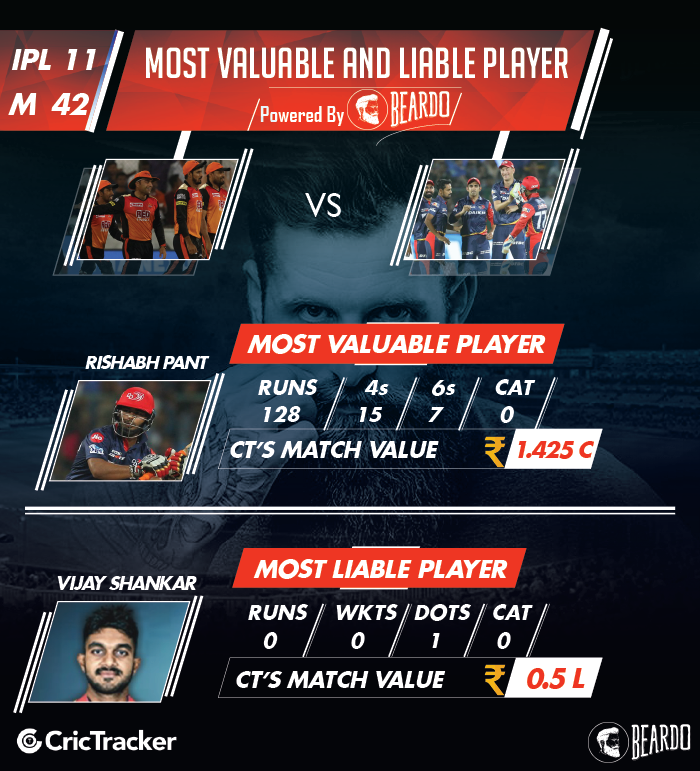 Shikhar Dhawan was Sunrisers Hyderabad‘s Most Valuable Player of the match as his 50-ball 92* was valued at 1.08 crores. His skipper and the partner in a record stand, Kane Williamson, scored an unbeaten 83 off 53 balls. Williamson’s inning was valued at 89 lakhs which is four times his average match salary. Both the Delhi boys Dhawan and Pant’s match values were about 2.5 times their respective average match salaries. Yusuf Pathan and Manish Pandey didn’t earn any value from the match as they didn’t get a chance to bat or bowl. 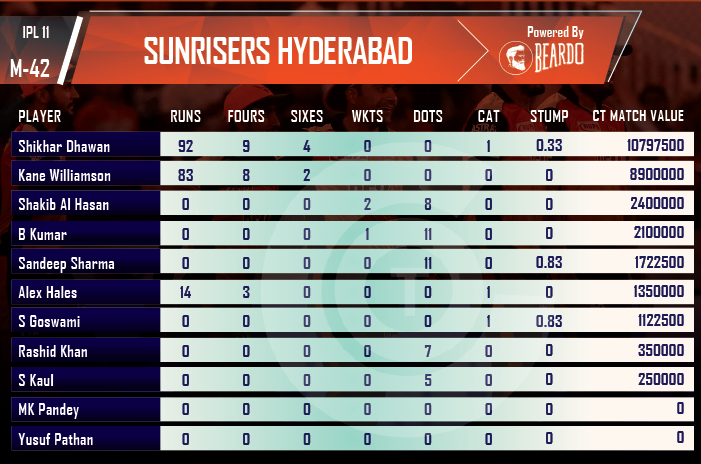 Harshal Patel was a surprise package for DD who was promoted to No.5 to give the innings a push. He later turned out to be the only wicket-taker for the home team. Patel’s match performances earned him a value of 40.5 lakhs which is more than twice his auction price of 20 lakhs. Shakib Al Hasan bagged two wickets in successive deliveries to send back the DD openers which earned him a value of 24 lakhs. 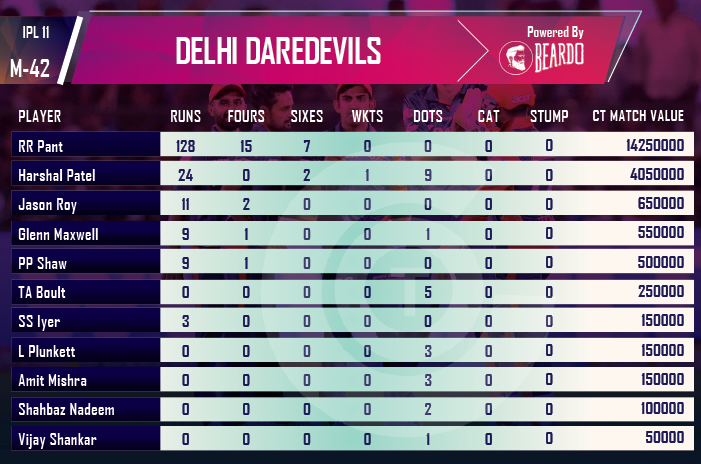