The game is yet another do-or-die encounter for Virat Kohli's men.

The Royal Challengers Bangalore (RCB) haven’t had the most memorable run thus far in the eleventh edition of the Indian Premier League (IPL). However, they still have an opportunity to make amends for their horrendous start and get their campaign back on track. The franchise will now face the Kings XI Punjab (KXIP) at the Holkar Stadium in Indore, which was a batsman’s paradise in the last match at the venue.

Their earlier match against the Delhi Daredevils (DD) was a do-or-die encounter, which they won comprehensively by five wickets. They have to replicate the same performance to keep their hopes of progressing to the playoffs alive. In our article, we take you through their probable lineup of in the must-win encounter.

The openers couldn’t make an impact in RCB’s previous match against DD, but it’s unlikely that the pair will be changed in the upcoming match as well. Moeen Ali has played a couple of matches thus far, however, he hasn’t been able to make a significant impact. He is most likely to leave for England in this week and will wish to finish his stint in a grand style.

Parthiv Patel has played three games and has been impressive in the limited opportunities he has got. The wick-keeper batsman is renowned for giving brisk starts inside the field restrictions. RCB need the experienced campaigners to take them off to a flier against KXIP, who hasn’t been in the best of forms with the leather.

The middle-order has some colossus names in their ranks. Virat Kohli and AB de Villiers decimated the DD bowlers at the Kotla. Kohli has been getting the runs, but couldn’t get the substantial scores under his belt consistently enough. The skipper needs to lead from the front and ensure that the team doesn’t experience any stutter in the next match at the Holkar Stadium.

AB de Villiers wasn’t quite able to find his rhythm after he returned from the viral fever, which was an area of concern, both for RCB and de Villiers. He played a stupendous knock in the last match, which will keep him in a positive frame of mind. Mandeep Singh needs to step up as well. Meanwhile, Sarfaraz Khan will be desperate to somehow contribute with the willow.

Colin de Grandhomme’s prowess with the leather has been phenomenal and batsmen have found it difficult to get the measure of him. He hasn’t had much to contribute with the bat as he has mostly taken charge in the death overs. The all-rounder is expected to play another vital role against Ravichandran Ashwin’s franchise.

Tim Southee has somewhat changed the face of the RCB bowling attack. He has been amongst the wickets and his inclusion has come as a massive boost for them. His abilities as a batsman to find the boundaries can’t be undermined by any means. Both the Kiwi cricketers need to fire in order for their team to curb the belligerent Punjab lineup.

The pitch in Indore was a bowler’s graveyard in Punjab’s’ contest against the Kolkata Knight Riders (KKR). It may not be any different in the next match as well. Umesh Yadav has been excellent and has churned out wickets in the hour of need. The fast-bowler will need to bring forth his A-game and hopefully keep the Punjab batsmen quite.

Mohammad Siraj hasn’t been overly impressive but has been good enough to restrict the opponents. Yuzvendra Chahal finally found some form in the last game with a couple of early wickets against the Daredevils. His role will also be important for the Challengers.

Here’s RCB Predicted XI for the game against KXIP 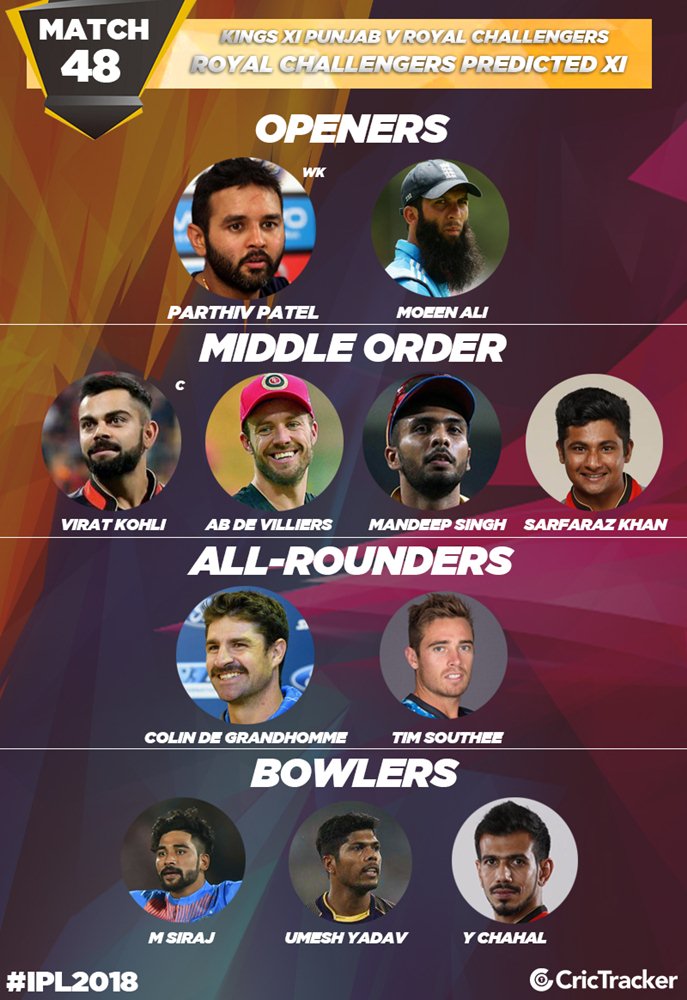