The defending champions crashed out of the tournament.

Mumbai Indians’ (MI) fate in this edition’s Indian Premier League (IPL) hung by a thread. In the last few years, they have been slow starters, but have managed to string together victories and surge ahead in the tournament. The franchise has been on the threshold of elimination on numerous occasions. However, they deserve the credit for not allowing the pressure to unnerve them.

Today, at the Feroz Shah Kotla in New Delhi, Rohit Sharma’s men found themselves in similar territories. Their opponents were the Delhi Daredevils (DD) who had the license to play with freedom. Shreyas Iyer’s boys turned over the Chennai Super Kings (CSK) and Mumbai couldn’t have afforded to take them for granted simply based on the reason that they were placed last in the points table.

Rishabh Pant stands out yet again

Delhi lost their openers in Prithvi Shaw and Glenn Maxwell by the fifth over courtesy of a combination of complacency and recklessness respectively. Shreyas Iyer was arguably their most dependable head and unfortunately, he strained throughout his stint. Rishabh Pant might be the Orange Cap holder (leading run-scorer), but his approach of playing doesn’t infuse confidence.

His form at this venue has been breathtaking and with Delhi’s big guns back in the hut, the onus was on the pugnacious potential to construct a reasonable score. He kick-started his knock with a drive past the extra-cover region and held his pose denoting the impeccability of the shot and for the cameramen to capture him in their lenses. In the next over, a cut shot bludgeoned to the boundary from his willow.

In between, he also telecasted his prowess to pepper the leg-side boundary with a four and a six from Mayank Markande. Surprisingly enough, he managed to hit only one boundary thereafter till the second ball of the 15th over. In the same over, he accomplished yet another half-century in the event. He had an almighty scare soon after as the on-field umpire gave him out LBW only to see the decision reversed.

Meanwhile, he brought forth his brute force and cleared the ropes with one hand on a couple of occasions. The shots weren’t pretty by any stretch of the imagination. However, they fetched 12 runs, which kept the scoreboard moving. Unfortunately enough, he couldn’t carry on and was pinned by Krunal Pandya. Delhi needed him in the last three overs, but that wasn’t the case.

A couple of years ago, Ben Cutting smacked Shane Watson to get the Sunrisers Hyderabad (SRH) to a strong position in the final. This time around, while representing Mumbai, he had an uphill task of keeping his team afloat in the league. He scored 37 runs in 20 balls and till the time has in, Rohit’s boys had the chance to overhaul Delhi’s target and achieve the unfathomable.

In the 18th over, the Aussie took Liam Plunkett to the cleaners and smacked him for 14 runs in the first three balls. The target came down to 24 runs off 15 balls and brought them within touching distance. In the last over, with 18 runs needed, he deposited Harshal Patel for a six over fine leg. The next ball brought down the curtains on the match as well as Mumbai’s chances to progress as Cutting was caught by Glenn Maxwell, his Australian teammate. 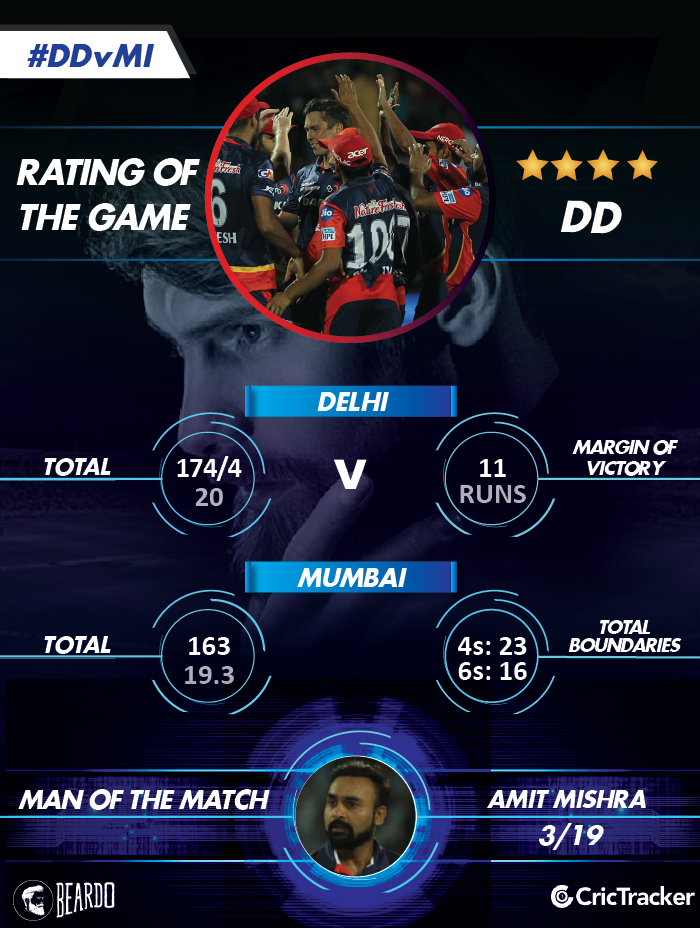