Chennai Super Kings ensured they finished off the league stage with a win as they cruised to a 5-wicket victory against the Kings XI Punjab in a game that went down to the last over. The Kings needed to win big to qualify for the playoffs but lost their main batters in the first four overs and were playing a catching up game thereafter.

A decent effort from the middle-order helped them finish with a respectable score of 153/10. CSK tried to test their lower-order batsmen by promoting them in conditions where the ball was swinging, it helped them to get over the line comfortably with enough wickets in hand.

Lungisani Ngidi has become a household name ever since he made his debut for South Africa during India’s away tour earlier this year. The pacer exploited the conditions at the MCA Stadium in Pune as he knocked out Kings XI Punjab‘s openers KL Rahul and Chris Gayle cheaply.

He finished the game with figures of 4/10 in his four overs that included a maiden over. Lungi was the Most Valuable Player of the match as he earned 96 lakhs as per the CricTracker’s Player Value Algorithm. The South African was bought by Super Kings at his base price of 50 lakhs which is half of his match value. 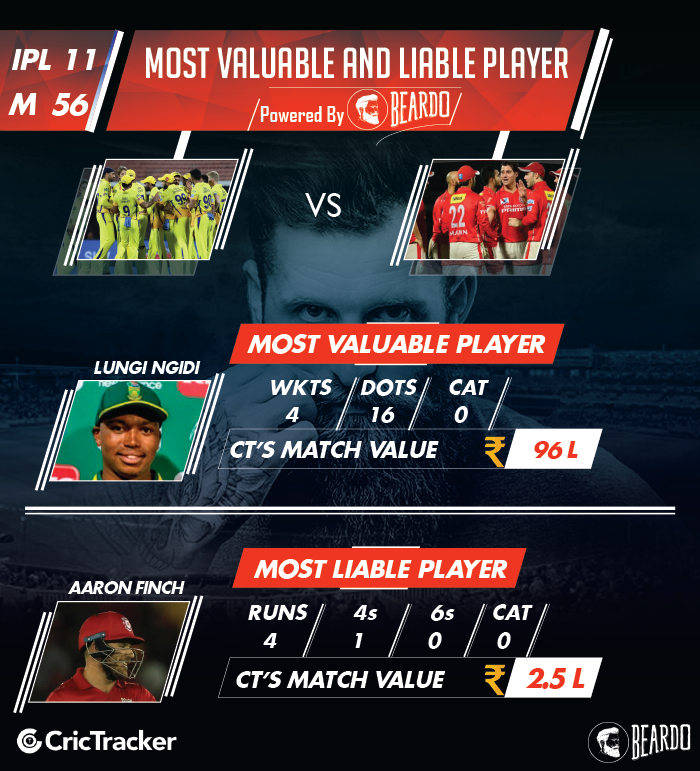 Suresh Raina never looked like he was attempting to chase down the target until the end of 18th over as he was batting on 39 from 42 balls. However, Raina took on Andrew Tye in the penultimate over scoring 22 runs when they needed 23 to win. He earned a value of 75 lakhs for his unbeaten 61 that came in 48 balls with six boundaries.

Deepak Chahar known for his bowling utilized the opportunity of batting higher in the order. He scored a 20-ball 39 with three sixes that brought the required rate into CSK’s hands. Chahar earned a match value of 69.5 lakhs which is slightly less than his auction price of 80 lakhs. 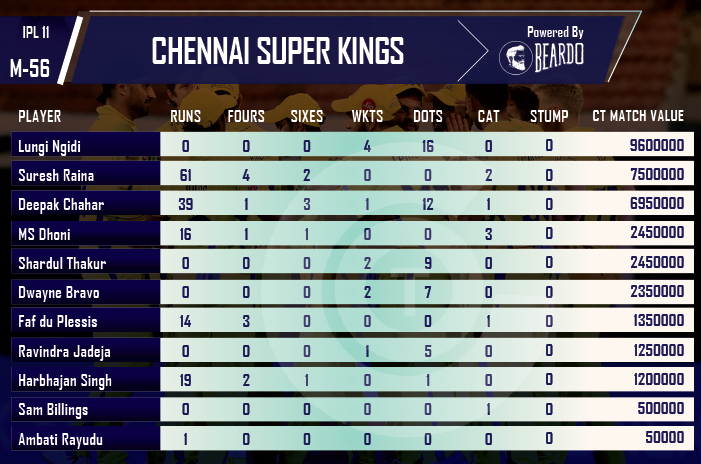 Aaron Finch was the Liable Player of the match as he was dismissed by a ripped from Deepak Chahar for just four runs and later spilled a catch in the slip cordon. Karun Nair was the Most Valuable Player for the Kings XI as he scored a 26-ball 54 with three fours and five sixes which was valued at 60.5 lakhs.

Manoj Tiwary played a good hand after early jolts scoring a 30-ball 35 to stabilize their innings. His knock was valued at 37.5 lakhs which is 5.25 times his average match salary. 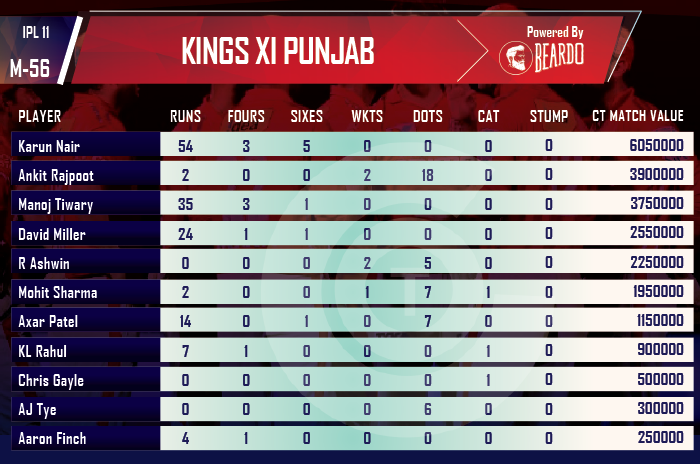