Mumbai Indians tantalizingly fell short in yet another cliffhanger.

Mumbai Indian’s batsmen ‘successfully’ strained every muscle to throw their wickets away. Meanwhile,  Sunrisers Hyderabad put their hearts in to present ‘lifelines’ to the Mumbai batsmen. On one hand, the Mumbai’s top order ‘recklessly’ wound up to outdraw anything and everything that crossed their way. On the other, the Orange Army grassed some ‘dollies’ in the outfield.

The above is a preamble of the power-play while Mumbai batted. The innings promised to be an exhilarating one, but they and ‘only they’ can be blamed for what panned out thereafter for the ‘unnecessary pressure’ Rohit Sharma’s men exerted on themselves. There’s a fine line between ‘being aggressive’ and ‘being reckless’. Mumbai, definitely, found themselves on the wrong side of that line.

How would you describe Rohit, Lewis and Ishan’s knock?

‘Mindless hitting with minimum results’. The seasoned campaigner trod the same route as that of the opening game and quite expectantly, his shots imploded. He was dropped, ‘playing across the line of the delivery’ and he perished to the same stroke, a few balls later.

Another batsman who succumbed to an ugly hoick. Following Rohit’s dismissal, he was the senior batsman and Mumbai needed him to fire. However, his ‘strength’ of throwing caution to the wind with the willow in hand turned against him, unfortunately, but inevitably.

YET ANOTHER batter who served his wicket on a platter. He went after everything, showed the audacity or rather ‘stupidity’ of going after Rashid Khan when the Afghanistan tweaker was churning out some immaculate deliveries. Two balls later, his head went down while playing a similar shot, so did his wicket.

Rashid isn’t one of those bowlers who shy away from giving the ball air and a fair amount of revs, unlike a few spinners who resort to ‘medium pace’ owing to the fear of getting spanked. Also, he dished out the wrong uns with expertise and though he finished with a solitary scalp, he churned out 18 dot-balls as Mumbai batsmen never got a measure of him.

Meanwhile, Mumbai strolled along, more with hope than with any ambition. Kieron Pollard mustered 24 runs off five balls (boundaries and sixes) and four runs in the other 18 balls, which showed his inability to rotate the strike to a large extent, pretty ‘Caribbean‘ in his style of batting. Hyderabad bowlers were dominant, but most importantly, they hunted in packs as every bowler finished with at least a wicket.

On the eve of the tournament, not even the optimists would have speculated that Mayank Markande would emerge as one of Mumbai’s strike bowlers. Surprisingly, he was entrusted to resurrect the game for Mumbai after some toothless bowling by the pacers. The youngster hurled ‘mysteries’ at experienced players at Shikhar Dhawan, Shakib Al Hasan and Manish Pandey, who were left clueless.

Prior to that, Shikhar Dhawan manipulated the field, didn’t employ an aggressive approach, yet raced away at a strike-rate of 160.71, an attribute from which Pollard can take some insight. Nevertheless, the effort was almost neutralized by some exceptional display of temperament by the same pacers who were taken apart earlier- Mustafizur Rahman and Jasprit Bumrah.

From the entertainment point of view, the quotient leapfrogged with every passing delivery. Sunrisers could have been more clinical, however, the win is all that matters. Most importantly what matters the most is that the Orange Army have overhauled MS Dhoni’s Chennai Super Kings (CSK) to the top of the ladder. Meanwhile, Mumbai Indians have some ‘psychological’ conditioning to work on. 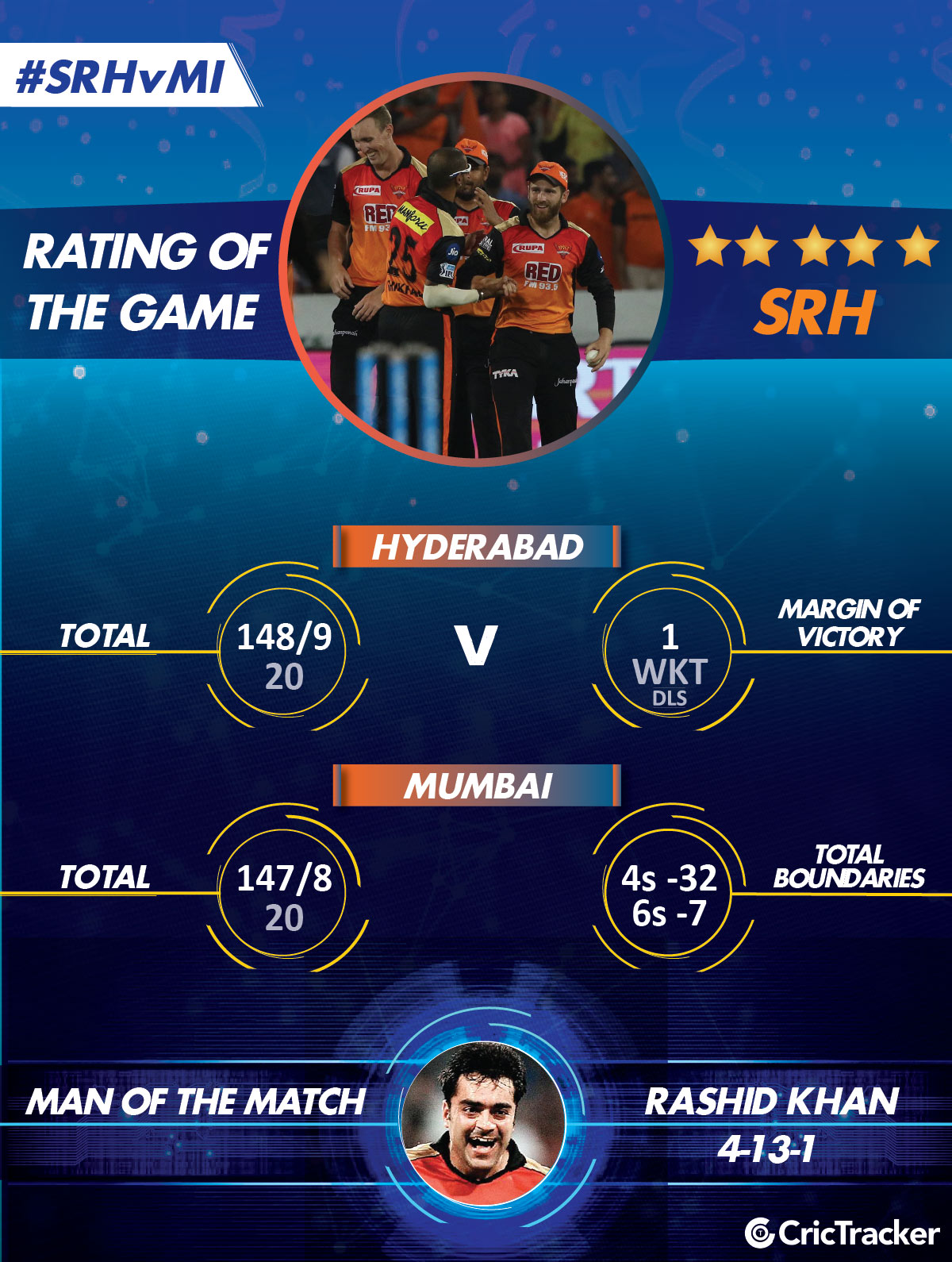