They sent a strong message with a stellar performance against Rajasthan Royals, where Kane Williamson and his troops were just too hot to handle.

Everyone anticipated that the Sunrisers Hyderabad would struggle without their talismanic opener and captain David Warner, who was ruled out of this season. But they sent a strong message with a stellar performance against Rajasthan Royals, where Kane Williamson and his troops were just too hot to handle.

An incredible bowling unit has been their feature ever since they stepped into the IPL in 2013. Once again, it seems as though they’re following suit and their opening game was a testament to it. Siddarth Kaul, Billy Stanlake, Shakib Al Hasan and Rashid Khan ran through their lineup in style and the Mumbai Indians will have a hard time dealing with this bowling contingent.

With the bat, Shikhar Dhawan was offered a Christmas present 8 months prior to the festival as Rahane dropped a sitter. But he rode through his luck and registered a well-compiled 77 to help his side complete the run chase. The batting unit was not tested properly against the Royals, but the same can’t be said with this Mumbai lineup.

The Sunrisers might be heading unchanged for this big game at the Rajiv Gandhi International Cricket Stadium.

Dhawan was highly exceptional with his temperament and despite miscuing a few shots, luck was on his side. He cashed in brilliantly and scored a splendid half-century to take SRH over the line in a comprehensive manner. If he keeps playing like this, he might be a contender for the Orange Cap as well this season.

As we’d earlier predicted, Wriddhiman Saha was asked to open alongside Dhawan. The canny keeper-batsman started off well with a chip over mid-wicket for a boundary but was dismissed in the same over. Nevertheless, he will be handed a few more opportunities and his past record as an opener wins him those chances.

One of the finest batsmen of this generation, skipper Williamson played some fantastic shots in the opening encounter. A pull-shot for six over backward square leg and a few wristy drives were a treat for the spectators. Manish Pandey still remains untested but he will be their main man considering the amount SRH spent on him in the auction.

Deepak Hooda will be eager to prove himself after two dismal seasons with the Sunrisers. Going by his domestic form, the management placed their trust on him yet again and although he remained out of the picture in the first game, he will have a big role to play as the season progresses.

Shakib Al Hasan was outstanding in the previous game, bowling two outstanding overs in the Powerplay. He was brought in early so that Stanlake could shift to the other end, but he ended up bowling so well that Williamson trusted him with another over. With 2/23 in 4 overs, he was one of their best performers on Monday.

Whilst Billy Stanlake kept bowling those lethal bouncers, not everyone was comfortable facing him. He clearly is a great signing for the Sunrisers and will be a useful asset as the season progresses. Bhuvneshwar Kumar had a par outing, but he managed to return with a wicket off the final ball of his spell.

Rashid as always was spectacular with his wrist spin and although he conceded a few boundaries, his economy remained under 6 an over. But the best bowler in the previous match for the SRH was Kaul by some distance. The youngster returned with figures of 2/17 and was outstanding in the middle overs.

Here’s SRH Predicted XI for the game against MI 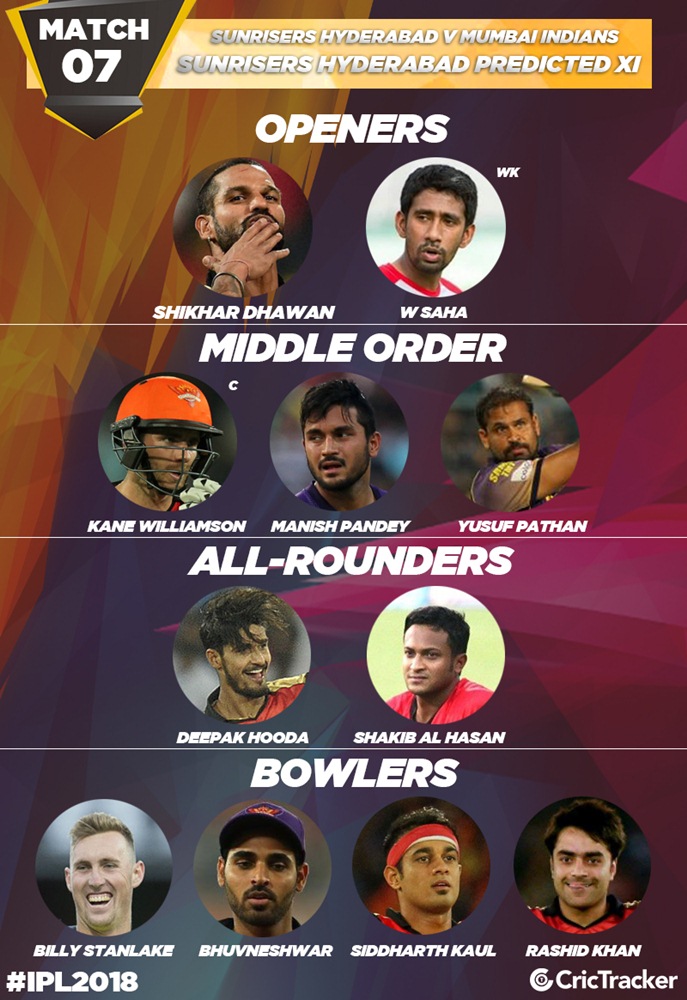