Rohit Sharma and Manish Pandey could only make 11 runs in this match.

Mumbai Indians’ love towards last over thrillers continued as they were yet again on the losing side by 1-wicket margin against Sunrisers Hyderabad. At the venue where they won their 3rd title by a narrow 1-wicket win, Mumbai nearly pulled off an unthinkable result. The home team needed 15 from last three overs but lost four wickets in no time to bring the equation to 11 from the final over. A calm and composed knock from Deepak Hooda and Billy Stanlake ensured their team crossed the line.

In this close encounter, Shikhar Dhawan turned out to be the most valuable player of the game as per the CricTracker’s player value algorithm. Dhawan hit eight fours during his quick-fire 28-ball 45 as SRH cruised towards a win and bagging a value of 50 lakhs. Rashid Khan was named the man of the match but only earned 19 lakhs as per CT’s algorithm. The leg-spinner took only one wicket in the game but bowled 18 dot balls to restrict the opposition. Hardik Pandya’s replacement in MI’s playing XI, Pradeep Sangwan turned out to be the liable player of the game. 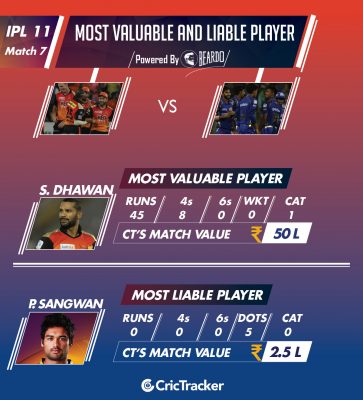 The young leg-spinner Mayank Markande’s 4-wicket was crucial in bringing MI back into the game after Sunrisers Hyderabad’s opening stand. His match’s performances valued at 49 lakhs while his auction price was 20 lakhs only. Markande multiplied his average salary price by 34.3 times. Mustafizur Rahman bowled the crucial 19th over giving one run and took two wickets and was valued at 36 lakhs. Billy Stanlake, who scored his first ever boundary in his professional cricket multiplied his average match salary by 8.26 times as his performances in the game were valued at 29.5 lakhs. 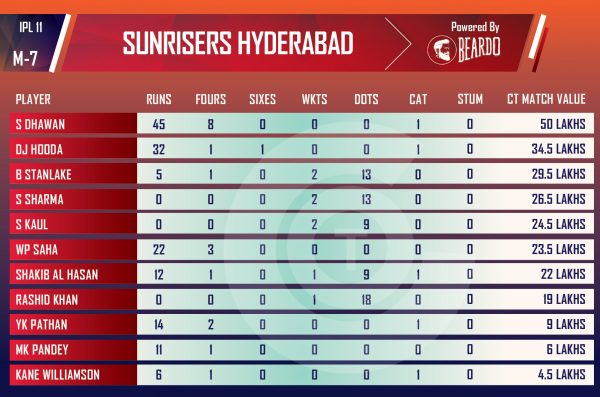 India’s limited-overs batsmen Rohit Sharma and Manish Pandey were quite ineffective as they could only cover their average match salary by 0.075 and 0.076 times respectively. Both the players scored 11 runs but the MI skippers’ retention price making a slight difference. 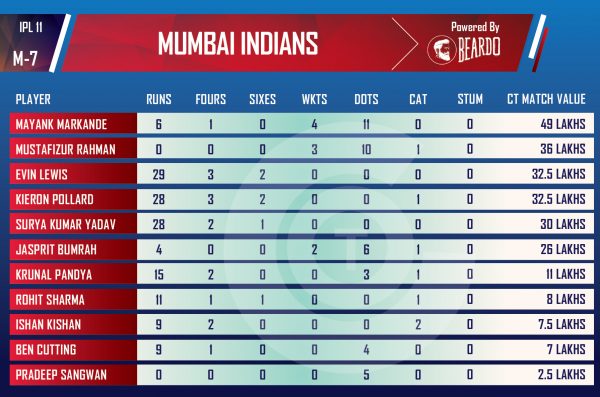