Will there be any changes to the team which defeated KXIP?

Chennai Super Kings (CSK) is the only team to have qualified for the playoffs or the knockouts in all the seasons they’ve played. The two-year suspension which kept them away from the T20 extravaganza has not at all affected their performance as they once again finished second in the points table which will see them getting two shots at the title clash. However, they will face Sunrisers Hyderabad (SRH), the table-toppers, in the first qualifier which will be played at the Wankhede Stadium on Tuesday.

The Men in Yellow began their come back season like a dream by winning 5 out of six matches but then lost their way a bit courtesy of their poor death bowling. Though they have tried to sort out the issues by the end of the league phase which was quite evident in the game against the Kings XI Punjab (KXIP) on Sunday. The team will have to bring their ‘A’ game to the fore for this clash as it will not be easy to go past the Orange Army who possess one of the strong line-ups in the tournament as well.

This is an encounter between two of the best teams in the league stage and it is very much possible that they might stack up against each other in the final as well. However, it is important for both the sides to concentrate on this game first as the victory will award them the ticket of the mega finale which will take place at the same venue on May 27. The loser of this game though will get another shot at it and will face the winner of the eliminator on Friday.

Here we bring you the predicted XI of CSK:

Shane Watson was rested for the last league match and the veteran needed it big time as he will come back fresh for the business end of the cash-rich league. The former Australian cricketer has been the biggest positive for the Men in Yellow this season and has played some scintillating knocks at the top of the order. If he manages to play another whirlwind knock, CSK might well find themselves in the final. His bowling skills will also be required and might need to fill in with a couple of overs in the crucial game of the tournament.

Ambati Rayudu has been the revelation this year with the bat. His performances in the league stage has bagged him a place in the national ODI side ahead of the World Cup next year. He will just have to extend his purple patch to couple of matches more in order to see himself lifting the trophy. Rayudu will be riding high on confidence and has 586 runs under his belt. He needs to continue in the same vein and the results will automatically follow.

Suresh Raina has never looked comfortable with his batting this season. He has scored 4 half-centuries and the latest of them came on Sunday during a tricky chase on a tough wicket. The stylish left-hander is a fighter and the possibility of him playing a defining inning in this game cannot be ruled out. He is touted as Mr IPL for his consistency over all these years and the time has come for him to take his game to a new level.

MS Dhoni has reinvented himself as the finisher this year. The veteran has remained unbeaten 9 times in 14 innings scoring 446 runs at an unreal average of 89.20. The most important thing for which he has copped a lot of criticism is his strike-rate. However, Dhoni has struck 157 runs per 100 balls in this season and has had one of the best IPLs in the recent years. His captaincy has never been in doubt and he knows how to handle his players in the knockout matches.

Sam Billings has not done much after a game-changing half century against KKR. After that knock, the promising right-hander from England has managed only 52 runs in 7 outings with the bat. He will to repay the faith showed in his game if his exploits are needed in this game. Moreover, Billings has been an excellent fielder for them saving runs while fielding inside the circal and at the boundary line as well.

The death bowler Dwayne Bravo has faded away as the season has progressed. Though he is the master of the slower balls and the yorkers, the Caribbean cricketer has missed his line quite often which miust be a worrying factor for CSK going into the playoffs. But they will be backing him to come good and should continue to bowl at least a couple of overs at the backend of the innings. His batting heroics were not required after the tournament and has an ability tonk the ball at will if the need arises in the upcoming matches.

Ravindra Jadeja’s role was under the scanner in the first half of the season as the skipper wasn’t using his left-arm spin bowling much and he was also batting down the order. He was promoted up the order in few games but Jaddu struggled to grab the opportunity. However, he has been bowling well now and won them the game against RCB in Pune on a slow wicket with a wily spell of four overs. His tight lines are tough to get away with for the batsmen and should be bowling more in the playoffs.

Deepak Chahar has been the best new ball bowler for CSK this year and one should not be surprised if Dhoni uses his four overs up front once again. The youngster has impressed everyone with his bowling and is only improving with every game. He will be tested in the knockout phase now and will have to raise to the occasion for his team. Harbhajan Singh is an IPL veteran and has experienced the pressure of must-win matches before. He is known to keep the lid on the run-scoring of the opposition and should look to do the same agaih.

Shardul Thakur has come into his own now which should please the team management. He has not been bowling more often at the death now and the a different role is suiting him well. He has been economical recently with his spells and has been able to land his variations properly. Lungi Ngidi is fresh off his magical spell of 4/10 against KXIP and will be tipped to do the job once again. He will take the new ball and can knock over the likes of Shikhar Dhawan and Kane Williamson which will put a lot of pressure on the underperforming middle order of SRH. 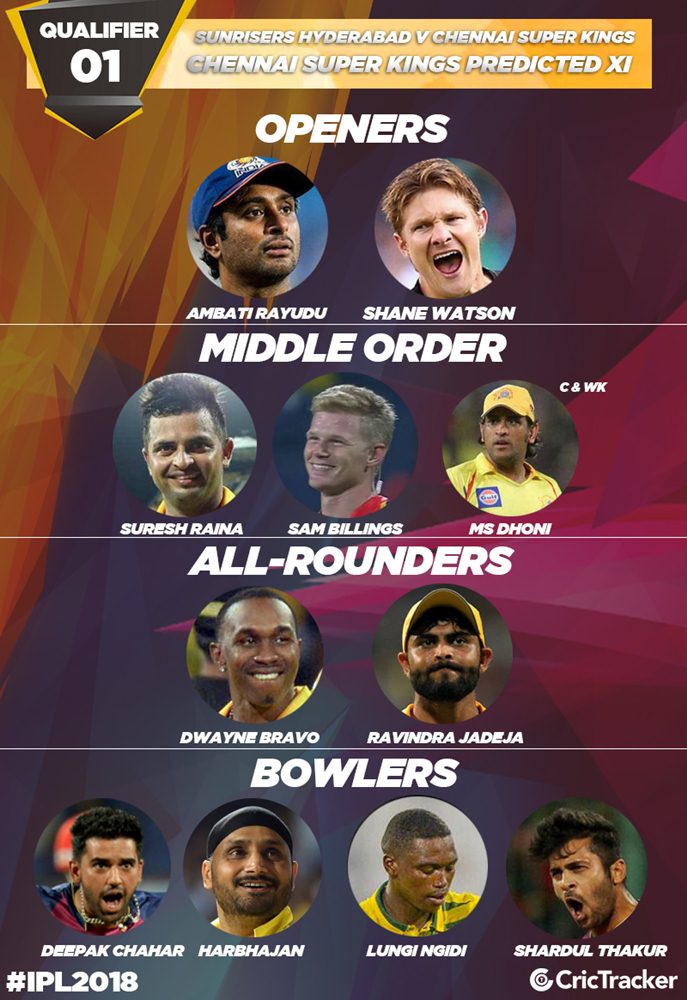