The franchise was aware of their earlier shortcomings and picked a decent contingent of fast bowlers this time around.

One of those franchises that needed the biggest overhaul was perhaps Royal Challengers Bangalore (RCB) not just because they were heavily dependent on their explosive batting line-up and lacked firepower in the bowling line-up, but also because they needed a team that suited the re-vamped M Chinnaswamy pitch.

They stuck to their strengths of having a heavy top order but also packed their line-up with some bowling firepower not just in terms of reliable fast bowlers but also a pretty strong spin bowling contingent. With the presence of Gary Kirsten, Daniel Vettori, Trent Woodhill and Ashish Nehra, the coaching staff looks fit to help the captain Virat Kohli.

They had already retained Virat Kohli, AB de Villiers and Sarfaraz Khan in the Retention on January 4. They went into the auction with 49 Cr after these three retentions. They expectedly used the Right to Match card for their ace leg-spinner Yuzvendra Chahal for 6 Crore initially and was followed by the spinning all-rounder Pawan Negi who had been very good for them last season for 1 Crore

The team was in dire need of a seam-bowling all-rounder and since Ben Stokes was a risky buy for them, they went for a player with the closest potential for a much lesser price- Chris Woakes for 7.4 Crore. Their next costliest player was Chahal at 6 Crore who has been their leading wicket-taker for two consecutive years. Spin bowling all-rounder and a talent for the future Washington Sundar was bought for 3.2Cr. Another interesting buy was pacer Navdeep Saini, it will be exciting to see how he does justice to the 3 Crore price tag.

Continuing with their habit of bulking up their batting, they have now ensembled a batting line-up with Brendon McCullum, Kohli, AB de Villiers, Quinton de Kock, Mandeep Singh, Parthiv Patel, Manan Vohra and Sarfaraz Khan. These are all specialist batsmen. They have made sure that they bat deep by investing in some quality all-rounders.

The two wicket-keeping options for RCB are both opening batsmen as well. One is in the form of de Kock and just in case he misses out Parthiv Patel is the Indian wicket keeper for back up. It is, in fact, a better idea for them to feature in the line up together. It makes the line-up much reliable but expect de Kock to keep because he is much better behind the stumps.

Since they have lacked the balance in all these years, they made sure that they cover their bases for all conditions by investing in all-rounders of both kinds. The seam bowling all-rounders include Woakes, Colin de Grandhomme. However, the list of spin bowling all-rounders is also a handful with the likes of Moeen Ali, Washington Sundar and Pawan Negi.

Their fast bowling attack finally looks powerful with the bowling all-rounders as well as Nathan Coulter Nile, Tim Southee, Umesh Yadav, Mohammed Siraj, Navdeep Saini and Kulwant Khejroliya wherein the NCN and Yadav duo can cater to their death overs’ problem. They have a full power spin attack led by Chahal, followed by Murugan Ashwin and then backed by the local boys who can both spin and bowl. 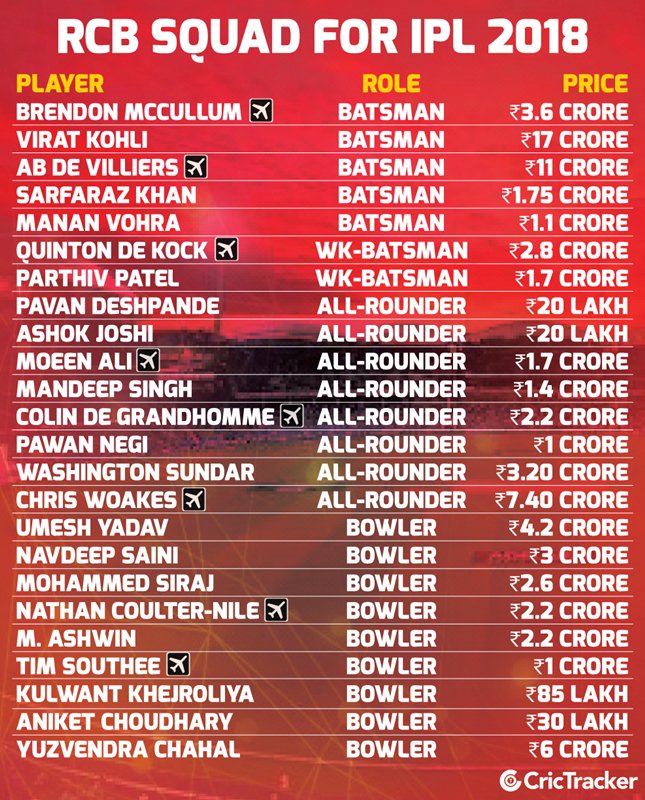