Mohali is set to play host to all their home matches.

It seems like a long time when the Kings XI Punjab had lived up to the promise they showed on paper in the IPL. It was the 2014 edition of the tournament when the Kings had taken the IPL world by storm with their string of big victories. However, ever since that season, they have only been a shadow of what they had promised to be. The team seems to have lost their plot horribly in the recent editions, and have often found themselves in the bottom half of the points table.

The Kings would certainly hope for an improved performance this season. They have some very talented players in their ranks in the form of KL Rahul, Mayank Agarwal, Karun Nair, Mandeep Singh, and many more. The young Indian batsmen are all vying for important open slots in the Indian cricket team, and good performances in the tournament could well serve their cases in the longer run.

When it comes to the bowling department, the team has bolstered the setup with the inclusion of Sam Curran and Mohammed Shami. Curran is being tipped to be one of the MVPs in the season. More good news has come to the KXIP den as the fixtures were announced for the season. Over the last few years, Kings XI Punjab have missed the home support due to logistical issues.

They have had other adopted home venues like Dharamsala and Indore. This season, Mohali is set to play host to all their home matches. The Kings will kick off their season against Rajasthan Royals in Jaipur and then travel Kolkata to play another away game. They will then finally reach their den in Mohali to host Mumbai Indians on March 30, and the Delhi Capitals on April 1.

A long flight to Chennai awaits the team next as they face off against the Chennai Super Kings, before taking a flight back to Mohali to play the hosts to Sunrisers Hyderabad. The last away game for the team would be on April 29 where they play the SRH team again in Hyderabad. This will be followed up with two home matches against KKR and CSK, and that would cap off the league stages of IPL 2019 for the Kings.

Here is the complete league stage schedule of the Kings XI Punjab: 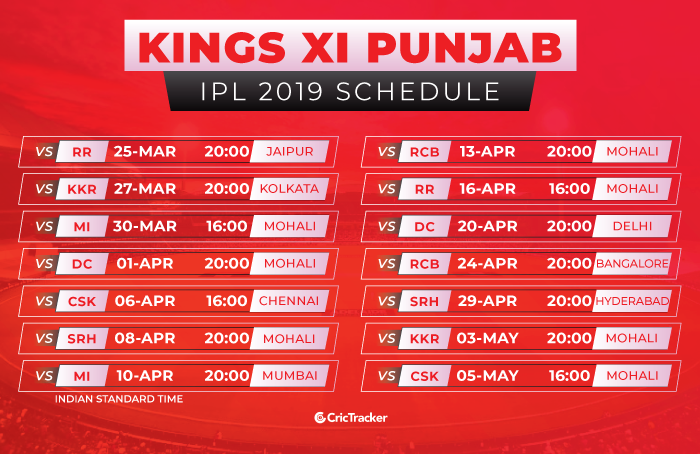